Squeezing Utility Bill Savings from Commercial PV Net metering or power purchase agreement? It depends on the customer and utility, but a study of North Carolina commercial customers finds that selling the PV generation yields the best savings, thanks to onerous net-metering charges. 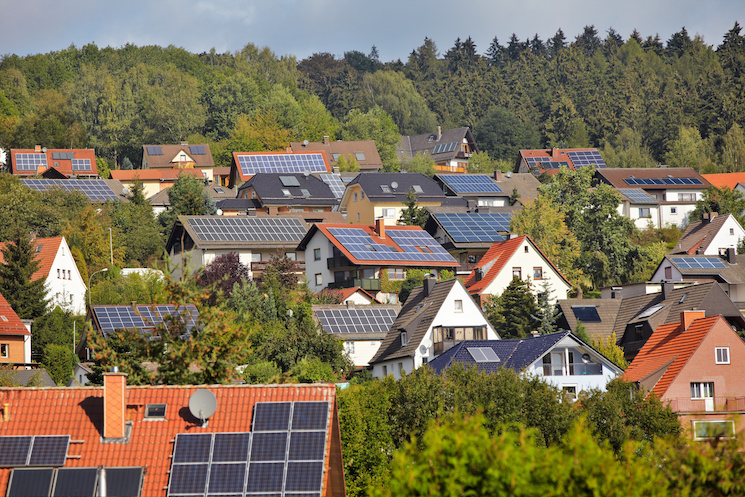 Large utility customers who install photovoltaic (PV) systems typically have two options for reducing their electricity bills. They may offset their energy usage by net metering with their utility company, or sell the generated power and renewable energy credits (RECs) to the utility or a third-party organization through a power purchase agreement (PPA). Both options will reduce a customer’s energy costs, but which will generate the most savings?

Most non-residential utility bills have two parts: energy usage charges and demand charges. The best option for an individual customer will depend on the size of its PV system, its energy usage and the rate structure of its monthly demand charge, as well as the utility’s net-metering and PPA options.

In most parts of the country, commercial customers can install solar and sell to the utility at the utility’s avoided cost through a power purchase agreement. State and local regulators have a lot of leeway in setting the avoided cost that applies. Often that means only a couple of cents, which won’t support a solar project. The customer can also sell the RECs from the project in most states, but the going rate for RECs in most markets is a couple of cents, or less, per kilowatt-hour. On the other hand, federal regulators have given some guidance that state regulators can look to a state renewable portfolio standard, or a solar carve-out within an RPS, to set a renewable- or solar-specific avoided cost rate. In addition, regulators have leeway to set time-of-generation rates that are generally higher during daylight hours. So, it’s possible that a power purchase agreement can be better than net metering.

Under net metering, most mid-sized commercial customers are demand metered, so their PV systems offset only the energy component of their bills. The energy rates vary nationwide, but generally they are a couple of cents more per kilowatt-hour than the avoided cost rates set by regulators, and almost all net- metering rules allow the customer to separately sell the RECs. However, North Carolina allows the utility to claim the RECs under net metering, making net metering less attractive in that state than in most other states. And, there are extra charges for net-metered systems in North Carolina that are not allowed elsewhere. So, net metering is usually a better deal for commercial customers, but North Carolina’s net-metering law is not as attractive. Determining which option will generate the most savings for a particular customer in a particular utility’s territory requires careful analysis.

We studied three commercial customer categories in Duke Energy Corp’s territory in the Charlotte, N.C., area to determine the best way for these customers to profit from their PV generation. Our study investigated different combinations of billing demand, system size and options for using or selling the electricity produced. We found that based on today’s options, the most cost-saving choice for Duke Energy’s commercial customers is to sell their generated power on a purchased power non-hydroelectric (PP-N) rate, Duke’s term for a PPA. Doing so will reduce the customer’s per-kilowatt-hour rate, as well as its annual energy bill.

The Solar Market Insight report, published by the Solar Energy Industries Association, identifies trends in the U.S. solar market and predicts solar installations by state for the next five years. The report analyzes the differences in incentives, customer types and project development timelines. The 2012 report predicts 25 to 30 percent growth in PV projects and a drop in system cost from 2012 to 2016. North Carolina alone is projected to install 137 commercial photovoltaic projects in the next three years. Most of these systems will be monitored and put on either a purchase power negotiation rate or net-metering rider for the energy generated.

Currently, North Carolina’s average PV installed price for non-residential is $4.67 per watt, compared to the national average of $4.51 per watt. However, this average can be mislead- ing because non-residential projects are often larger than 1 megawatt (MW), and smaller systems tend to have a higher unit cost. Whether the customer net meters or sells its system’s generated power affects the customer’s overall energy costs.

Investor-owned utilities operating in North Carolina are required to file annual reports with the N.C. Utilities Commission indicating the number of net-metering applicants. Among these, Duke Energy Carolinas filed a report of interconnection requests for the period of March 25, 2011, to March 25, 2012. The report listed 213 PV system-interconnection applications — both residential and non-residential — that were approved or in process. In the report, customers with systems larger than 50 kilowatts (kW) typically chose a PP-N schedule to sell their electricity to the utility company. Of the 34 customers with PV systems larger than 50 kW, only four were not on a PP-N rate structure.

In the Duke Energy territory, net metering requires the customer to add a net-metering rider and standby charge to its current rate schedule. That’s unusual; most states don’t allow extra charges for net-metered customers, which is part of the reason why net metering is the less attractive option in North Carolina. Duke’s PP-N option allows the customer to continue on its current rate structure without adding a rider or standby charge. The customer sells the system’s generated energy to the utility company at a variable rate or a fixed long-term rate.

Utility customers generally are not given detailed information about what option benefits them most based on their utility profile and PV system size. To compare the two, the customer has to look at its projected utility bill with net metering versus its projected bill without net metering minus payments received from the utility under a PP-N. Complicating matters further, it’s hard to project what the utility will pay for energy when the term of the PP-N is over (Duke has 5, 10 and 15 year PP-Ns available, as well as a variable rate PP-N).

We studied Duke Energy’s commercial customers of three sizes, from 25 kW to 300 kW, to estimate how different PV system sizes and options benefit the customer. Additionally, we used PV Watts to estimate net- metering and PP-N options for each PV system size.

Not surprisingly, our study found that the overall utility bill for each customer decreased with increased system size. For each system size category, we estimated the annual utility bill on a net-metering arrangement, PP-N variable rate, PP-N five-year, PP-N 10-year, and PP-N 15-year rates (see tables 1, 2 and 3). We accounted for demand reduction with the net-metering option. The PP-N rate had a larger effect on the utility bill than net metering in all cases. The PP-N rate appeared to be the best option for commercial customer PV systems, based on their effect in decreasing annual utility bills.

In addition to the annual utility bill being lower under a PP-N rate, the per-kilowatt-hour rate for each customer was also lower under the PP-N rate (see tables 4, 5 and 6). The customer’s average billing demand and PV system size affect the range the customer pays per kilowatt-hour, but a PP-N rate was always less than net metering in our study. In general, a customer on large general service rate schedule pays less per kilo- watt-hour on a PP-N rate.

TABLE 4: $/kWh for Customer with Average Billing Demand of 126 kW

Our study had several limitations. The first limitation was a lack of data on the annual fluctuation in the energy prices for customer rate schedules and PP-N rates. Therefore, this study estimated only year one for the options described in the methodology. Also, under the PP-N the variable rate is said to fluctuate over time, but those fluctuations cannot be predicted. Therefore, this study looked at the variable in year one.

TABLE 5: $/kWh for Customer with Average Billing Demand of 320 kW

Customers have additional options, such as NC GreenPower, for profiting from their systems’ generated energy. However, NC GreenPower does not disclose how much it pays for solar RECs for systems larger than 10 kW. Information about past projects is not public knowledge, because it goes through a bidding process.

Despite these limitations, our findings may help customers choose the best option for generated power based on their billing demand and PV system size. Currently, the best option for Duke’s commercial customers in North Carolina is to sell their generated power on a PP-N rate. A PP-N rate will reduce their annual utility bills. Unless the net-metering rider improves and reduces charges (e.g., standby) to be more favorable for customers, the PP-N rate is very likely to continue to be more attractive for commercial customer PV systems.

TABLE 6: $/kWh for Customer with Average Billing Demand of 377kW

One suggestion to improve net metering is to remove system size limitations, allowing customers to meet all on-site energy needs. The current system size limit is 1 MW, and any system larger than 1MW has to be put on a PP-N rate or another negotiated rate. Another way for utilities to improve net metering is to adopt safe harbor language to protect customer-sited generators from extra and/or unanticipated fees. Right now customers are charged standby fees based on system size and extra facility charges per month. Also, limitations on REC ownership should be removed for customers that choose to net meter. Until then, PP-N rates benefit a customer more on both the energy rate and the annual utility bill.

Kacey Hoover (hooverkj@appstate.edu) has a bachelor’s in environmental science from Catawba College and is pursuing a master’s in Technology with a concentration in Appropriate Technology at Appalachian State University. She works as an energy analyst and specializes in rate structure analysis and estimating utility bills. Her interests are in modeling system performance and economic gain for renewable energy systems.

The author and SOLAR TODAY would like to thank Jason Keyes, a partner at Keyes, Fox & Wiedman LLP and an expert in distributed generation and renewable energy law, for his review of this article.