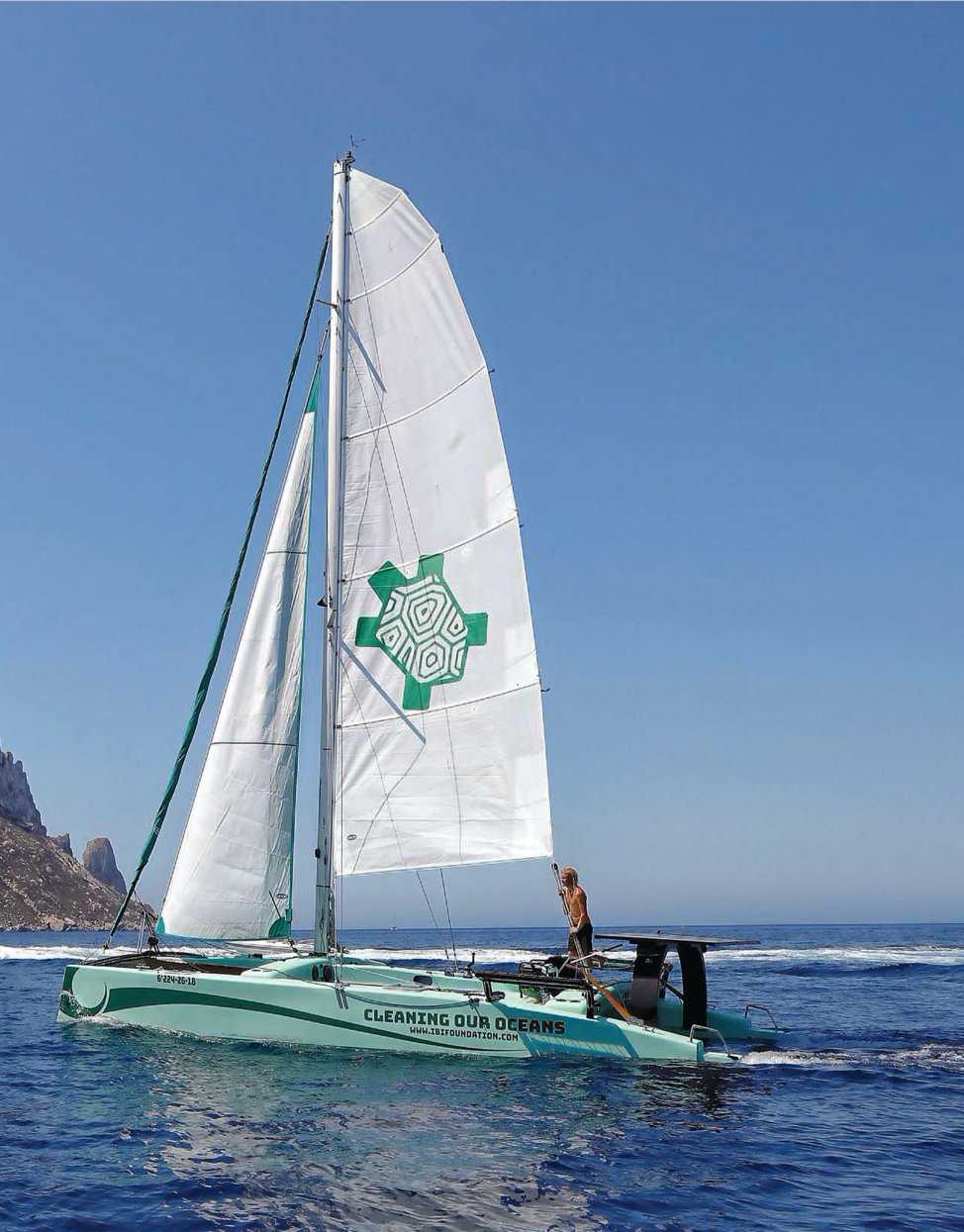 The Spanish Mediterranean island of Ibiza has a dedicated target to become free from single- use plastic by 2023. With the recent launch of one of the world’s first solar powered clean-up catamarans, 2019 signifies a major step towards this action. The initiative by the iBi Foundation (https://ibifreelife.nl/en/) includes a unique ocean clean-up system that filters and removes plastics from the water. The robust structure is paired with eco charter La Bella Verde’s 100% emission free boat named ‘iBi’, powered entirely by the elements.

The idea was initially raised by Ed en Joke from the iBi Foundation after they found a struggling sea turtle caught in plastic and unable to swim in the open sea just off the Ibiza coastline.

Launched in 2014, La Belle Verde has grown their solar-powered fleet to seven this year. Since the company’s inception, the team has transformed traditional boats into eco-friendly modes of transportation with the use of electric engines and advanced solar panels. Last Fall the team launched their own solar catamarans into production. They were awarded the Palma Boat Show Award for most innovative design by Institut d’Innovació Empresarial de les Illes Balears IDI.

Bella Verde eco-charters depart daily throughout the summer until mid- October from San Antonio, Santa Eularia and Las Salinas beach. The Las Salinas route forms part of one of the islands protected natural park and home to a diverse ecosystem that stretches from South East Ibiza to Formentera.

1% of every eco-charter is also donated to La Bella Verde Foundation, designed to protect the biodiversity at Salinas Nature Park–including protecting the Posidonia, a rare seagrass endemic to the Mediterranean Sea. This area is one of the few locations where Posidonia oceanica (commonly known as Neptune grass or Mediterranean tapeweed) exists. It forms large underwater meadows that play an important part for the local ecosystem encouraging its habitat. Dating as far back as 100,000 years, one of the oldest and longest clonal colonies of Posidonia known on earth lives between the south coast of Ibiza and northern Formentera. This has led to the Park being declared a World Heritage site by UNESCO in 1999.

Posidonia oceanica is a higher plant species that differs greatly from algae, with leaves, stalks and roots, as well as flowers and fruit. Its flowers indicate that this plant was once a land plant that has adapted itself to life underwater, where the flowers do not need to attract insects for pollination or pollen transportation. They are particularly known for supporting the balance of sediments by forming barrier reefs, maintaining the coastline and protecting beaches from erosion. Across the sea bed, Posidonia dramatically increase the amount of oxygen and natural filters in the ocean, leaving it purer and more crystalline than anywhere else in the world. These waters feed the magnificent salt pans of Ses Salines de Formentera.

Plastic and fuel-based pollution have a critical effect on the Posidonia seagrass. Volunteers are welcome to enjoy sailing for the day around Ibiza and the Balearic Islands, while clearing up the ocean through this new system. Full-day eco-charters allow for a complete exploration of the surrounding turquoise waters and the white-sand coves of Formentera and its nearby isles. Staying true to the company’s ethos, gourmet lunches made with organic and locally sourced island produce, seasonal vegetables are served on board or on a secluded beach.

The name La Bella Verde, or “The Beautiful Green” is a signal of what the founders have sought to create – an intimate, low-impact experience, making positive change in the wider boating industry internationally. The company was founded by friends Charlie Priestley, Alistair Glover-Main and Maarten Bernhart with a collective dream of offering an eco-boating experience.

They are also involved with local initiatives including school education days around ocean protection, working with sailing schools and organizing beach clean ups.

Sunita Dhaliwal is the founder of The Everyday Agency, a creative marketing agency in Ibiza with a vibrant mix of clients including conscious leaders, electronic artists, lifestyle, music labels, festivals, club venues and global public speakers.