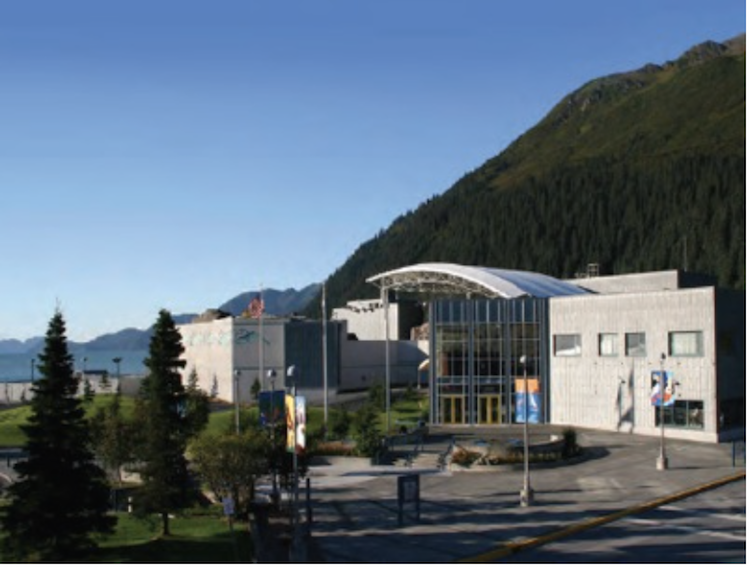 In December 2012, Operations Manager Darryl Schaefermeyer turned off the boilers. The facility is now heated, right through the sub-arctic winter, by a seawater heat pump.

Heating costs have fallen by half.

Solar gain in the North Pacific Gyre is carried by trade winds into the Alaska Coastal Current, which keeps the bay ice-free through the winter. Because it’s more than 900 feet deep, the bay is an immense thermal mass. Despite the inflow of glacier melt, the water reaches 52°F (11°C) by late October and falls only to 37°F (3°C) by spring. Similar natural systems are exploited by heat-pump systems in Norway and Canada.

At the aquarium, electric pumps push seawater through a titanium-plate heat exchanger to warm a mixture of glycol and water. The cooled seawater returns to the ocean. The glycol passes through two parallel rotary screw compressor heat pumps, where it comes into contact with R-134a refrigerant.

The heat pumps are Trane RTWD units manufactured in Pueblo, Colo. The refrigerant boils and the vapor is compressed, which raises its temperature. The hot high-pressure vapor goes through another heat exchanger, heating fresh water to 100°F to 120°F (38°C to 49°C). This hot-water loop is pumped to air handlers to warm ventilation air, preheats the 600-gallon domestic hot-water tank, and melts snow and ice on outdoor pavement.

The pumps and accessories run on grid electricity at 11 cents per kilowatt-hour (generated 85 percent with natural gas, 15 percent from hydro). For 2013, comparing electric power used to heat produced yields a system coefficient of performance of 2.77, representing a 277 percent efficiency increase over straight electric heat or fuel oil. For 2013, the SeaLife Center saved an average of $9,800 per month on heating bills compared to the old oil-fired boilers.

Built for $830,000, the heat-pump system will pay for itself in less than nine years, with CO2 emission reduction of 420,000 pounds per year. The SeaLife Center received $713,000 in federal and state grants to design and install the system.

While 80 percent of heat loads are now on the seawater heat-pump system, loads requiring temperatures higher than 120°F (49°C) are served by an electric boiler. The State of Alaska has provided an emerging-technology grant to design and install new heat pumps using CO2 refrigerant. The new pumps will operate at vapor pressures up to 2,000 psi and produce hot water up to 194°F (90°C) — all using Resurrection Bay as the heat source.

The SeaLife Center draws about 160,000 visitors each year to see Steller sea lions, harbor seals, sea otters, rare seabirds and fish from all depths. More than 90 staffers, plus interns and volunteers, work on marine research and ocean wildlife rescue.