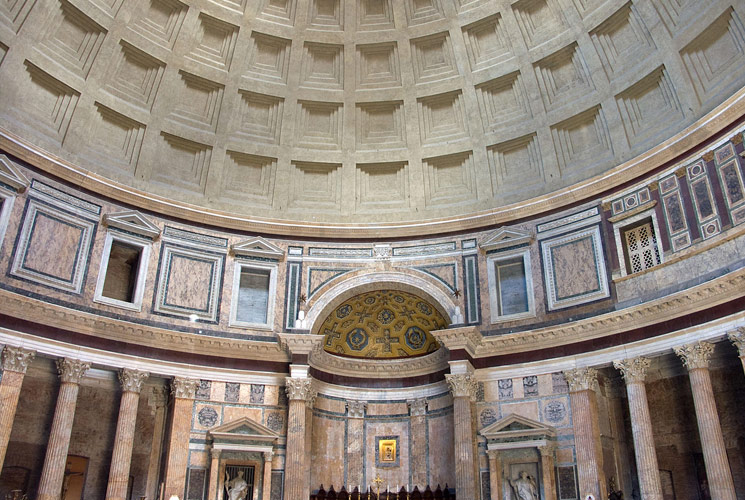 The Pantheon in Rome is an example of Roman concrete construction.

Berkeley mineralogist Marie Jackson found that the Romans used much less lime, and baked it at 900 ̊C (1,652 ̊F) or lower, requiring far less fuel than we use today.

An international research team led by Paulo Monteiro of Lawrence Berkeley National Laboratory (Berkeley Lab) has analyzed the chemistry of a concrete breakwater, submerged for 2,000 years, and found why the best Roman concrete was superior to most modern concrete in durability, why its manufacture was less environmentally damaging, and how these improvements could be adopted in the modern world. The work has implications for low-carbon architecture and durable engineered structures.

“It’s not that modern concrete isn’t good — it’s so good we use 19 billion tons of it a year,” says Monteiro. “The problem is that manufacturing Portland cement accounts for 7 percent of the carbon dioxide that industry puts into the air.”

Portland cement is the “glue” that holds most modern concrete together. It’s made by mixing limestone and clays to 1,450°C (2,642°F) — a process that releases huge volumes of carbon. Berkeley mineralogist Marie Jackson found that the Romans used much less lime, and baked it at 900 ̊C (1,652 ̊F) or lower, requiring far less fuel than we use today.

Cutting greenhouse gas emissions is one powerful incentive for finding a better way to provide the concrete the world needs; another is the need for stronger, longer-lasting buildings, bridges and other structures.

“In the middle 20th century, concrete structures were designed to last 50 years, and a lot of them are on borrowed time,” Monteiro says. “Now we design buildings to last 100 to 120 years.” Yet Roman harbor installations have survived 2,000 years of chemical attack and wave action underwater.

Roman concrete mixed about 10 percent lime and volcanic rock. For underwater structures, lime and aluminum – rich pozzolan volcanic ash were mixed to form mortar, then packed with volcanic tuff into wooden forms. Seawater combined with lime in a hot chemical reaction, cementing the composite together.