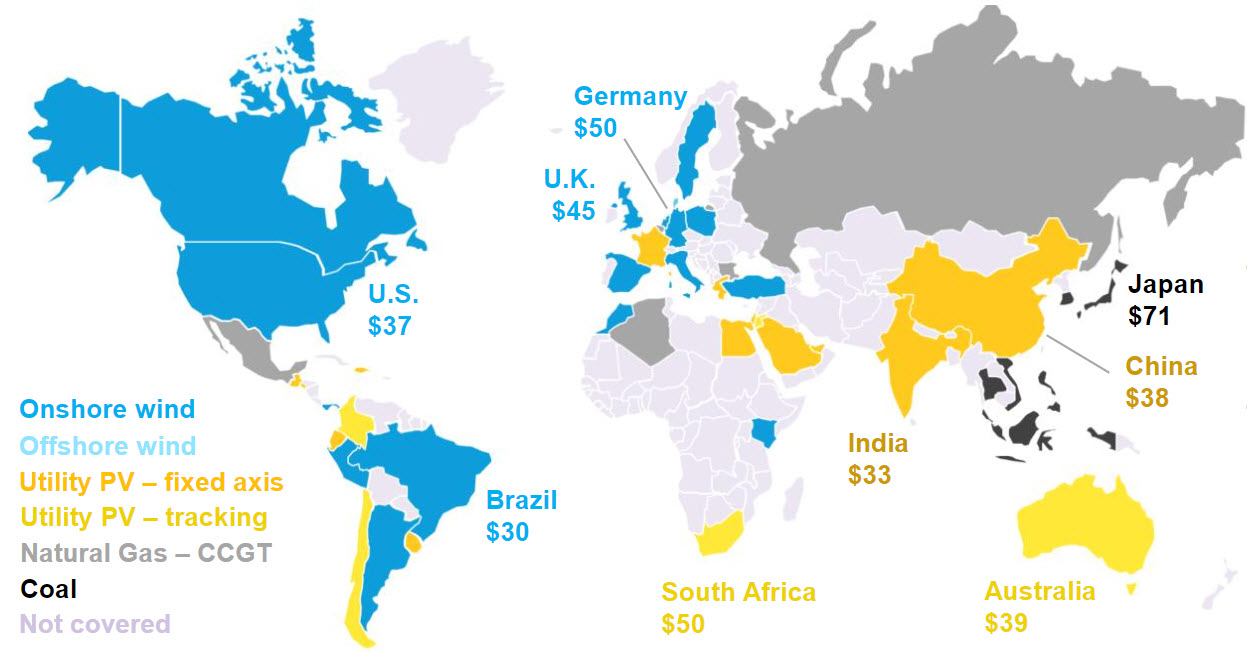 Levelized cost of electricity (LCOE) calculations measure the average net present cost of electricity generation for a generating plant over its lifetime and exclude subsidies or tax-credits. Graph shows benchmark LCOE for each country in $ per megawatt-hour. CCGT: Combined-cycle gas turbine. Courtesy of: BloombergNEF

Whatever life throws out – are we as a society, a government, a person able to take the punch? What happens if a certain event is not singular at all, but rather a portfolio of risks that coincide?

The U.S. has an old grid, both long distance transmission lines and local distribution lines are seriously aging. According to Americans for a Clean Energy Grid (ACEG), “Begun in the early 1900’s when the power system consisted of large, isolated power plants, our current grid is ill-equipped to serve smaller, innovative solar or wind facilities. The majority of the existing system was built more than 30 years ago and has only received incremental investment since. Today, 70% of the lines and large power transformers are more than 25 years old, and we don’t have enough of them in areas of the country with the best new energy resources.” Besides aging infrastructure, the modern grid faces the increasing threats of cyber security attacks, climate change impacts, and unpredictable disruptions due to wildlife.

As our grid becomes modernized, cyber security has become a critical threat that the current grid is barely equipped to handle. According to the National Association of Regulatory Utility Commissioners (NARUC), “Every aspect of society – from critical infrastructure, banking, education, and healthcare – relies on safe, reliable utility services and communications networks.”

The Cyberspace Solarium Commission, which was created to re-imagine military doctrine for this new digital reality, states that “the battles of the future will be fought on our nation’s energy infrastructure, telecommunication networks and financial systems.” Since over 87%of the critical infrastructure in the U.S. is owned by private industry, the collaboration between the private sector and government in protecting our American way of life is more vital than ever.”

Along the same vein, physical acts of terror also pose a threat to the power grid. In September 2017 a leader of Atomwaffen Division (AWD), one of the country’s most dangerous extremist groups, disclosed their knowledge of a map of the U.S. power grid. Another member claimed the group had planned to use a cache of explosives and weapons to attack the nation’s power grid, nuclear reactors and synagogues, and last month, the FBI arrested five members of the AWD across four different states.

Another threat to the national power grid is much larger than any human influence; the climate is changing in ways we are only beginning to understand. The polar vortexes historically limited to northern Canada now dip down below the Mason Dixon line, and heat waves historically limited to the equator are reaching to the northern United States, bringing unstable weather and flooding with them.

According to the Proceedings of the National Academy of Sciences (PNAS) of the United States of America “Future of the human climate niche,” global warming will affect ecosystems as well as human health, livelihoods, food security, water supply, and economic growth in many ways. The impacts are projected to increase steeply with the degree of warming. For instance, warming to 2°C, compared with 1.5°C, is estimated to increase the number of people exposed to climate-related risks and poverty by up to several hundred million by 2050. It remains difficult, however, to foresee the human impacts of the complex interplay of mechanisms driven by warming. The impacts of climate change will not affect us equally; some regions may face declining conditions for human well-being, while conditions in other places will improve. Ultimately, the impact on our well-being will depend on our own societal responses to these changes.

Another threat to the power grid that is not to be underestimated is wildlife disruptions. In 2015, there were 89 outages related to squirrels according to the Eaton Blackout Tracker. It’s not just squirrels; snakes and raccoons can also do their fair share of damage. Animal-related outages are the fifth highest cause of power outages in the U.S., according to Eaton, with 149 total outages in the 2015 year. The complex solution of protecting a substation against animal intruders can cost millions, the Eaton report found.

But wait, there is good news!

Four technological and capability breakthroughs that have been happening in parallel — and now are beginning to merge together to become mutually supportive.

The first of four technological breakthroughs revolves around renewable energy generation. These technologies – including solar, wind, geothermal, and water & marine energy – have seen technological and financial progress for a decade. Solar PV and onshore wind have become the cheapest sources of new-build generation for at least two-thirds of the global population.

This same upward trend has been happening as fast for the second technological breakthrough of battery storage, and other energy storage options – including pumped hydropower, compressed air and liquids, flywheels, hydrogen, thermal storage utilizing thermal salts, phase change materials, ice, coatings and films, among other options.

For instance, Lawrence Berkeley National Laboratory’s and the Electric Power Research Institute’s  March 23, 2020 report,  “Motivations and options for deploying hybrid generator-plus-battery projects within the bulk power system.” looks at the operational benefits and drawbacks, relative costs and benefits, and industry trends toward hybrid power plants. Interest in hybrid plants is high, and hybridization can offer benefits relative to stand-alone plants. The report also finds that there are limitations to hybridization, and market rules and policy incentives can make or break the finances of a project.

The third breakthrough includes advanced software, sensors and controls, and apps that have been proliferating at warp speed. We can now have sensors on every circuit breaker, appliance, office machine, or motor to see exact electric loads and energy usage by time-of-day and function. A series of management software that interface with thermostats, energy storage systems, and the electric meter also are being absorbed into the market. This allows for unprecedented levels of optimization, saving money and energy.

Microgrids and technology optimization which we now call net-zero or zero-energy buildings manage the energy generation and energy and water usage in ways we could not accomplish a decade ago. They allow the buildings or microgrid to interface with the electric grid or seamlessly disconnect from the electric grid to assure continuity of operations. This assists the electric utilities in addressing frequency control, power quality (surges, sages & transients), and electric grid stability in fundamental ways.

Navigant Research has released a Microgrid Deployment Tracker identifying 2,179 new projects. As the energy sector continues to evolve, microgrids are being employed as solutions for issues related to resilience, renewables integration, and grid stability. North America and Asia Pacific are the two leading world regions for deployed microgrid capacity, accounting for 36% and 30% of total global capacity, respectively. Asia Pacific is largely home to small-scale remote microgrids whereas North America has much higher levels of deployment in the commercial and industrial space. Other trends include the emergence of Texas as a leading microgrid state and a noticeable uptick trend in deployment of modular microgrids.

COVID-19 is our most recent threat and surely has an impact on energy and energy security. According to an April 13, 2020 Fortune magazine article,“America’s 51,000 coal miners are exceptional conduits for the COVID-19 virus.” A Mining Technology article reports, “the coronavirus (Covid-19) pandemic may increase the burden for the already struggling coal miners in the U.S., as three companies announce suspension of operations in the country to contain the spread of the virus.” Pop-up clinics that have been set up all over the world need electricity, clean water, telecommunications, and disinfecting lighting systems.

Continuity of operations is an essential component regarding our ‘Critical infrastructure,’ and in an industrialized country such as ours, basic infrastructure includes:

Some samples of installations representing energy trends are worth highlighting:

TELECOM: Navigant Research issued their predictions in their September 25, 2018 report, “Market Data: Distributed Generation and Energy Storage in Telecom Networks.” Global telecom network providers are expected to install nearly 113.5 GW of cumulative new distributed generation (DG) and energy storage (ES) capacity between 2018 and 2027. With an increasing emphasis on reliability, DG and ES technologies are logical solutions to ensure the continuous operation of telecom networks, regardless of location or external factors.

WATER-SEWAGE: Water purification and water and sewage pipeline pumps are also a critical function. One of the oldest U.S solar system integration companies, World Water & Solar Power (NJ) produces a wide range of highly mobile, deployable solar water systems designed to pump water and provide auxiliary power for farming and remote operations. These platforms do not require a connection to the electric grid nor a supply of diesel fuel.

HOSPITALS: The children’s hospital in Puerto Rico that was forced to run off generators and ration diesel fuel in the wake of Hurricane Maria now has a solar power and battery system from Tesla that supplies all of its electricity needs.

DATA CENTERS: Navigant Research’s December 4, 2018 report, “Sustainable and Renewable Power Generation for Global Data Centers,” shows global annual revenue for distributed power generation in data centers expected to grow from $3.9 billion in 2018 to $6.7 billion in 2027. Investment in cloud storage, co-location, and hyperscale data centers has resulted in the construction of a large volume of new data centers globally, thus increasing energy consumption. Consequently, the perceived benefits of distributed and renewable resources (like wind and solar PV) for both primary and critical power supply are gaining attention among data center operators. There is a compelling case for data centers to evaluate distributed generation along with demand response and grid interactivity – strategy is likely to gain market acceptance in the next 3-5 years and offer rapid ROI across the globe.

The owner of the Mineral Gap Data Centers on the proposed $4.6 million solar project on the Wise County site paired with Sun Tribe Solar, based in Charlottesville, paired with, which was last mined in 1957. By providing up to 3.5 megawatts of renewable power to the on-site data centers, the project would decrease the centers’ operating budget and peak-load demands on the local distribution grid. The Wise County solar farm was one of 10 economic development projects approved for federal grants by the Virginia Department of Mines, Minerals and Energy.

Global threats, national threats, and local threats aren’t going to go away. These over-arching scientific, technological, and economic trends are pulling optimization of renewable energy, high-value energy efficiency, energy storage and smart IT as a key solution set to drive and power our critical infrastructure for continuity of service and operations. And it is unstoppable.

Scott Sklar is President of The Stella Group, Ltd.. a strategic technology optimization and policy firm for clean energy users and companies, with a focus on system standardization, modularity, and web-enabled diagnostics. Scott Sklar is an Adjunct Professor at The George Washington University teaching three unique interdisciplinary sustainable energy courses including the first course in the USA on “Renewable Energy & Critical Infrastructure”. Sklar is the Energy Director at GWU’s Environment and Energy Management Institute (EEMI).