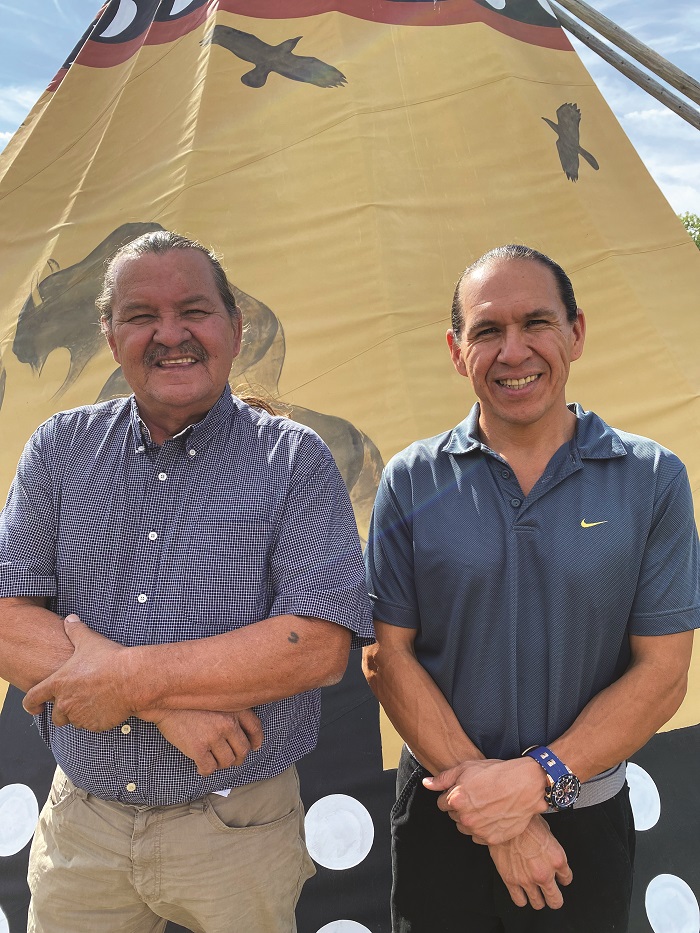 One way Native Americans are reclaiming their power is by exchanging information. Indigenous community members are creating safe places, both on and off the reservations, where people are able to learn with and from each other and share wisdom in ways that feel appropriate to them.

It is a version of school that might not look like a traditional school setting, but it’s a place where the traditional ways of Native Americans are maintained and new ways are considered. In these spaces there is choice, not forced ideas and identities, and indigenous students have indigenous teachers.

Another way Native Americans are reclaiming their power and their connection to the land is by transforming their land into demonstration sites. People get hands-on experience that is fuel for the solar soul, with less theory and more real-life applications. There are fewer extractive behaviors and there is more care, respect and compassion for Mother Earth.

Solar empowerment and education centers are leading the charge, ensuring that Native American nations continue to be sovereign in areas like education, energy and food. Tribe-led training centers build partnerships with each other, braided together like sacred sweetgrass. They are healing the damage that came from colonization and racism, as well as the lack of opportunities, funding and dignity.

Chief Henry Red Cloud of the Oglala Lakota, now the executive director of Red Cloud Renewable,1 noticed this need a decade and a half ago. He didn’t see Native Americans teaching. He seemed to be the only one studying solar. He noticed that there weren’t any opening prayers or closing ceremonies in the classroom.

Instead of confronting schools around curricula, championing policy changes or getting frustrated and doing nothing, Red Cloud took action. He started his own renewable energy-training facility. It didn’t take long for people to show interest and students to register.

Soon, others followed by creating their own versions of RCR on their tribal lands. For example, JoAnn Armenta of Purpose Focused Alternative Learning realized the organization could be replicated within the Diné Nation.

Later, Armenta partnered with Don Yellowman’s Forgotten People Community Development Corporation.2 She used her educator background to advocate on behalf of the membership who wanted to be heard and recognized when developing community-based plans for rehabilitating their lives and lands. But they were not done.

To gain more knowledge on tribal rights and energy sovereignty and to network with other like-hearted people, Yellowman made several trips from Navajo land. He studied at RCR to bring back knowledge to the Navajo Nation (Diné) people who have been negatively impacted over the centuries. He continues efforts to empower the Diné to become solar-trained technicians. To date, 12 Diné people have been trained at RCR and are currently applying their technical expertise installing solar systems for families with the highest need.

RCR has had over 100 Native American students attend its solar training. Clyde Brown, who later founded Sun Spirit Solar and is from the Chippewa Cree Tribe, is one of those graduates. He is now a full-fledged solar advocate on the Rocky Boy Reservation who knows renewable energy is one of the best and brightest ways to a more sustainable future.

Brown had the chance to study at Solar Energy International in Paonia, Colorado, but chose to study at RCR. He wanted to be in an environment that was familiar to him, with lots of humor and cultural practices.

For years, as a member of the Rocky Boy Energy Commission Board, Brown championed solar and renewable energy, but it was a hard sell to the community and to leadership. They wanted solar, but the investment aspect was a challenge.

Brown realized he could make bigger strides if he provided real-life examples of solar, so he started his own solar business, Sun Spirit Solar.3 He knew that showing over telling would be the key to buy-in.

Shortly after he returned home from studying at RCR, a local tribal college offered him a job constructing solar-powered sheds that carried wastewater away and detected pathogens.

Powered by solar ground-mount technology, those sheds test waters twice a day and provide an alert system that is a source of disease mitigation. This means that they save people’s lives. Brown is an empowered solar warrior for his community because of this educational opportunity.

Schools and education are changing, but not quickly enough. For some, waiting for legislation or administration is no longer an option. Native American community leaders recognize that delaying any longer would be a mistake – their situations are too delicate and children too important. Instead, they are becoming the change they want to see in the world.

Phrases like decolonizing education are not just buzzwords. They are movements that highlight the importance of Native American presence and cultural preservation within an educational setting.

Conventional education has endorsed certain expectations, not all of which are culturally appropriate. The standard North American school training was created for and by non-Native Americans. Therefore, cultural sensitivity training for both teachers and students has been omitted from most collegiate conversations. Non-Native Americans tend to dominate the educational landscape as the school staff and the narratives in textbooks.

What inspires someone to take measures into their own hands is the realization that educational institutions were created for some to be successful but not for all. Rather than working within a system predicated on little to no expectation of Native American success, let alone survival, people are reclaiming their power and their connection to the land. Information exchanges that align with their values and identities are a way to ensure Native American presence well into the future. One way to do that is by asking: Will this system help or harm people seven generations down the line?

Solar energy training sites are becoming the sunrays of the future – giving Native American communities the chance to build with the seventh generation in mind. Harnessing the power of the sun for energy sovereignty, right relationship with Mother Nature, and generational respect enlivens these educational spaces. Solar energy isn’t just a way to power up; it highlights how all systems work in unison.

What we learn from these Native American-led educational operations is that with faith and perseverance, things of beauty triumph over habits of damage and destruction. Indigenous-led education advances social, racial and environmental justice.

These teachers and students are, piece by piece, building a better world, right now as you read this. They are meeting with other community members to share their solar training knowledge, putting solar on elders’ homes, talking to schools about using solar water pumping for school gardens, meeting with ranchers about solar water pumping for livestock, talking with passion and from experience on the solar way of life, and speaking from their cultural traditions and from the heart.

Native American-led educational spaces are rising like the sun. Let’s honor their leaders and encourage their students in solar.

Reach out to any of the organizations mentioned in this article to learn more about how you can get involved!

Become an ASES member, unlock exclusive web content, and have a quarterly print issue of Solar Today mailed to you.