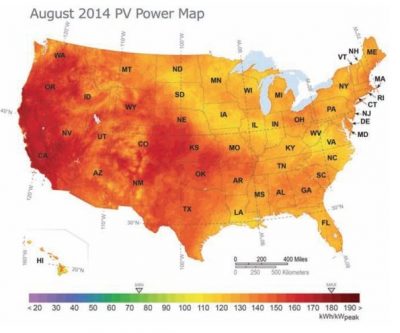 The PV Power Map is a report of national solar resource availability as illustrated by the monthly energy output of a nominal 1-kilowatt (kW) photovoltaic (PV) system by location. In addition to the monthly PV Power Map, this issue also includes a PV Power Variance Map, which highlights how energy production in August 2014 compared to the typically expected August energy-production profile.

For example, a 4-kW system in Portland, Oregon, would have produced approximately 600 kilowatt-hours during August (150 kWh x 4 kW = 600 kWh), which was approximately 17 percent above typically expected August production.