Partner up for Community Solar 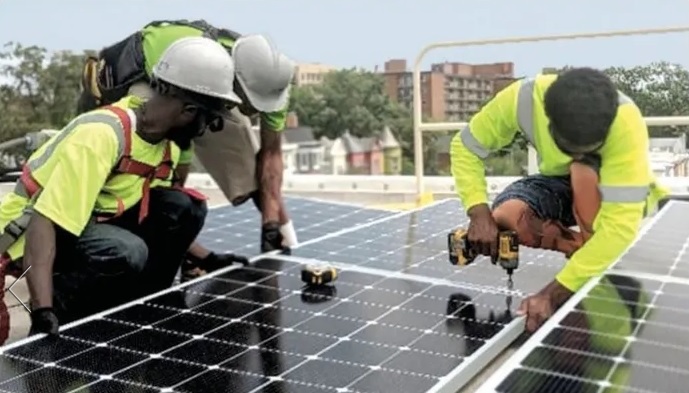 This 234-kW rooftop solar installation on Ludlow-Taylor Elementary School in Washington, D.C. demonstrates multiple benefits that community solar can bring. It serves as an onsite educational resource for the school while all the solar energy generated goes directly to assisting low-income households in the community. The project was supported in part by the D.C. Department of Energy and Environment, which is one of a thousand partner organizations in the NCSP. (Credit: Gabriella Laverghetta)

Nicole Steele calls herself “a forever optimist.” As the senior advisor of energy justice & workforce at the U.S. Department of Energy, Steele is charged with mobilizing a coalition of state and local governments, nonprofit organizations, solar developers, financing and service providers, research agencies and citizen activists to achieve an astounding goal. That is to grow community solar capacity nationwide by nearly 700% from 3 GW to 20 GW between 2021 and 2025.

As if that were not enough, the National Community Solar Partnership also plans to meet the Biden Administration’s Justice40 goal, assuring that 40% of overall benefits from related DOE investments will go to disadvantaged communities. This puts a focus on attracting more low-to-moderate-income customers for community solar, as well as supporting minority-owned solar businesses and working directly with stakeholders at the grassroots.

With bright ginger hair and an easy smile, Steele looks like she might have missed the sobering experience of riding the industry’s infamous “solar coaster,” but in fact, she has worked on clean energy issues for two decades.

She brought the Grid Alternatives community-based solar-development model to the Mid-Atlantic region in 2014 and before that, she worked on policy for the Alliance to Save Energy and served in state and local governments.

The source of Steele’s optimism is not grounded in faith or trust in reliable incentives; the NCSP has yet to see any of the solar benefits from the administration’s stalled Build Back Better bill.

Instead, Steele is focused on coalition-building. “How can we unlock thoughtful stakeholder energy?” she asked. “I know that together we can expand existing community-solar markets and open new ones.”

Membership in the NCSP has boomed over the past year to more than 1,000 partners, representing more than 700 organizations from all 50 states.

That is a healthy growth rate, but it pales in comparison to the NCSP forecast for as much as 12 GW of new solar, driving the total size of the U.S. community solar market to 20 GW by 2025.

Steele has access to market-development research and modeling based on treating the CCSA/Wood Mackenzie analysis as more of a baseline than a ceiling and projecting greater growth in five areas, from reducing average project costs to building stronger utility support for community solar.

NCSP partners are encouraged to Zoom in and join numerous tactical efforts. Examples from a long list of choices include:

Another subset of partners is working on new financing options and a developers’ working group just formed to work on utility-interconnection bottlenecks and other industry barriers.

The NCSP relies on support from DOE staff, independent contractors, and the national labs, especially the National Renewable Energy Laboratory and the Lawrence Berkeley National Laboratory, to help infuse technical innovations and analytics into the effort. Steele said overall program costs are relatively low because the NCSP leverages many ongoing solar-development activities.

It is too soon to know whether the NCSP will reach its goals on schedule, but if CCSA/Wood Mackenzie analytics are any indication, the outlook for community solar continues to brighten. Their latest forecast, updated in early 2022, reflects faster growth over the past year than previously expected, adding an extra 9% pitch to their anticipated five-year growth curve. That is still short of NCSP’s targeted pace, but it could be a sign of good progress.

Steele said she recognizes that the program is still in a race against time. “Only three years until 2025! That’s not too long before our celebration.”

To join the NCSP and to learn about technical assistance opportunities to support state or local community-solar-market-development efforts, visit its federal website.

Note: This article was edited on 7/27/2022 to clarify Nicole Steele’s years of experience.

About the Author
As President of Cliburn and Associates, Jill Cliburn leads the Solar Value Project and is a technical advisor for the NCSP. She is an American Solar Energy Society Fellow.