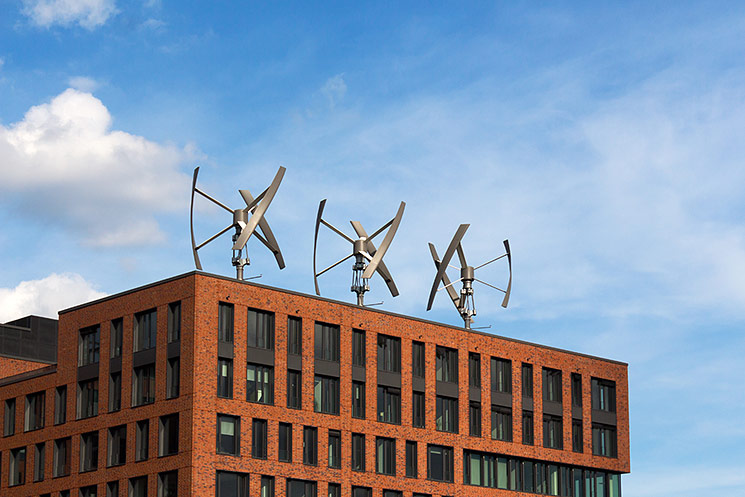 Wind turbines on the roof of a building.

Late in 2016, the National Renewable Energy Laboratory (NREL) released a long-awaited report titled Deployment of Wind Turbines in the Built Environment: Risks, Lessons, and Recommended Practices. This followed a presentation by NREL’s Ian Baring-Gould of the findings at the 2016 Small Wind Conference. While the report certainly breaks the news gently, as NREL is prone to do, it makes it perfectly clear that what are termed Built Environment Wind Turbines (BEWTs) are not a great idea…depending on the project objectives.

BEWTs include a wide array of conventional horizontal axis turbines and vertical axis turbines (VAWTs) plus hybrids of these two, building integrated turbines, and all manner of new inventions, most of which are touted by their purveyors for their ability to take advantage the low winds and turbulence found in the urban or built environment. The built environment includes cities and suburban areas, as well as pretty much anywhere that one would install a turbine that does not meet the small wind industry best practices (i.e., on a tower so that the rotor is at least 30 feet above obstacles within 500’ or above the mature tree line in the area, whichever is higher).

The report draws its conclusions from six case studies that were installed with various project-specific objectives as well as the Warwick Wind Trials in the UK.

For those of us in the small wind industry, these conclusions are not news. However, for those contemplating designing, specifying, purchasing, installing, or offering grants for BEWTs, there may be some eye-opening takeaways including:

• “None of the case study projects met their energy production estimates.” The NREL report documents performance, something which is nearly impossible to get from either urban turbine manufacturers or the owners of such installations. One installation reported a capacity factor (CF – the amount of energy generated versus potential output based on rated output of the turbine) of 7%, actually a high number for such an installation. This was for a set of four Skystream wind turbines on 45-foot towers atop a 23 story building, a highly unusual installation to say the least. At the other end of the spectrum was the more usual performance for an urban turbine: a 0.04% CF. If you were to calculate payback for such an installation, it would be in the thousands of years. Without including maintenance costs.

When added together, it’s understandable why the expenses due to engineering, permitting, and liability versus a difficult to quantify (at best) or non-existent (more likely) wind resource, simply do not make BEWTs cost effective on an energy production basis, especially when compared to installing a properly cited certified wind turbine on a tower suitable for the site.

This is an incredibly valuable report! If you want to do something positive with renewable energy in an urban or suburban built environment, put up PV instead, something that will actually generate energy in that environment. And this is coming from a wind guy!

About the author:
Mick Sagrillo (msagrillo@ wizunwired.net) has powered his family’s home with all manner of wind turbines for the past 35 years.