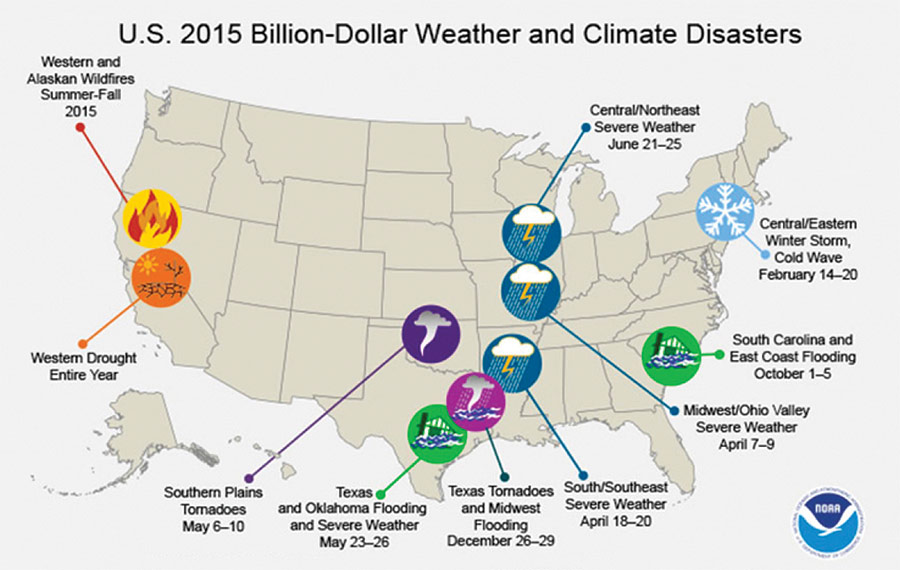 In 2015, the National Oceanic and Atmospheric Administration (NOAA) documented a record ten $1B in climate disasters including the California/western drought, floods in Houston and South Carolina and the western U.S. wildfires. © NOAA

It was 2015 and the lead-up to the pivotal Paris COP21 meeting had been marked by a global push for a bold climate agreement. The scientific community aligned around key goals to preserve a livable climate; i.e., reduce global GHG emissions 50% by 2030 and 100% by 2050. At the same time, Stanford University’s ‘The Solutions Project’ gained traction with their published papers showing the feasibility of an energy grid based on 100% renewable energy from wind, water and solar (WWS).

Here in New Mexico, the state’s renewable Portfolio Standard (RPS)requiring electric utilities to produce a percentage of their energy from renewables was in sight of topping out at 20% by 2020. Implementation stalled at half that level due to rules at the state utility commission. The impacts of the climate crisis were hitting us in the face.

In 2015, the National Oceanic and Atmospheric Administration (NOAA) documented a record ten $1B climate in disasters including the California/ western drought, floods in Houston and South Carolina and the western U.S. wildfires. Ten is no longer a record. In 2021, there were 20. That and the Keeling Curve of atmospheric CO2 levels crossing the symbolic 400ppm, made it clear that the climate crisis demanded bolder action. New Mexico’s effort to craft the successor to the 2007 Renewable Energy Portfolio Standards was launched in late 2015 with a small group cataloging the issues with the existing law. Issues included the RCT (Reasonable Cost Threshold) loophole weakening the RPS requirements by allowing big utilities to avoid compliance if their yearly spending exceeded 3% of revenues, plus large company caps, double-counting of RECs, etc. 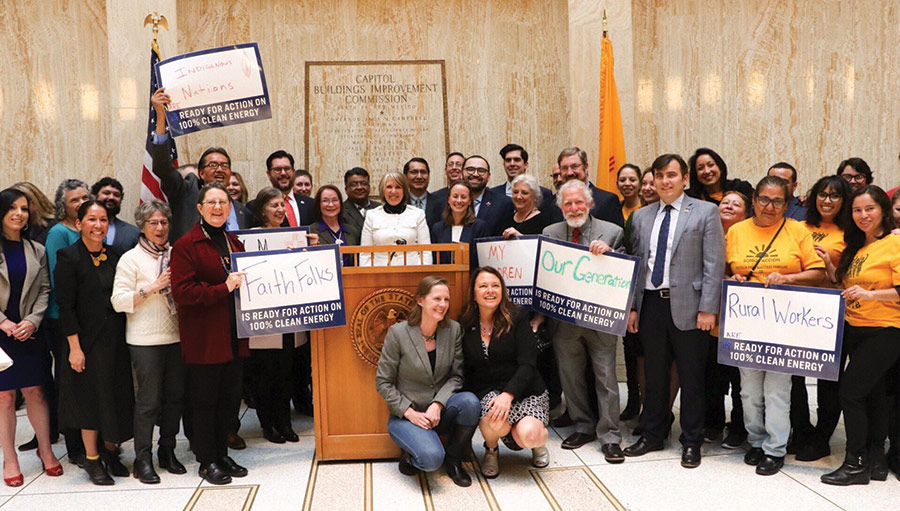 Grassroots organizing by environmental organizations including the Sierra Club, 350 New Mexico, Conservation Voters, New Mexico Interfaith Power and Light, Environment New Mexico and others, packed the hearing rooms and helped SB 312 pass its first committee, Senate Conservation, by 6-3. But in the more conservative Senate Corporations and Transportation committee, it failed by 5-3. We knew passage of this bill in 2017 was unlikely. Ultimately, SB 312 was a dress rehearsal for future legislative efforts. We discovered who our allies and opponents were, and whose votes we needed. Most importantly, this effort announced to the state that this decisive bill had broad support. We also identified key questions, such as the economic impact of closing coal and gas plants and converting to renewables. The Union of Concerned Scientists helped answer those questions in their October 2017 report, Committing to Renewables in New Mexico: 2,400 new jobs, improved health, reduced water consumption, no increase in electricity rates and a state more attractive to businesses seeking a clean energy supply.

A bill introduced in the 30-day 2018 legislative session, SB47 Energy Redevelopment Bonds sought to establish ‘securitization’ using low-cost bonds enabling utilities to refinance outstanding debt on their coal plants as failed to pass for a number of reasons, including environmental and environmental justice groups asserting that while a major benefit to utilities, it lacked any requirement to extend the RPS requirements past 20%. It also lacked adequate benefits for the communities near retiring coal plants. The lessons from this effort and the election of 2018 set the stage for passing the Energy Transaction Act (ETA) in 2019.

Energy Transition Act (ETA) New Mexico governor Michelle Lujan Grisham campaigned in 2018 on the key elements from the 2017 RPS bill, specifically an RPS of 50% by 2030 and 80% by 2040. Shortly after being sworn in, she codified that commitment in her January 2019 climate executive order:

During hearings for the bill, Governor Lujan Grisham had key cabinet secretaries testify in support. She attended hearings and championed RPS goals beyond the campaign commitment of 80%, all the way to 100% zero carbon by 2045. This made the ETA a nation-leading set of standards, matching the best out of California and Hawaii at the time. The final RPS targets for the three big utilities require renewable electricity at 40% by 2025; 50% by 2030; 80% by 2040 and to achieve 100% ‘zero carbon’ by 2045. For rural co-ops: 50% by 2030 and 80% renewables with 100% carbon free by 2050. 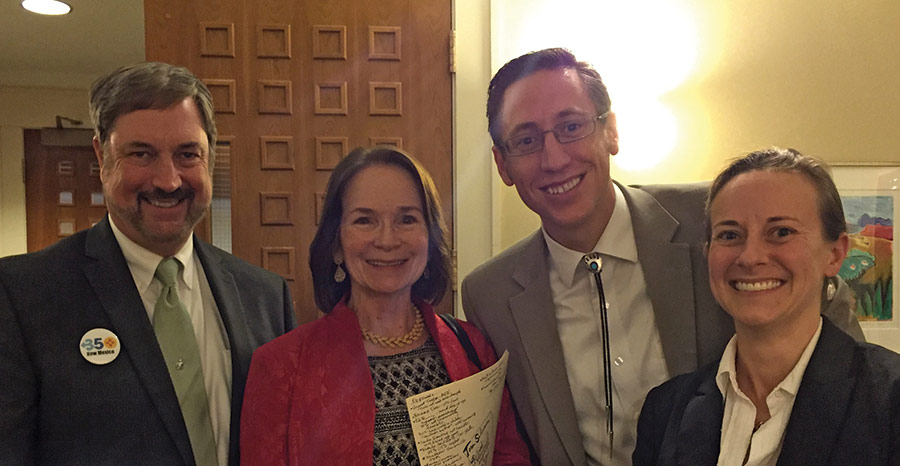 The bill provides $30M for clean-up and remediation. It also added $40M for economic development, severance and job training to help the local community and affected workers in the San Juan generating station and coal mine complete a just transition to new jobs as Public Service Company of New Mexico (PNM) closes the plant in late 2022. It also requires tribal consultation in developing a state plan and fund to assist tribal and Native Americans affected by the energy transition. And it requires apprenticeships for energy jobs in the state.

The securitization provisions in the bill, which facilitated PNM’s exit from the uneconomic San Juan coal plant and provided customer savings from that retirement, provided savings to customers from that retirement, reached legislators beyond the group of environmental advocates. Votes in the committee blocked the previous RPS-centric bill, SB 312. This turn of events caused rifts in the environmental coalition, but they were key to passing the bill. In the end, the ETA vote was strongly bipartisan, passing by 32-9 in the New Mexico Senate and 43-22 in the House. It was signed by Governor Lujan Grisham on March 22, 2019.

RPS compliance: In their annual report to the PRC, utilities reached 18.9% vs the ‘20% by 2020’ RPS requirement with most of the 1.1% shortfall from El Paso Electric.

San Juan replacement power: With PNM voluntarily retiring the San Juan coal-fired generating station in June 2022, the PRC reviewed replacement options and in 2020, despite the utility’s proposal to build gas-fired generation, approved the all-renewables, solar+battery project portfolio called CCAE-1. This showed the value of language in the ETA requiring the commission to favor energy sources with the least environmental impacts. The CCAE-1 portfolio, named for the Coalition for Clean and Affordable Energy that backed it, will include 650 MW solar and 300 MW battery storage for an approximate $1B investment in northwest New Mexico of which $447M will be in the same school district as the coal plant to help replace the local tax base. These projects are in progress.

Will costs go up as renewables replace coal power? According to PNM, the customer will save nearly $7 per month.

Two resources from Stanford professor Mark Z. Jacobson laid out the vision for a 100% renewable energy New Mexico in The Solutions Project, a national effort for a vision of a 100% renewable energy system, and in his December 2021 paper 15 that models the 2050 portfolio of 100% WWS (wind-water-solar) for all purposes for all U.S. states. The 2050 nameplate capacity for New Mexico would be 31.80 GW, composed of 72% wind, 26% solar and 1% hydro+ geothermal. That’s energy for all purposes including homes, businesses, industry, transportation, agriculture, etc., according to American Clean Power, 16 in Q4’21 New Mexico had 4.745 GW of nameplate renewable energy online, or 15% of the end-state. That’s a lot of cheap, clean energy left to build. 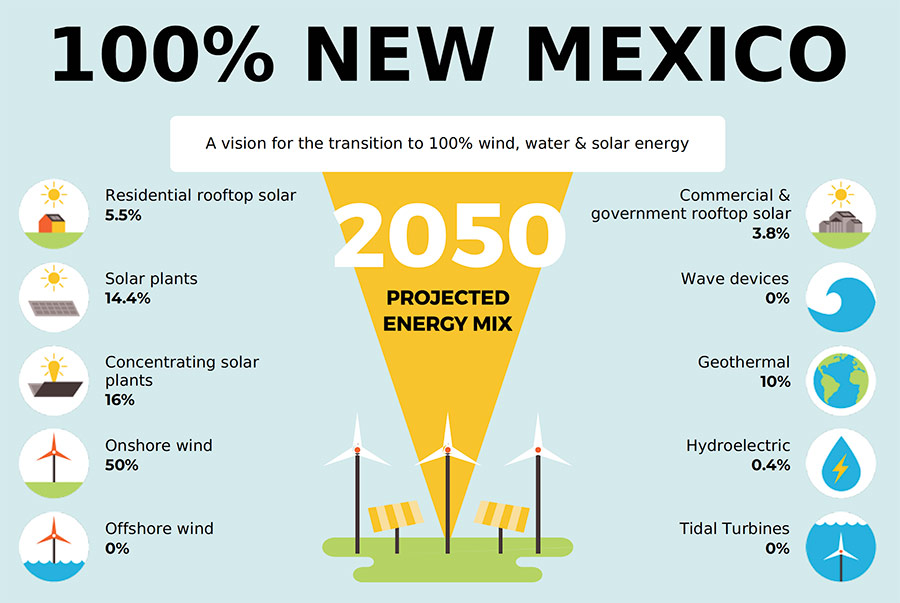 Two resources from Stanford professor Mark Z. Jacobson laid out the vision for a 100% renewable energy New Mexico. The Solutions Project, a national effort for a vision of a 100% renewable energy and his December 2021 paper that models the 2050 portfolio of 100% WWS (wind-water-solar) for all purposes for all U.S. states. The 2050 nameplate capacity for New Mexico would be 31.80 GW, composed of 72% wind, 26% solar and 1% hydro+ geothermal. That’s energy for all purposes including homes, businesses, industry, transportation, agriculture, etc. according to American Clean Power, in Q4’21 New Mexico had 4.745 GW of nameplate renewable energy online, or 15% of the end-state. That’s a lot of cheap, clean energy left to build.

Passing the ETA placed New Mexico among national leaders committed to clean electricity. Important new policies have followed the ETA, including a new 10% state solar tax credit, a community solar bill and a government/community Sustainable Economy Task Force to chart a just transition to a clean energy future. There is much left to do, but here inNew Mexico there is a strong commitment to getting it done.

About the Author
Tom Solomon, co-coordinator of 350.org New Mexico, is a retired electrical engineer. During his 34-year career at Intel, he led the team which built Intel’s Rio Rancho, NM Fab 11X in 2001, the $2B microprocessor Fab which employed4,000 people at its peak. He also led the efforts to build Intel’s 100kW solar array in 2011. After retirement, in 2013 Tom became a co-coordinator of 350NM, the NM chapter of 350.org, fighting global warming to ensure a safe climate for his three children. 350NM’s campaigns include UNM divestment, large public rallies to demand action on climate, public education forums on the need to rapidly convert from fossil fuels to renewable energy, and helping to pass climate legislation, including the 2019 Energy Transition Act, which expanded NM’s renewable electricity standard to 100% carbon free by 2045.