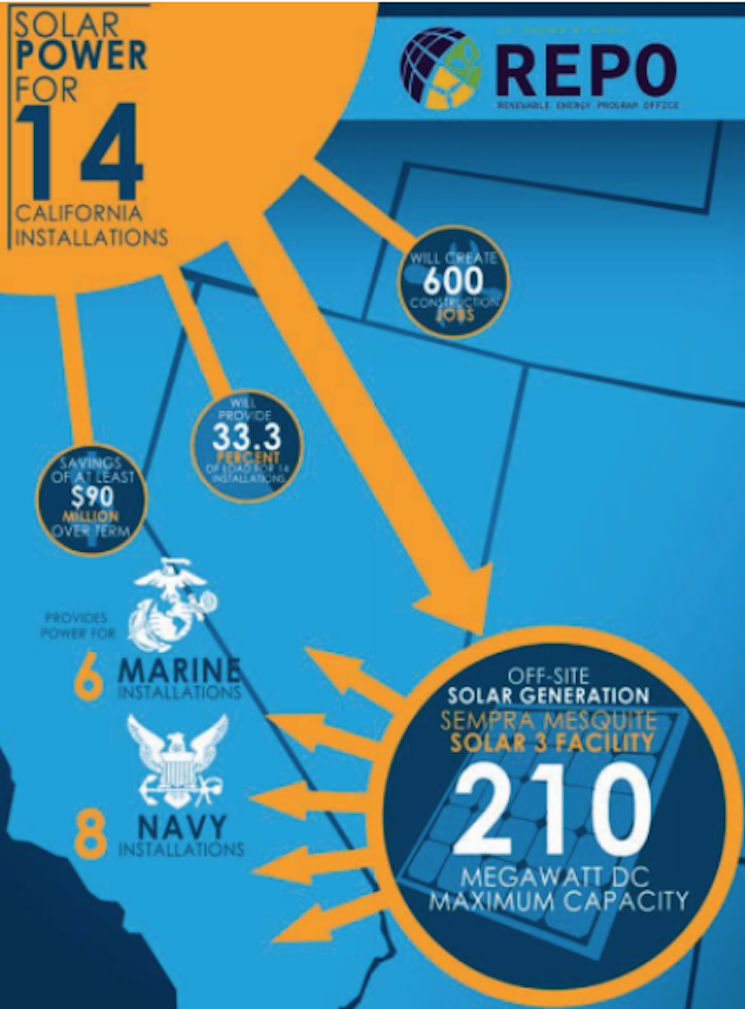 Adding solar power to Naval installations will help diversify the DON’s shore energy portfolio and provide long-term cost stability, which ultimately contributes to the DON’s energy security priorities. In May 2014, the DON and Western signed an interagency agreement that allowed Western to issue a request for proposal (RFP) and then select Sempra U.S. Gas & Power’s Mesquite Solar 3 project, a solar plant located 60 miles west of Phoenix, Arizona. More than 650,000 photovoltaic (PV) panels on ground-mounted, horizontal single-axis trackers will be installed, providing a third of the energy needed to power 14 Navy and Marine Corps installations. Construction of Mesquite Solar 3 begins this month and Sempra U.S. Gas & Power expects the project to be complete by the end of 2016.

Secretary of the Navy Ray Mabus, who hosted the ceremony with Western and Sempra U.S. Gas & Power, emphasized the importance of the agreement. “The collaboration on Mesquite Solar 3 is a triumph of innovative problem solving, and will help to increase the DON’s energy security by diversifying our power portfolio and improving energy efficiency,” said Mabus. “This agreement is also projected to save the DON at least $90 million over the life of the project.” In addition to the energy security benefits to the DON, the Mesquite Solar 3 project will help the 14 installations comply with California’s Renewable Portfolio Standard. At 210 MW, the solar facility will contribute 21 percent of the power needed to meet Secretary Mabus’ goal of bringing one gigawatt of renewable energy into procurement by the end of 2015.

“We are pleased to partner with both the DON and Western to help contribute to the DON’s renewable energy portfolio and to expand out Mesquite Solar complex,” said Patti Wagner, president and CEO of Sempra U.S. Gas & Power. “The development of Mesquite Solar 3 will continue to stimulate the local economy in the region and would not have been possible without the strong support of neighboring communities, regulators and local, state and federal officials.”

Western’s Senior Vice President and Desert Southwest Regional Manager, Ronald Moulton, also commended the project. “The powerful collaboration between all parties made this project possible. We look forward to facilitating similar agreements with other Federal agencies, helping them meet their renewable energy goals, and building more partnerships for powering the energy frontier,” he said.

In 2009, Congress mandated that the Department of Defense (DoD) produce or procure 25 percent of total DoD facility energy from renewable sources by 2025, with each service responsible for generating a portion of that renewable energy. Mabus accelerated that goal, directing the DON to procure one gigawatt (GW) of renewable energy by the end of 2015.

With the signing of Mesquite 3 (210 MW), the recent groundbreaking at Camp Lejeune, North Carolina, (17 MW) last month and upcoming groundbreaking at Kings Bay, Georgia, (42 MW), the Navy is on track to meet that goal with a total 1.2 GW of projects in the pipeline.