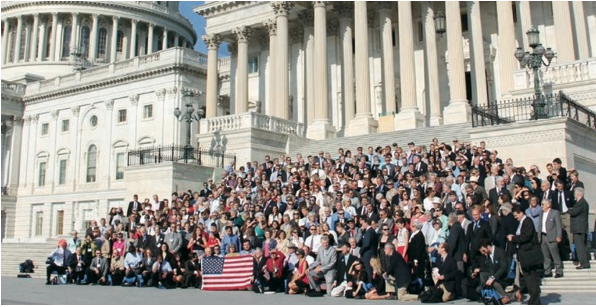 A proven policy to reduce greenhouse gases and grow the economy could gain congressional approval, and Citizens’ Climate Lobby (CCL) is working to make that happen.

Rising global temperatures and carbon dioxide (CO2) levels prompted new U.S. Environmental Protection Agency (EPA) rules, including targets for fossil-fueled power plants in the United States. The EPA targets alone may be insufficient, however, because they don’t include attainment mechanisms. The rules allow each state to develop its own regulations.

Damage costs, or external costs, should eventually be included in fossil fuel prices. Exxon Mobil is reportedly using $60 per ton of CO2 as an expected future damage cost for its internal calculations. An interagency working group in the federal government estimated in 2013 that the range of damage costs is too wide to be useful, between $12 and $221 per ton.

But like the EPA targets, the precise damage a ton of CO2 causes isn’t as important as establishing a policy that compels the right responses. Everyone responds to economics, so prices must be incorporated into that policy. To avoid distortion, they should cover not just electricity as directed in the EPA rules, but also all other sources of greenhouse gases. The good news is that a fee on carbon would be easy to collect because most fossil fuel flows through relatively few companies.

Better Than Cap and Trade

Experience demonstrates which policies are most effective, and cap and trade has not fared well. The “cap” is a limit on carbon emissions, which declines in the future. Rights to pollute according to the cap are auctioned or given to influential entities, and those rights are then traded among entities that wish to pollute or among financial institutions that wish to profit.

The “trade” aspect is a gift to financial intermediaries like investment banks and utilities rather than an incentive for renewable energy investors. Cap and trade prices historically have been low and unpredictable, and the process is complicated.

Simpler would be better, and renewable energy investors, like other investors, prefer greater certainty about potential returns. Carbon fees or carbon taxes have been more successful in reducing CO2 emissions around the world. They are easy to understand and they eliminate the opportunity to game the system that cap and trade affords.

Carbon fees have been implemented in Boulder, Colorado, in British Columbia and Quebec, and at national levels as shown in the table to the left. The range of values per ton reflects worldwide agreement that carbon fees should
be more than zero, which is the de facto value in the United States.

Equally important is where the money goes. If the fee is a tax, funds flow to the government to spend as it chooses. But there is another option.

Since enacting carbon fee and dividend (CFAD) in 2008, British Columbia’s program has turned out to be effective and politically popular. With one of the highest fees at $28 per ton of CO2, it returns revenues to its citizens in tax reductions. Fossil fuel use there has declined 17% since implementation.

Recognizing that success, CCL began working in 2010 with volunteers and members of Congress to implement a CFAD in the United States.

CCL’s proposal would assess $15 per ton in its initial year (assumed to be 2016), and raise the fee after that by $10 per ton per year. Other greenhouse gases like methane would be included.

Unlike some proposed legislation, this plan places the funds out of politicians’ control. In that regard it is similar to the popular Alaska Permanent Fund dividend.

What would happen with such a policy? Analysis by Regional Economic Models, Inc. and Synapse Energy Economics, Inc. shows that by 2025, a CFAD would:

Petroleum, coal mining, and chemicals show declines, whereas health care, finance, and insurance show gains. Families that reduce energy usage will come out ahead and those who don’t will pay more. Each $10 per ton raises the cost of gasoline about $0.09, but as time passes the overall economy will be healthier and so will we.

As a grassroots organization, CCL promotes CFAD by helping volunteers organize throughout the country. Chapters are now active in 90% of House districts. For the fourth year, CCL held its 2014 conference in Washington, DC, in June, and then organized congressional visits. Some 600 citizen-lobbyists in groups of three to six visited all 507 congressional offices.

I personally didn’t meet with any actual members, only with staff in four offices. Responses were mixed, as expected. One staffer from a coal district listened politely but said his boss probably wouldn’t support the plan, whereas a staffer from a more urban district welcomed our information and indicated probable support.

A carbon tax per se would be no more popular than any other tax, which is to say not very. What distinguishes CFAD from a tax is the return of all revenue to families.

In June 2015, CCL volunteers will again visit every congressional office. CFAD legislation will be challenging in the new Congress, but to Republican majorities it offers economic growth without government interference.

Congress may not be the only decision maker that matters. Vermont, for example, has a carbon fee proposal under consideration. Legislation at the national level would be preferable, but state legislatures could implement CFAD under the new EPA rules.

With climate news ever more discouraging, those promoting a sustainable future now have a clear policy to support and a means to implement it. For more information and to join this effort, visit citizensclimatelobby.org.

John Schaefer, Ph.D., is a life member of American Solar Energy Society, a volunteer along with thousands of others for Citizens’ Climate Lobby. He has served as a renewable energy consultant and project manager since 1985 for clients including utilities, governments, the Electric Power Research Institute, the United Nations, and project developers. He can be reached at jcschaef@igc.org.