IT’S JUST GOOD BUSINESS: Even Red States Are Dumping Coal for Solar Arizona, despite being GOP dominated, is number 3 in the US for residential solar power production. In the first quarter of 2019 alone, Arizona homeowners put in 52.83 megawatts of new solar installations. 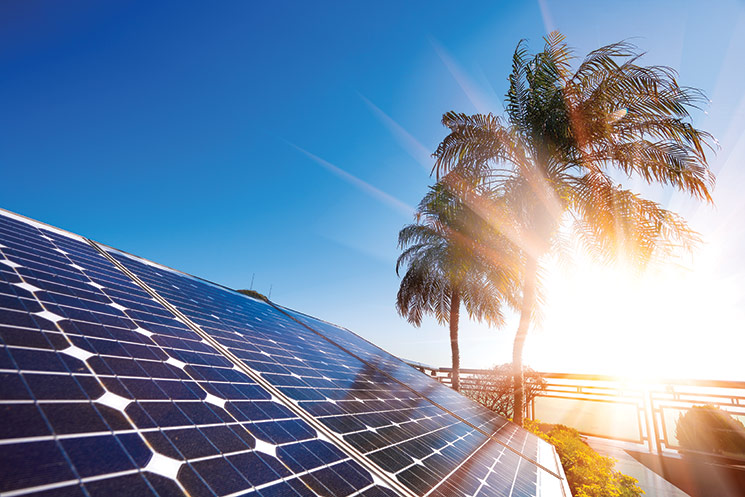 Solar Panels over time are rapidly dropping in price and increasing in efficiency.

As for industrial-scale solar, Arizona utility APS generates 1.4 gigawatts worth of solar power, equivalent to a small nuclear plant. APS’s rival TEP is planning residential solar installations in 90,000 Arizona homes. APS is also pursuing new storage capacity and wind power. Arizona now generates more electricity from solar than from hydroelectricity, though its 4 gigawatt Palo Verde nuclear plant (http://bit.ly/2M2TfMC) is one of the state’s most important sources of power.

All five members of Georgia’s Public Service Commission are Republicans, and they just decided to double their order for new solar power and to close a coal plant, according to the Atlanta Journal Constitution’s Matt Kempner. They are planning enough solar to power 200,000 homes. Georgia has 3.2 million households, so that is 6% of the state’s homes. This is only the beginning, since solar panels over time are rapidly dropping in price and increasing in efficiency. These Republican officials haven’t taken these decisions to be politically correct or because they fear the climate emergency produced by the world spewing 37 billion metric tons a year of carbon dioxide into the atmosphere. They made the decision because it makes good economic sense. And if even this GOP-dominated body in Red State is going in this direction, fossil fuels are doomed.

New Orleans has decided to add 90 megawatts of solar power, nearly doubling Louisana’s current 99 MW (http://bit.ly/36HOAYC). Although there are questions about implementation, the decision itself is remarkable in the part of the country. Louisiana is a center of petroleum production and refining and its politicians have often been hostile to renewables.

Texas has been, inexplicably, a laggard in the solar sector. It is a wind giant. But precisely for that reason, solar installations are increasing and the state has jumped to sixth in the country for solar production. That is because wind typically blows harder at night, so that putting in solar farms helps smooth out energy production and take up the slack. Trump tried to retard the growth of solar by slapping tariffs on less expensive Chinese panels, but technological advances have kept the panel prices plummeting and it is still cheaper to put in a wind farm than a new coal or gas plant. In fact, in Texas it is probably cheaper to put in a new wind farm than just to go on operating existing coal and gas plants.

So, to summarize: Republican decision makers increasingly see solar as just a good business investment that produces electricity more cost-effectively than coal. One important consideration is that the fuel is free, so that municipalities that want 25-year bids favor renewables over fossil fuels. Who knows how expensive natural gas will be in 2044? But sun and wind will still be free. And it should be underlined that the potential for increases in efficiency and decreases in price in solar panels is enormous. Coal is typically figured to produce electricity at 5 cents a kilowatt hour (it is actually more like 80 cents a kilowatt hour if you figure in the health and environmental destruction). Idaho just agreed to pay Jackpot holdings about 2.2 cents a kilowatt hour for 120 megawatts of solar-produced electricity (http://bit.ly/38Guz6B). At that price, coal is a dead man walking. Even in a red state like Idaho.

About the Author:
Juan Cole teaches Middle Eastern and South Asian history at the University of Michigan. He has appeared widely on television, radio and on op-ed pages as a commentator on Middle East affairs, and has a regular column at Salon.com. He has written, edited, or translated 14 books and has authored 60 journal articles. His weblog on the contemporary MiddleEast is Informed Comment:
www.juancole.com.