Is Bitcoin Inherently Bad for the Environment? 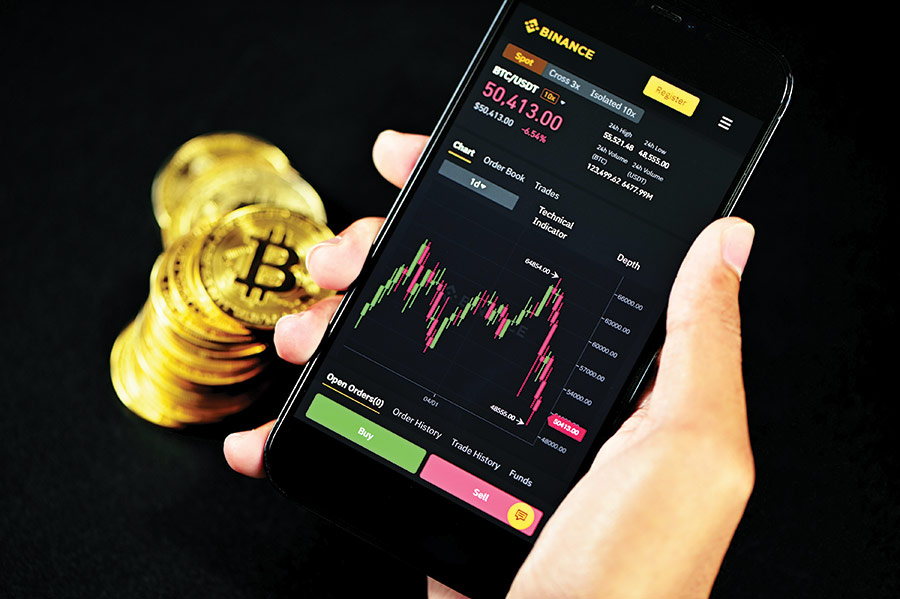 Transactions with Bitcoin use a lot of energy with the average transaction consuming more than 1,700 kWh of electricity, which is almost twice the monthly amount used by the average U.S. home. © Executium

A fierce debate around the environmental impacts of cryptocurrencies, like Bitcoin, is growing. Bitcoin, often described as a cryptocurrency, a virtual currency or a digital currency, is a type of money that is completely virtual. You can use it to buy products and services, although not many shops accept Bitcoin yet and some countries have banned it altogether.

Bitcoin does consume a lot of energy. That energy use is growing and annually consumes as much energy as whole nations, such as Finland, Malaysia, or Sweden. While Bitcoin is not the only industry to consume as much energy as entire countries; e.g., concrete consumes more energy than India, the energy both sectors consume comes with associated pollution, including carbon emissions.

Even transactions with Bitcoin use a lot of energy. The average transaction consumes more than 1,700 kWh of electricity, which is almost twice the monthly amount used by the average U.S. home. However, there are ways to transact in Bitcoin with less energy.

Exacerbating this problem, some Bitcoin mining operations have teamed up with struggling fossil fuel power plants, keeping some power plants online that would have otherwise been retired, increasing overall carbon emissions. Some utilities have even gotten into the Bitcoin game directly.

Further, in the race to deploy ever more efficient and faster machines, the average age of a Bitcoin mining machine is only about 1.3 years before it is discarded, creating a significant e-waste problem.

All else equal, Bitcoin operations that co-locate and utilize fossil fuels that would have otherwise stayed in the ground will increase emissions.

Some are considering using stranded natural gas that would otherwise have been flared, which, absent any methane venting and flaring regulations, would make the use of the natural gas for Bitcoin, at-best, carbon neutral. However, it is a stretch, and making the natural gas more valuable at the wellhead could further dissuade pipeline development that would
have moved the gas to market. 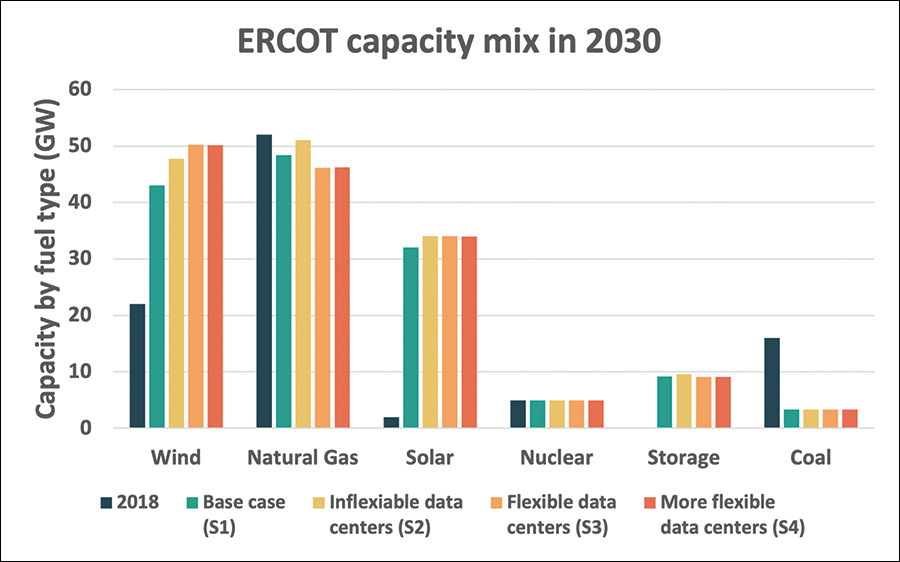 Transactions with Bitcoin use a lot of energy with the average transaction consuming more than 1,700 kWh of electricity, which is almost twice the monthly amount used by the average U.S. home. © Executium

Co-locating Bitcoin mining operations with zero-carbon resources, such as nuclear, hydro, wind and solar, could help reduce the carbon emissions associated with the mining itself. Co-location could also give a financial boost to power plants that might be able to sell their electricity at a higher price to miners instead of to the grid when demand and prices are low. This type of hybrid power plant/mine might even make uneconomical projects economical.

It is also possible that Bitcoin mines themselves could offer benefits directly to the grid, and, if operated intelligently, result in even lower overall carbon emissions.

A new report,1 commissioned by Lancium, and, full disclosure, written by the author of this article, shows how large flexible loads, like datacenters or Bitcoin mines, could be useful to the grid, if operated in an intelligent way.

The non-flexible scenario added a significant baseload to the ERCOT system. This growth resulted in the deployment of more power plant capacity than the base case, including more wind, natural gas and solar. This increased energy use also resulted in an additional 7.9 million metric tons of carbon emissions over the base case by 2030.

For additional load to result in lower total carbon emissions, the additional energy consumption must be offset by more zero-carbon energy. In the flexible datacenter/mine cases, the amount of energy generated from wind and solar was more than in the base case and the amount generated from natural gas was lower.

In general, the flexibility of the datacenters/mines moves their load to more value energy over power, which better aligns with renewables. This is because renewables are great at providing large amounts of energy, but have less ability to always provide capacity, or constant power. 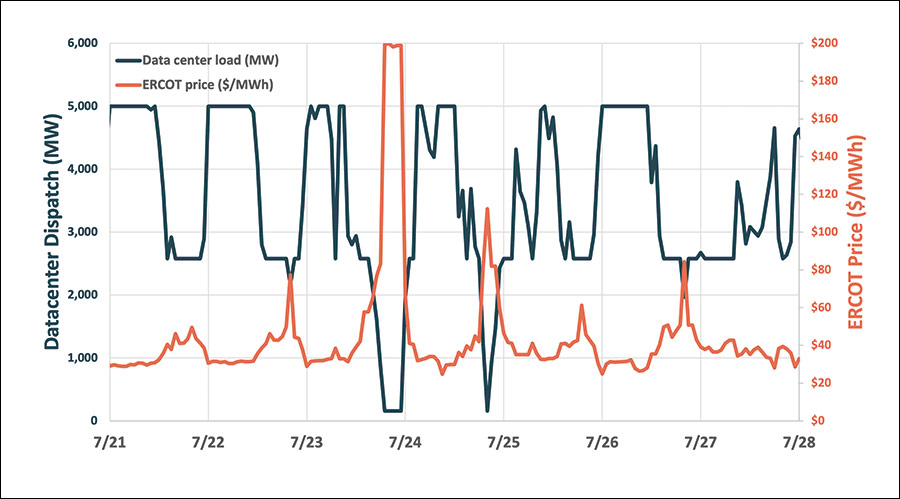 In concept, flexible datacenters/mines are similar to the electrification of transportation or heating with the ability to control the times when chargers and heaters operate. However, it is likely that datacenters/mines could offer large levels of flexible load concentrated in a smaller number of locations, which could make their administration easier.

Grid decarbonization studies often assume high levels of flexible demand, and often much of this flexibility comes from diffuse sources, such as smart thermostats and EV charging. While this analysis did not seek to satisfy any carbon policy, it does illustrate the potential carbon benefits of high levels of flexible demand coupled with an electricity market that is able to incorporate it. 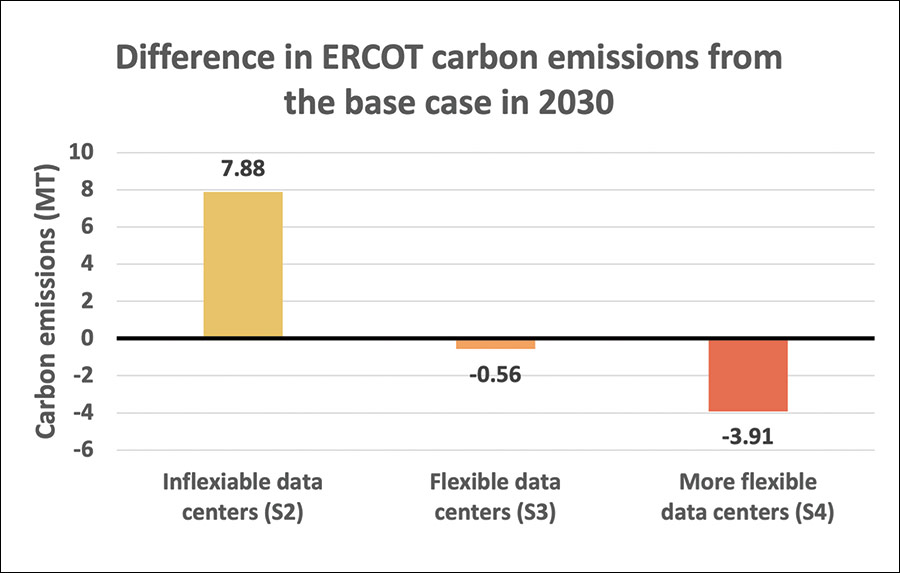 Mining and transacting cryptocurrencies, such as Bitcoin, do present energy and emissions challenges, but new research shows that there are possible pathways to mitigate some of these issues if cryptocurrency miners are willing to operate in a way to complement the deployment of more low-carbon energy.

The author of this post does not currently own or mine any cryptocurrencies.

About the Author
Joshua D. Rhodes, Ph.D. is a Research Fellow at the Webber Energy Group at the University of Texas at Austin and a Founding Partner of IdeaSmiths LLC. His current research is in the area of smart grid and the bulk electricity system, including spatial system-level applications and impacts of energy efficiency, resource planning, distributed generation, and storage. He is also interested in policy and the impacts that good policy can have on the efficiency of the economy.