Going Solar in the Sunshine State 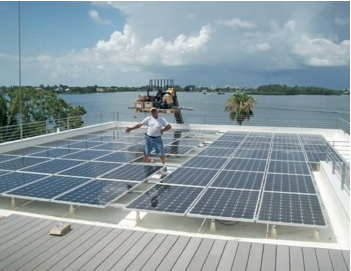 Florida’s net metering program, which supports 43 megawatts of distributed generation solar like this 15-kilowatt residential photovoltaic system in Sarasota, will soon become the next in a series of state battle.grounds to roll back net metering policies across the country. Photo credit: Harrimans Inc.

Florida—the Sunshine State if our license plates are to be believed—ranks third in the United States in solar potential but 13th in total installed solar. With 59,000 megawatts (MW) of generation capacity, about 230 MW come from solar. The bulk of that capacity comes from utility-scale projects funded by ratepayers.

The remaining solar capacity comes from the state’s net metering program, which supports 43 MW of distributed generation solar. This program will soon become the next in a series of state battlegrounds to roll back net metering policies across the country. Protecting the foundation of net metering as well as advancing current legislation and an unprecedented newly launched ballot initiative means Florida will be a place to watch for solar in 2015. Some see the fact that one-third of 1% of Florida’s electricity is from solar as a detriment, but the solar industry sees nothing but untapped potential.

The Florida Public Service Commission (PSC) and the Florida Legislature are the arenas through which net metering rules are enacted and enforced. The legislative session in Florida is 60 days long and begins on March 3, 2015. The PSC meets periodically year-round, and in 2014, on the day before Thanksgiving, the PSC held proceedings that eliminated the solar rebate program and slashed energy efficiency goals for investor- owned utilities by more than 90%.

During the proceeding, PSC Chairman Art Graham suggested that “The Sunshine State” was nothing more than a license plate slogan and took issue with nationally recognized facts about Florida’s solar potential. Commissioner Eduardo Balbis argued that solar homeowners were not paying their fair share to maintain the grid. Commissioner Balbis left the PSC in January 2015 and has been replaced by State Representative Jimmy Patronis, the current chairman of the American Legislative Exchange Council (ALEC) in Florida.

At the conclusion of this PSC hearing, the commissioners scheduled an undocketed workshop to discuss supply-side and demand-side solar. The stated objective for the workshop is to find a way to meet consumer demand for solar in a way that is fair and beneficial to all ratepayers. The solar industry, of course, will be working to make sure that the conversation isn’t dominated by supply-side (utility scale) solar and that demand-side (distributed generation), which includes solar photovoltaic (PV) and solar thermal technologies, will have a significant role in meeting consumer demand. The industry will also be working through the PSC as well as the Florida Legislature to ensure that no adverse rules are created to impede current net metering polices.

The two largest statewide solar groups, the Florida Solar Energy Industries Association (FlaSEIA) and the Florida Alliance for Renewable Energy (FARE), have combined forces and joined with regional group Southern Alliance for Clean Energy (SACE) to defend against potential threats to current net metering policies. According to Reed Wilson, president of FlaSEIA, “With FARE, FlaSEIA, and SACE working together, we can remove one major obstacle within our legislative process, which is the solar industry putting forth a mixed message.”

The cooperation among these major groups has been very encouraging. Out-of-state groups such as Vote Solar and The Alliance for Solar Choice have also been invited to participate in this collaboration and it is expected that the effort will result in real change for solar advocacy within the legislature and in protecting net metering policies.

This expectation became reality on December 5, 2014, at a conference called Re-Energize Florida. The conference, sponsored by FlaSEIA and presented in partnership with FARE, SACE, The Florida Renewable Energy Association, the Florida Green Building Council, and a student group called IDEAS, drew more than 175 participants from the solar energy industry. Attendees left with practical knowledge about how solar benefits the entire electricity grid—not just the solar system owner—as well as a plan of action to defend and advance solar in Florida.

In addition to his role with FlaSEIA, Wilson is also president of a Fort Myers-based solar and energy efficiency company called FL Green Team. In reference to current policies, Wilson says, “Net metering is the cornerstone for all solar that is built in Florida. Any negative impact to net metering is a negative impact to the entire foundation of solar development. We simply cannot and will not allow this to happen.”

Wilson says his clients, which include energy efficiency and solar thermal and PV customers, are normal citizens and normal Floridians who choose to produce their own power instead of relying on the utilities to produce it for them.

“These aren’t the wealthy elite,” he notes. “They are average Floridians who just want more control over their energy.”

Scott McIntyre, president of FARE and CEO of commercial solar company Solar Energy Management, adds that “Businesses make decisions based on cost vs. savings and return on investment. These businesses don’t need hand.outs and they don’t need unreason.able incentives, but they do need a stable and predictable set of rules and regulations. They are happy to shift investment risk in capacity development and lighten the load for their fellow ratepayers.”

McIntyre’s company is currently installing the state’s largest commercial rooftop, at 1.5 MW, on the roof of Great Bay Distributors in St. Petersburg.

Wilson and McIntyre are not alone. Businesses and consumers all over Florida are getting involved and engaged in protecting net metering policies. Current and prospective solar owners seeking to safeguard their investment have initiated a citizen-led effort called NetMeteringFlorida.com. Across the state, Floridians are demanding solar power and energy independence as the consequences of current policies and the pressing need to make a significant change to unlock Florida’s solar market become apparent.

During the past six years, there has been no forward progress for solar in Florida, only steps backward. Under Governor Crist, the state created a guideline for a statewide renewable portfolio standard (RPS), but the plan was never implemented even though it was “on the books” of Florida’s statutes. There is also an outstanding backlog of $25 million worth of rebates owed to early adopters under a state-run rebate program from 2009.

In the past two years, the only solar-related legislation that passed involved stripping the RPS guidelines from statute and eliminating the mechanism that would have paid down the outstanding rebates. Utility-scale solar build-out legislation was introduced in 2010, 2011, and 2012, but those bills were killed after distributed generation advocates asked for a small portion of the bill to come from competitive bids. Third-party sale (power purchase agreement) bills were introduced every year but never got a hearing in the House or the Senate. The closest thing to forward progress was a commercial tax bill that would have created an exemption from additional property taxes for solar installations. This legislation cleared the Senate but was blocked by the House Appropriations Committee.

On a federal level, the threat of eliminating the federal tax credit looms large for many investors who aren’t necessarily solar zealots, but instead are only looking for the best returns on investment possible. By eliminating tax credits, investors will simply move their dollars back over to oil and gas investments, which—through tax credits and depreciation incentives—support a massive market.

This backward track record on both a federal level and within the Florida Legislature, combined with other utility-related news, makes it easy to understand why ratepayers and consumers are so frustrated. To cite just a couple of news stories, Duke Energy collected more than $3 billion through advanced nuclear cost recovery without ever actually building the nuclear facility, and an unprecedented ruling allowed Florida Power & Light Company to charge their ratepayers for fracking exploration.

In 2015, a bill has been filed that will have significant impact on the PSC, including imposing term limits, establishing commissioner districts, and requiring a waiting period after leaving the legislature before becoming a PSC commissioner. Also this year, the solar energy industry will support legislation for a commercial tax exemption, red tape limitations on solar thermal and PV installations, and third-party sales of solar.

In Florida—like most places in the United States—solar sup.porters come from across the entire political spectrum. The environmental community may have made solar fashionable, but conservatives of every stripe and caliber also support solar.

Floridians are fiercely independent, and the notion of energy freedom is widely appealing. From agricultural interests in north and central Florida to environmentalists in south Florida to ordinary citizens and businesses across the state, solar is one issue that almost everyone can agree on. As battery storage becomes more and more affordable, many Floridians would be happy to simply be off the grid altogether. Energy independence is a vein that runs deep for Floridians across the political spectrum. Much like the collaboration between the Tea Party and environmentalists in Georgia, this collection of strange bedfellows is also springing to life in Florida.

This broad support is not lost on our legislators. To say the least, Florida legislators are a breed of their own. They don’t want to hear how Yankees do solar and they sure as heck don’t want to hear how California is doing it. But Georgia, on the other hand, hits home. When Florida citizens start calling Georgia the real “Sunshine State,” our leaders start paying attention.

Florida’s decision makers know that the frustration level is very high. Many Floridians see a ballot initiative as the only way to make a significant policy change in Florida. Once again it is a conservative movement called Conservatives for Energy Freedom that has led a citizen effort in Florida to allow for free market sales of solar electricity. A newly formed political action committee, Floridians for Solar Choice, has launched a ballot petition for the 2016 election, which proposes to allow Floridians the chance to choose solar electricity from independent providers. Floridians are currently banned from purchasing electricity from anyone but their designated monopoly utility company.

A free market for solar electricity sales could unlock massive market potential in Florida by giving developers new options to offer financing to their customers. Stability in financing results in lower costs, and project developers can levelize upfront and ongoing costs for customers. Modularly designed systems can increase production to meet increased demand. And—most importantly—all ratepayers will benefit from these solar projects by saving money on capacity development. The private market is ready and willing to step up to shift investment risk away from ratepayers.

Recent polling shows that 74% of Florida voters would support a proposal to change Florida’s current law and allow Floridians to contract directly with solar companies to purchase solar power for their homes or businesses. From the furthest politically right to the furthest politically left, regardless of income or geography, Floridians see solar as a choice they have the right to make.

So stay tuned. Big things are happening in Florida and it looks like Floridians will soon choose to live up to their moniker, the Sunshine State.

Mike Antheil is executive director of the Florida Solar Energy Industries Association and the Florida Alliance for Renewable Energy. He can be reached at mike@flaseia.org.