The Federal Green Revolution and You 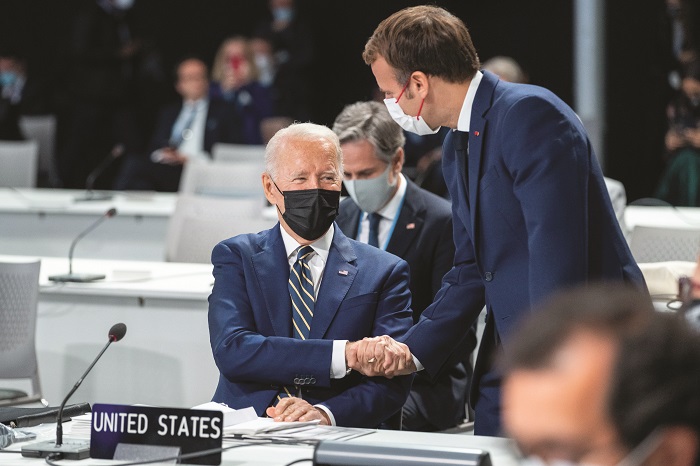 U.S. President Joe Biden said at COP26 in 2021, “There’s no substitute for face-to-face diplomacy. I’m here at COP26 to make sure that we meet the moment on climate and kick off a decade of ambition, action and innovation to preserve our shared future.” (Credit: The White House/Wikimedia Commons)

Adapting a quote from the United Kingdom Prime Minister Winston Churchill — national climate politics can be a riddle, wrapped in a mystery, inside an enigma. I was very surprised that a hyperpartisan Congress — and an administration too confident in its own abilities and plagued by world events and an overheated economy — have managed to pass a series of historic climate-responsive policies and programs.

Much of the credit for the bipartisan Infrastructure Investment and Jobs Act,1 the Inflation Reduction Act,2 and the CHIPS and Science Act3 goes to one of the more puzzling political personalities on Capitol Hill — Sen. Joe Manchin (D-WV). Yes, the same coal-state senator largely responsible for tossing President Joe Biden’s Build Back Better Act in the congressional dustbin.

Through the first half of this year, it looked as if the IIJA and a series of presidential orders to federal agencies would constitute the entirety of the federal response to the climate crisis. It’s not that these things are unimportant — quite the contrary. However, they’re hardly what’s needed to respond in a just, timely, consistent manner to the climate crisis and its consequences.

Moreover, executive orders can be as easily erased by the next president as they were issued by the current one. President Donald Trump promised to reverse all of President Barack Obama’s climate-related directives, including his signature Clean Power Plan, early in his administration. Biden promised that on Day 1 in office,4 he would reverse most of Trump’s climate-related orders. They were promises both men were easily able to keep.

Of the $550 billion in new spending, the IIJA provides tens of billions of dollars for environmental and climate-related investments, including:

The bill provides states with funds for everything from the development of training programs for contractors who install home energy-related retrofits and resources for writing the rules for building codes to rebate programs that encourage building energy efficiency into environmental and climate justice block grants.

Democratic Party leaders initially thought that the infrastructure bill and Biden’s Build Back Better Act would be joined as part of a budget-reconciliation process that wouldn’t require any Republican support. The reconciliation process is not subject to the Senate filibuster rule that takes a supermajority of 60 votes to close the debate down so that the subject legislation can proceed to a vote.

A filibuster is a very long debate that blocks or delays consideration of a piece of legislation. It takes advantage of a Senate rule that says a senator can address the body for as long as they wish.

Although the reconciliation process would have avoided the need for any Republican votes, it demanded that all 48 Senate Democrats and the two independents who caucus with them vote as one. With the Senate split 50/50, the Democrats’ majority status is contingent on tie votes, allowing Vice President Kamala Harris to cast the tie-breaking vote.

Infrastructure was something that Republicans and Democrats could agree on. It was a standing joke in the capital that every week of the Trump administration was infrastructure week — with never any action.

The BBBA was another matter. The politics around it meant it would never pass as a multi-trillion-dollar standalone piece of legislation. Manchin said he believed the President’s plan was inflationary and refused to provide the 50th vote.

The White House and a core group of ten bipartisan senators that included Mark Warner (D-VA), Susan Collins (R-ME), Manchin, Rob Portman (R-OH) and Jon Tester (D-MT) thought it was essential to the nation to show that members of Congress were capable of putting aside partisanship long enough to get something done.

Progressive Democrats in the House of Representatives said they believed that splitting the infrastructure bill and the BBBA meant “the ambitious social safety net and climate package”5 was doomed.

At the time, the HuffPost said, “Progressives want some kind of commitment that, if Congress passes the narrower bipartisan deal, it will also pass a broader package that includes progressive priorities like child care, elder care, affordable housing, and investments aimed at boosting electric vehicles.”

The concern that the BBBA was doomed was spot on, but no Democrat was in a position to vote against the IIJA, so the bill passed.

When the BBBA went down, it took most of Biden’s climate plans with it. However, the thinking was that Manchin would support clean energy tax credits as he had in the past.

Those thoughts appeared to be wrong over the eight months between the passage of the IIJA and the announcement that Senate Majority Leader Chuck Schumer (D-NY) and Manchin came to an understanding on the oddly named IRA.

Manchin expected something in return from Schumer and House Speaker Nancy Pelosi (D-CA) for his support of the IRA. He wanted a guarantee6 that language speeding up the permitting process for fossil fuel projects, including pipelines, would be inserted in a must-pass budget bill.

The language was inserted as promised. However, it was payback time for the progressives. The Manchin provisions were stripped out of the continuing resolution keeping the government open. The significance of this contentious history will become apparent in a moment.

The IRA is U.S. history’s most comprehensive climate-related legislation. The bill rises to the challenge of climate change by encouraging the adoption of clean energy alternatives through positive reinforcement of climate-wise choices such as tax credits, investment incentives and consumer rebates.

The IRA is remarkable for its breadth. It addresses issues of parity for programs and policies thought long ignored — environmental justice for communities of color and measures for low-income and rural populations.

The act provides $47 to $60 billion for environmental justice initiatives.7 According to PPI,8 a progressive Washington, DC think tank, “Rural energy systems will receive significant upgrades, with $10 billion appropriated for rural electric cooperatives and $2 billion for clean energy adoption through the Rural Energy for America Program. Conservation, agriculture and forests receive $20 billion all together, as well.”

The legislation reduces federal deficit spending through corporate tax hikes. It allows the bill to lay claim to what its title suggests — inflation reduction. The bill goes about it by sparing the government the cost of the programs. The CHIPS and Science Act is the third piece of the climate-related investment portfolio enacted by the 117th Congress and signed into law by Biden. RMI estimated that $54 billion of the total $280 billion authorized by the act will go toward energy innovation.9

The bill looks to free the nation from dependence on China for the semiconductor chips needed by clean energy technologies like solar and wind, the auto industry for electric vehicles, and the defense industry. However, the CHIPS and Science Act is an authorizing bill while the IIJA and IRA are appropriating bills.

The distinction between authorizing and appropriating legislation is vital for advocates to understand. The monies needed to implement the IIJA and IRA are already being accounted for in the various federal agency budgets. If the funds aren’t already in program accounts, the checks are in the mail.

The same cannot be said for the CHIPS and Science Act. An authorizing bill gives permission to spend federal funds for specific policies and programs. However, the bill doesn’t provide the capital — that comes through an appropriations act.

Congress will return to Washington, DC after the elections, as it will once again be forced to pass more budget legislation, either as a series of individual bills or as part of one large budget package.

Funding for the CHIPS and Science Act may be part of the next budget action. Given the spate of supply chain problems plaguing anything requiring a computer chip, the bill has bipartisan appeal.

There’s no question that the triptych of the nation’s new climate legislation is good for its economy and environment. Assuming that everything goes according to the rules in the implementation phase of the IRA alone, it would mean a 40% reduction in greenhouse gas levels from 2005.10,11,12

What’s the likelihood that the rules will rule? When’s the last time any government program was put into practice without a hitch?

What Can You Do?

It’s at the implementation phase that the climate and clean energy communities need to double and triple efforts to engage government policymakers in a dialogue about how the programs will be implemented and even to partner in proposals for projects that could receive funding. From experience, I can say it’s not a task for the faint of heart.

The bills are complicated. There are a lot of moving pieces to understand and dots to connect. As legislation goes, the IRA was brevity itself at 725 pages. That is not true of the infrastructure bill, which has 2,700 pages. The CHIPS and Science Act weighs in at 1,000 pages.

Fortunately, there are myriad resources available to advocates, starting with the White House. State energy offices, the National Caucus of Environmental Legislators, the National Governors Association, the National Conference of State Legislatures, the United States Conference of Mayors, environmental groups and industry associations, university departments, and community organizations like the National Association for the Advancement of Colored People are all actively engaged in the implementation of the IRA, the IIJA, and the CHIPS and Science Act.

Be warned — partisanship remains a problem and is likely to dog implementation efforts. Following the passage of the infrastructure bill, Insider reported that Trump called Sen. Mitch McConnell (R-KY) an Old Crow.13 He also used the “Republicans In Name Only” label for the 13 Republican senators who voted in favor of the bill.

Climate change is part of the culture wars. In January, 16 Republican governors accused the U.S. Department of Transportation of overreach14 due to its encouraging states to fix old roads before building new ones and emphasizing community resilience to the consequences of climate change.

A future Republican Congress and White House would be likely to review the IRA and IIJA legislation with a possible eye toward reducing their scope or reprogramming funds for other purposes.

The politicization of climate, if it’s not the greatest existential threat to the nation, is close to it. However, unlike climate change, something can be done about it quickly.

The passage of these bills is a watershed moment in the half-century of torturous efforts that have come to characterize the nation’s transition to a low-carbon economy. None of these bills are perfect, but they are extraordinary for their breadth and the resources they make available at the state and local levels.

In the final analysis, the single best way to protect these programs is by implementing them — in a sensible, bipartisan manner. Much of the legislation’s impact will be at the state and local levels.

As projects are constructed and new factories manufacturing 21st-Century technologies start production, new jobs will spring up. Then the truth of the claim that a sustainable climate is good for both the environment and the economy will be evident. If ever there was time for advocates to become engaged in a bipartisan manner, it’s now.

Joel Stronberg, MA, JD is the president of The JBS Group/Civil Notion. He’s been analyzing and advocating federal and state policies on behalf of clients for over 40 years. These days, his portfolio of activities also includes being a columnist at illuminem.com, a featured voice at Resilience.org and Energy Central, and a speaker at meetings and on podcasts.

Become an ASES member, unlock exclusive web content, and have a quarterly print issue of Solar Today mailed to you.