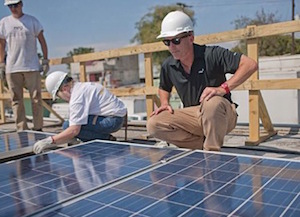 Washington DC, April 15 – In a new 32-page study released today, the SUN DAY Campaign challenges assertions by the U.S. Energy Information Administration (EIA) that renewable energy sources will provide only 16% of the nation’s net electrical generation by the year 2040. Using EIA’s own previously published data, the analysis shows that it’s more likely the 16% level could be reached within five years.

However, EIA’s own published data for the 11-year period January 1, 2003 through December 31, 2013 reveal that the percentage of the nation’s net electrical generation represented by renewable energy has expanded from less than 9% in 2004 to nearly 13% in 2013 – i.e., within a decade. Given the relatively consistent growth trends of the past decade or longer for most renewable energy sources and their rapidly declining costs, it seems improbable that it will require another 27 years to grow from 13% to 16%. Thus, EIA’s forecast is not just unduly conservative; almost certainly, it is simply wrong.

“Inasmuch as policy makers in both the public and private sectors – as well as the media and others – rely heavily upon EIA data when making legislative, regulatory, investment, and other decisions, underestimation can have multiple adverse impacts on the renewable energy industry and, more broadly, on the nation’s environmental and energy future,” noted Ken Bossong, Executive Director of the SUN DAY Campaign. “Consequently, EIA is doing a serious disservice to the public by publishing analyses that are inherently inconsistent with its own historical data and near-term projections.”

The full 32-page report (attached) includes the assumptions and projections made, on a technology-by-technology basis, using EIA data. In addition, following the projections provided for each technology is a listing of recent studies and news reports that offer alternative or complementary scenarios – many of which are more aggressive than those provided by the SUN DAY Campaign. These additional studies suggest that even SUN DAY’s analysis may prove to be unduly conservative.