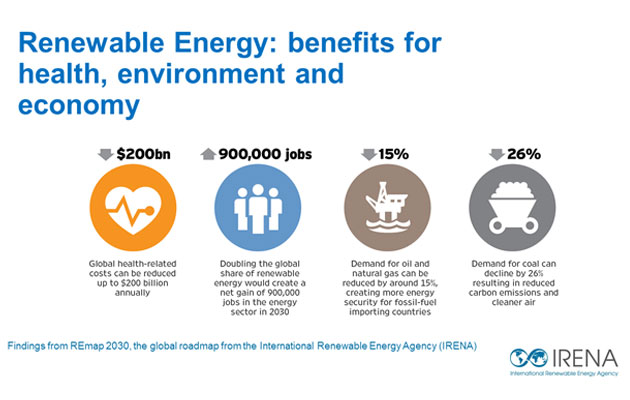 The world faces an important energy choice, according to a new reportlaunched by the International Renewable Energy Agency in New York today. “REmap 2030” says that scaling-up renewable energy to 36% of the world’s total final energy consumption by 2030 is possible, affordable and will keep the world on a trajectory consistent with a CO2 level of 450 ppm, the widely accepted threshold to limit global temperature increase to two degrees Celsius above pre-industrial levels by 2100.

The report demonstrates that the investment cost for this global expansion of renewable energy is offset by savings of up to $740 billion per year on costs associated with pollution from fossil fuels.

“The central policy question is this: What energy sources do we want to invest in? Our data shows that renewable energy can help avert catastrophic climate change and save the world money, if all costs are considered,” said Adnan Z. Amin, Director-General of IRENA, in New York. “In answering this question, ‘REmap 2030’ makes a clear case for renewables. It shows the transition is affordable based on existing technologies, and that the benefits go well beyond the positive climate impact. Countries today face a clear choice for a sustainable energy future.”

Doubling renewable energy to 36% of global energy consumption will reduce the global demand for oil and gas by approximately 15% and for coal by 26%, cutting energy-related pollution and adverse health effects as well as increasing energy security for countries dependent on energy imports. It would also create a net gain of nearly one million jobs by 2030.

“We can double the renewable energy share in the global energy mix, but we are not on that path now. To realize the world’s renewable energy potential, all governments need to step up their efforts. We need to act now,” Dolf Gielen, Director of IRENA’s Innovation and Technology Centre, added. “IRENA recommends focusing on five key areas: planning realistic but ambitious transition pathways; creating enabling business environments; managing knowledge of technology options and their deployment; ensuring smooth integration of renewables into the existing infrastructure; and unleashing innovation.”

“REmap 2030” builds on the analysis of the energy requirements in 26 countries that account for 75% of global total final e
nergy consumption. IRENA collaborated with countries and research institutions in the development of the report, which derives its objective from the United Nations Secretary General’s Sustainable Energy for All (SE4ALL) initiative. The report was launched today at the SE4ALL Forum at the United Nations Headquarters.

To download the full report, factsheets and other materials visit  www.irena.org/REmap

About the International Renewable Energy Agency

The International Renewable Energy Agency is mandated as the global hub for renewable energy cooperation and information exchange by 131 Members (130 States and the European Union). About 40 additional countries are in the accession process and actively engaged. IRENA supports countries in their transition to a sustainable energy future, and serves as the principal platform for international cooperation, a centre of excellence, and a repository of policy, technology, resource and financial knowledge on renewable energy.  The Agency promotes the widespread adoption and sustainable use of all forms of renewable energy, including bioenergy, geothermal, hydropower, ocean, solar and wind energy in the pursuit of sustainable development, energy access, energy security and low-carbon economic growth and prosperity.