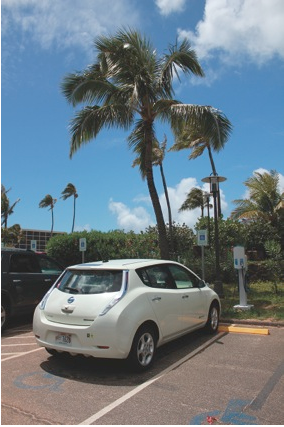 Hawai’i has the highest retail electric prices in the United States, which have driven the state and its residents and businesses to make significant investments in clean energy resources, especially distributed solar. Gasoline is also very expensive, which makes electric vehicles like this Nissan LEAF attractive to residents. Image: Ken Kelly / NREL pix 24514

Recent headlines about the electric industry run the gamut. Some extol the promise of new technologies to address environmental challenges and improve the quality of electric service. Others deliver dire predictions about the difficulty of integrating these new technologies into traditional electric utility grids.

The reality is that it is up to the players—regulators, policymakers, utilities, customers, and the clean energy community—to decide how the story turns out. If the electric industry moves now to realize the promise of these new technologies, the dire predictions need never materialize. Regulators can sidestep the challenges of integrating 21st century technologies into a 20th century grid—as well as capture significant benefits—if they choose to proactively develop regulatory policies for a 21st century grid.

The renewable energy market has taken off much faster than most would have predicted and—in some cases—has left states scrambling to respond to customer demands and utility concerns. At the same time, many states have been able to keep their markets moving with continued attention to policy innovations. Inherent in this process is a learning curve, but it is a learning curve that does not have to be faced alone.

Although there are significant advantages to generating electricity closer to the load it serves, the electric system was not designed to accommodate large amounts of local generation (now made possible by a wide range of distributed energy resources [DERs] and technologies). The implications of two-way power flow, in particular, need to be taken into account in order to maintain power quality and reliability. At low penetrations, integration of DERs can likely be managed with existing technologies and techniques. However, as penetration levels grow, more significant regulatory changes and modifications may be necessary.

As the number and capacity of DERs grow, distributed energy storage systems could add value across the full span of the electric system and benefit both customers and utilities. The advantages of adding energy storage include:

Some states are already experiencing the benefits and the challenges of high renewables penetration and have begun to look into the potential for distributed energy storage and other DERs. Although the number of markets already at this tipping point is relatively small, it is likely that a significant number of states will achieve high levels of distributed renewable energy penetration within the next 10 years. The states that take pro.active steps to establish appropriate regulatory, market, and technical foundations for DERs are less likely to experience delays or market slowdowns as a result of integration challenges.

Accurately tracking and properly valuing the benefits of distributed storage will impact the short-term and long-term deployment of this promising technology. Moreover, how we track and value storage services will have a significant impact on whether storage technologies will be deployed in locations that maximize those benefits for all potential beneficiaries. Because the market for distributed energy storage is still in its infancy, however, there is a significant need for regulatory guidance and proactive policies to ensure a smooth rollout of this technology.

State policymakers and regulators are using a variety of approaches to begin aligning policies and opening markets to enable energy storage to play a significant role in the electricity system. Some states have just started the process, while others with higher penetrations of distributed generation and increased customer demand for storage paired with distributed generation are clarifying and amending interconnection and net metering regulations to address energy storage. Still others have begun to move beyond just exploration of energy storage and have elected to provide direct stimulus to help facilitate the growth of the market.

To date, California is the only state to require regulated utilities to procure energy storage, but many other states, such as New Jersey, Massachusetts, and Hawai’i, have also begun to consider a variety of regulatory changes to facilitate the use of energy storage. Getting energy storage valuation right will ensure a healthy market.

In the last 10 years, the percentage of electricity generated in the United States from renewable sources has grown at an impressive rate, including significant amounts of generation located on the distribution system. Solar PV electricity systems in particular have evolved rapidly from a once-niche technology to one that is now widely used by schools, households, businesses, and utilities across the country.

Storage presents an exciting opportunity for regulators to build collaborative programs that meet multiple goals simultaneously. Keeping communication open among stakeholders about potential regulatory and market approaches to facilitate the deployment of this promising technology will help ensure that the benefits of energy storage are shared by all involved.

As states take action, the Interstate Renewable Energy Council will continue to keep regulators and other stakeholders informed about lessons learned by other states and will help identify best practices as they emerge to ease the learning curve for all concerned.

Sky Stanfield represents the Interstate Renewable Energy Council in regulatory matters through Keyes, Fox & Wiedman, and Amanda Vanega is a policy research manager at EQ Research. This article is an edited excerpt of a larger report, which is available as a free download at: