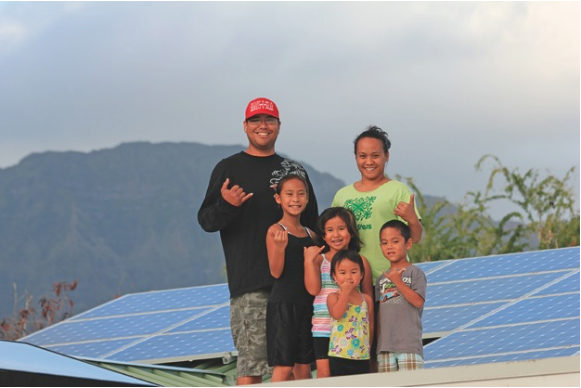 Like many Hawai’ians, Cyrus and Keala Young have rooftop photovoltaics (PV) on their home. They’re pictured here with their three daughters and their godson at Kaupuni Village in Waianae Valley, Oahu, a net zero affordable housing development that uses modern technologies to support traditional Hawai‘ian values of sustainability and environmental stewardship.

Customers of the three Hawai’ian Electric Companies (HECO)— Hawai’ian Electric, Maui Electric, and Hawai’i Electric Light—have a high percentage of photovoltaic (PV) systems on their roofs. For example, nearly 11% of Hawai’ian Electric customers have rooftop solar PV compared to a U.S. national average of just 0.5% according to the Solar Electric Power Association. It’s clear that homeowners on the Islands want to tap into their region’s abundant solar resource to generate electricity.

But as noted in recent regulatory filings, HECO has been concerned that an increased percentage of distributed, solar-generated power on its grid could lead to grid instability and potentially damaging conditions for customer loads. To better assess the validity of this concern, SolarCity Corporation is partnering with the U.S. Department of Energy’s National Renewable Energy Laboratory (NREL) to address the operational issues associated with large amounts of distributed solar energy on electric grids. The work includes collaboration with HECO.

“We know how important the option of solar is for our customers. Solving these issues requires that everyone—utilities, the solar industry, and other leading technical experts like NREL—work together. That’s what this work is all about,” said Colton Ching, Hawai’ian Electric vice president for energy delivery in a joint SolarCity/HECO news release. “With the highest amount of solar in the nation, our utilities are facing potential reliability and safety issues before anywhere else.”

The utility, according to a November 2014 HECO news release, has been working to clear a backlog of thousands of customers requesting net energy metering interconnections. These agreements are required so that homeowners can have their rooftop PV systems tied into HECO’s local distribution circuits.

The backlog, in part, led the Hawai’i Public Utilities Commission (PUC) to order HECO to “aggressively pursue energy cost reductions, proactively respond to emerging renewable energy integration challenges, improve the interconnection process for customer-sited solar photovoltaic systems, and embrace customer demand response programs.” HECO’s response, spelled out in its Power Supply Improvement Plan, included the goal that 67% of its electricity generation be from renewable sources by 2030—with more than a quarter of that attributed to customer-sited, grid-connected solar.

But again, the proverbial 800-pound gorilla in the room remains—how can HECO better grasp the impact of increasing the penetration of distributed rooftop PV generation on its power grid and decide whether or not to approve interconnection applications on circuits already hosting a high number of solar systems?

Solar power providers—whether in Hawai’i or elsewhere in the United States and beyond—would like utility grid operators to view distributed solar on their grids as an asset, not a liability. Together, the partners in this research project are using NREL’s Energy Systems Integration Facility (ESIF) to explore the ramifications of higher penetration of solar power on the grid.

The ESIF is the perfect venue for conducting critical studies of operational grid issues within the safe confines of a laboratory setting rather than jeopardizing the integrity of an actual grid. Located at NREL in Golden, Colorado, the ESIF comprises a wide range of capabilities and laboratories focused on energy integration research. In particular, its megawatt-scale power hardware-in-the-loop testing allows engineers to analyze the behavior of distributed electricity generation and distribution devices while connected to a testing system that dynamically emulates the characteristics of a power system.

Utility operators have a specific technical concern about increased solar integration—namely, the impact of transient overvoltage from PV inverters (see “Smart Inverters” below). To illustrate a typical scenario—so-called load-rejection overvoltage—consider a utility distribution circuit with a high penetration of solar PV interconnected to it. Then imagine that a storm causes a falling tree to snap a power line. This break causes a short circuit to occur, triggering a substation circuit breaker to trip, which cuts the grid’s connection with the still-energized solar systems. During the brief period before inverter controls detect the disconnection of the grid and stop the inverter current, the electrical current from the solar systems is temporarily fed into the local loads.

A standard inverter converts direct current (DC) power—what PV systems generate—into alternating current (AC) power, which is what the utility grid requires. But as more PV systems are interconnected to the grid, sophisticated inverters will need to perform additional duties. So-called “smart inverters” will include some of the following functions:

Incorporating smart inverters that can perform these and other functions within the utility grid will enable improved reliability and safety even with much higher penetration of interconnected PV systems.

But what happens if the solar-generated power is higher than the local power needs? The excess power does not have a place to flow and will make the voltage in the circuit spike rapidly to very high levels. This situation could cause damage to utility equipment and customer loads such as home appliances and electronics.

The ESIF capabilities have allowed engineers to simulate overvoltage conditions in such a scenario and test a myriad of grid configurations at different solar penetrations and using different inverter technologies. NREL’s rigorous testing determined the duration and magnitude of the transient overvoltages created by five commercial PV inverters during load- rejection conditions. Inverter types included single-phase and three-phase string inverters as well as microinverters, and the load-rejection conditions included 11 different inverter-power-to-load-power ratios—a range of technologies and conditions capable of addressing real-world scenarios.

Engineers at the ESIF followed a test plan developed by the Forum on Inverter Grid Interconnection Issues (FIGII), a group that includes representatives from inverter manufacturers, solar power providers, utilities, research labs, and consulting firms. This collaboration among stakeholders helped ensure that all parties would accept the validity of the test results.

One conclusion of the recent report authored by NREL and SolarCity engineers is that measured load-rejection overvoltages were significantly less severe than had been feared. The maximum overvoltage measured in any test never exceeded twice the nominal level, and typical overvoltage levels were significantly lower. Furthermore, the durations of overvoltage were only on the order of microseconds to milliseconds, which represent an acceptably short time duration. Therefore, these results may allay some of the present concern expressed by numerous utilities relating to the potential negative impact of transient overvoltage on grid performance.

“The ESIF-derived results are helpful to HECO as it considers approving the installation of PV systems by customers who’ve been waiting to get interconnected on distribution circuits that already have higher PV penetration,” said Sudipta Chakraborty, Ph.D., NREL senior engineer and section manager of Power Electronics and Controls, as well as the principal investigator for the HECO-SolarCity project.

In a January 2015 filing with Hawai’i’s PUC, HECO stated its intention to increase rooftop solar penetration limits to 250% of the minimum daytime load (MDL)—more than double its current capacity of 120% MDL for hosting distributed solar systems. If this intention is implemented, the increase will represent the highest utility-wide threshold for solar penetration on distribution circuits in the United States.

Future work will delve into how greater solar penetration could actually benefit the grid by enhancing reliability. For example, smart inverters could help utility operators provide optimized voltage support where needed along segments of distribution circuits. Other work will focus on the impact of remotely cutting back the generation of solar power during certain periods, and on using energy storage to handle excess generation of solar electricity. In addition to its load-rejection overvoltage studies, NREL has also been conducting ground-fault overvoltage testing, with results to be available shortly.

HECO is not alone in dealing with these issues related to the higher penetration of interconnected solar generation. Other utilities with customers increasingly requesting interconnection of their distributed solar or wind generation are also eager to have high-quality, quantitative research studies relevant to real-world scenarios to bolster their confidence and guide their operational decisions.

“The results of our studies provide valuable quantitative insight for utilities facing increased PV penetration on their grids,” concludes Chakraborty. “They can have greater assurance that more solar can be added without detrimental impacts, while maintaining safe, reliable electricity to customers.”

Don Gwinner is a senior communicator with Communications and Public Affairs at the National Renewable Energy Laboratory.