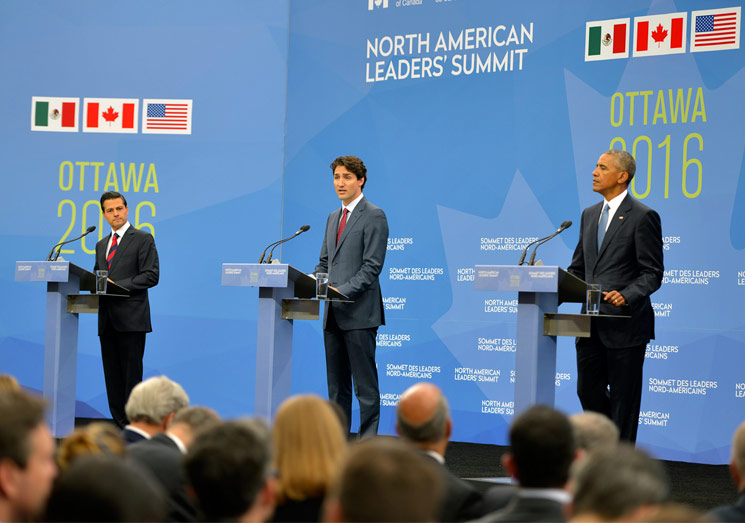 Before the summer as Britain voted to leave the EU, the US, Canada and Mexico were forging even closer ties. With ultra-conservative Harper replaced by Trudeau as Canadian Prime Minister, a progressive agenda is quickly emerging.

In late June, the three countries announced a continental pact on climate at the annual “Three Amigos” conference. They announced the shared goal of reaching 50% clean energy by 2025, and …

“For the first time in recent memory, the national governments of the US, Mexico, and Canada are politically aligned on climate change,” said Gwynne Taraska at the Center for American Progress. “When countries work together, you improve the odds of success.”

The process began in February, when the three countries took first steps toward a North American accord on clean energy and climate. In March, many exciting details were announced: creating a continental smart grid; accelerating innovation in clean energy technologies; ramping up energy efficiency and renewables; phasing out fossil fuel subsidies; protecting Arctic biodiversity; and developing continent-wide infrastructure for electric cars.

These shared goals are exciting and thoughtful, but achieving 50% clean energy quickly is less impressive when you look at the details. Clean energy isn’t confined to efficiency and renewables – it includes nuclear, hydro and even carbon capture.

And the 50% goal is continent-wide. Instead of each country reaching for the goal, an average will be taken of the three countries.

Sadly, this goal comes up way short because it misses the opportunity to transition to 100% renewable energy – which many studies now show is within our grasp. Take Mark Jacobson’s research at Stanford University, for example. His Solutions Project has mapped how every city and the US as a whole can reach 100% renewable electricity, heating and transport, all by 2050. They drill down to every detail – exactly how many devices are needed; their footprint and space required; costs; numbers of jobs, air pollution and climate benefits; and policies necessary for each state to get there.

“The main barriers to getting to 100% renewable energy are social and political, not technical or economic,” says Jacobson. After 2020, solar and wind will be cheaper than gas or coal without any incentives, points out Bloomberg New Energy Finance, and they expect demand for electricity to drop 9%.

One of many campaigns to bring 100% renewable energy to cities is “Ready for 100,” 12 cities have signed on so far, including San Francisco and San Diego – the first to have a legally binding plan. Sierra Club expects to sign 50 cities by the end of this year.

And let’s remember the job growth that renewable energy entails. While oil and gas jobs declined 18% over the past year, those in renewable energy rose 6% in the US – led by solar. The other elephant in the room they ignored is the need to get off fossil fuels. “To actually reach 50% clean energy by 2025 requires making room for real investment in renewable energy infrastructure by keeping fossil fuels in the ground, says May Boeve, Executive Director of 350.org.

That can happen at the stroke of a pen, she adds, noting that President Obama has the authority to halt new fossil fuel development on public lands and waters. Trudeau, of course, has the tar sands to handle.

Read the proposal behind the North American Climate Strategy at http://bit.ly/2cFkx8K.

About the author:
Rona Fried, Ph.D., is president of Sustainable Business.com, a thought leader on green business known for its daily news and Green Dream Jobs service since 1996.