Building a Fleet of Electric-Drive Cars We couldn’t wait for the factories, so we built our own. 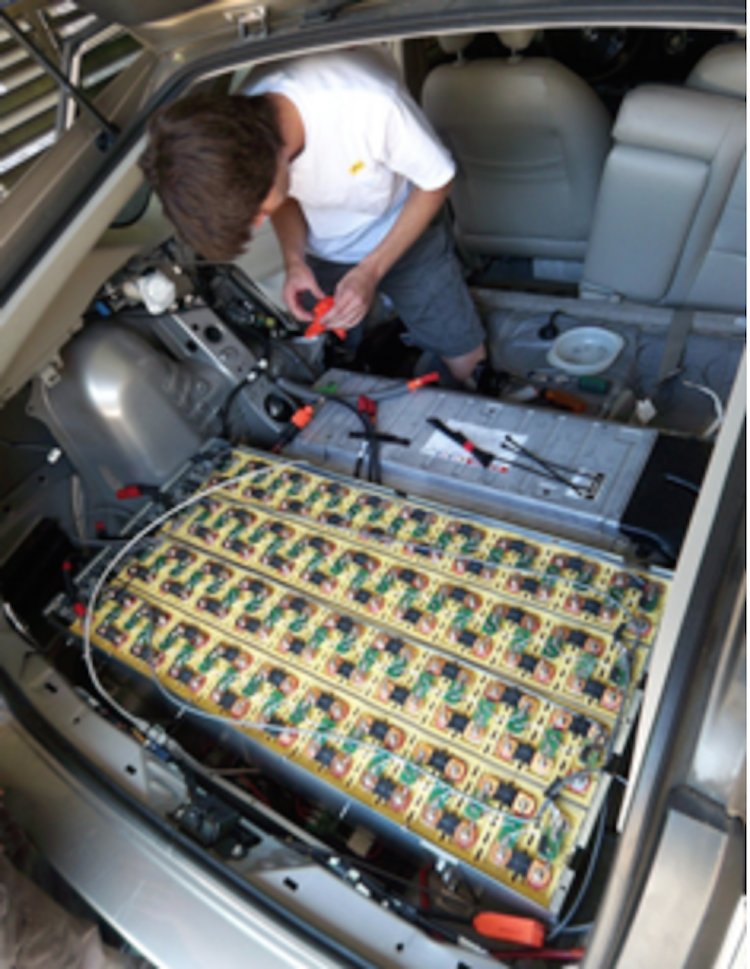 It’s become obvious that big corporate fleets are transitioning gradually to electric-drive trucks for local deliveries, and to com- pressed natural gas augmentation for diesel-powered long-distance fleets (see the box on the facing page). What about small companies like ours? Solar Design Associates has company cars for visiting clients and construction sites. Shouldn’t we be as efficient as possible with our own travel?

It was easy to become convinced that electric transportation is the future after driving one of Steve Heckeroth’s early electric Porsches and Don Aitken’s EV1. Driving a friend’s Tesla Roadster got me fully hooked on electric. What’s not to like about silent, clean, no fossil fuel and virtually no maintenance together with instant torque?

And so, after more than three decades of designing custom, zero-net-energy homes, we wanted to design Energy Plus homes, producing sufficient surplus energy to power the owners’ transportation.

You start any solar home project by optimizing its efficiency. We figured that a solar-charged electric-vehicle (EV) project should begin by optimizing the efficiency of the vehicle. We set out to get all our company cars running on solar.

Electric Prius
I couldn’t justify the cost of a Tesla as a company car, and Toyota did not yet offer a real plug- in Prius. So in 2011 I

decided to convert one of our 2006 Gen 2 Prii to all-electric. The electric Prius became a family project as my son Hunter took the lead. He had been interested in electric transportation since building an electric motor- bike as a science fair project in junior high and, after engineering school, he has become an electronics wizard, working on the power electronics for our renewable energy practice.

For Hunter, the Prius conversion was pretty straightforward and he was able to complete the job in a weekend with time left over for test drives. But with factory EVs now coming on the market, it may make better economic sense to buy a new one, with the factory warranty.

The Prius is a parallel hybrid, meaning that the car is already capable of running on the electric motor alone. The most challenging part was interfacing the new battery capacity with its control logic — or rather, working an end run around the factory control logic. Toyota jealously guards their hybrid software and, at that time, no one had obtained or hacked the code. The only way to go was to spoof the factory control system into believing there were no modifications to the car. The factory brain had to view all of the new battery energy in the system as a simple extension of the meager factory pack.

The car came from the factory with a 6.5 amp-hour nickel-metal hydride battery, good for less than one mile of EV-mode driving at under 25 mph. We beefed up the suspension to accept about 275 pounds of lithium-ion batteries in the rear of the car. We left the factory drive line unchanged. Our modified electric Prius has 10 kilowatt-hours (kWh) of traction battery, good for 30 to 35 miles of all-electric operation as well as the option of 75 to 100 miles of blended mode where electric assist to the internal combustion engine yields 75 to 80 mpg. Toyota now offers a plug-in version of the Prius that comes with a factory warranty — though at 4.4 kWh its battery pack is good only for a claimed 15 miles of EV mode.

We’ve now put about 40,000 miles on the modified Prius. The conversion cost was $12,500, most of it for the lithium-ion batteries.

Better Insight
In addition to the Prii, our company has five Generation 1 Honda Insights, and Hunter’s next adventure was to modify two of them to drive-by-wire, replacing the mechanical throttle linkage with an electronic control system. Using a joystick mounted on the shift lever, he can override factory settings and select how much boost he wants from the electric motor and, conversely, how much regenerative braking he wants. The drive-by-wire plug-in Insight easily delivers 80 to 100 mpg depending on length of trip, and the enhanced electric boost makes it go faster too! He then fit one of the cars with an additional LiFePO4 battery pack with about 3 kWh of capacity and plug-in capability. We have a total of more than 600,000 miles on the insight fleet with few problems. Two original battery packs were replaced under the extended factory warranty

A New Leaf
We got an early position on the waiting list for a Nissan Leaf. The car felt good on the limited test drive during the factory promotional tour and, with 100-mile range, it seemed like the best choice of the first round of factory EVs.

I really like the car and feel Nissan did a very credible job in the design and engineering. It is comfortable, handles well and drives great. There is no substitute for running on sunshine. The silence is deafening, allowing the audio system to deliver even the quietest passages of Beethoven’s Pastoral with unusual clarity.

The Leaf and its counterparts will need more range to attract buyers beyond the early market adopters. Before handing over the keys in July 2012, the dealer made me sign a multi- page disclaimer saying that the 100- mile range estimate was under ideal conditions and implied that I would seldom, if ever, see it. This, unfortunately, turned out to be true.

There are hills in New England. Going up them uses stored power and reduces range. Accessories (heat, air conditioner, headlights) reduce your range. There’s also an inexcusable disconnect between charging of the main traction battery and charging of the 12-volt accessory battery that also powers all the Leaf’s controls. This lets the 12-volt battery go flat even if the car is plugged in. I expect that Nissan will fix this soon.

I’m still glad we got the car. It is a good first effort and will surely improve with time. I’d recommend it to anyone who has a modest daily mileage requirement. I could share a good deal more on our Leaf experience but there is far greater detail on all aspects to be found on the web than I couldn’t possibly address here. We’ve driven the Leaf about 5,500 miles, all in short trips.

Running on Sunshine
We have a 10-kilowatt-peak (kWp) rooftop array to power our office, consisting of 40 Sharp 200 Wp modules feeding Solectria inverters. Many of us also have arrays at our homes and we can plug in day or night. The plug-in hybrids charge from a standard 120- volt, 20-amp circuit. We charge the Leaf with a 30-amp, Generation 2.5 EV Link charge port from Schneider Electric.

Zero Times Two
For another dimension of mobility, not to mention exhilaration, we bought two electric bikes from Zero motorcycles. These bikes are a kick in the pants. They ride like a fossil-fueled machine except with better low-end acceleration, as electric motors have instant torque from a standing start. They are fast and odor-free. The regenerative braking is cool. And they’re eerily silent. You can listen to the wind! There is nothing like running on sunshine in silence!