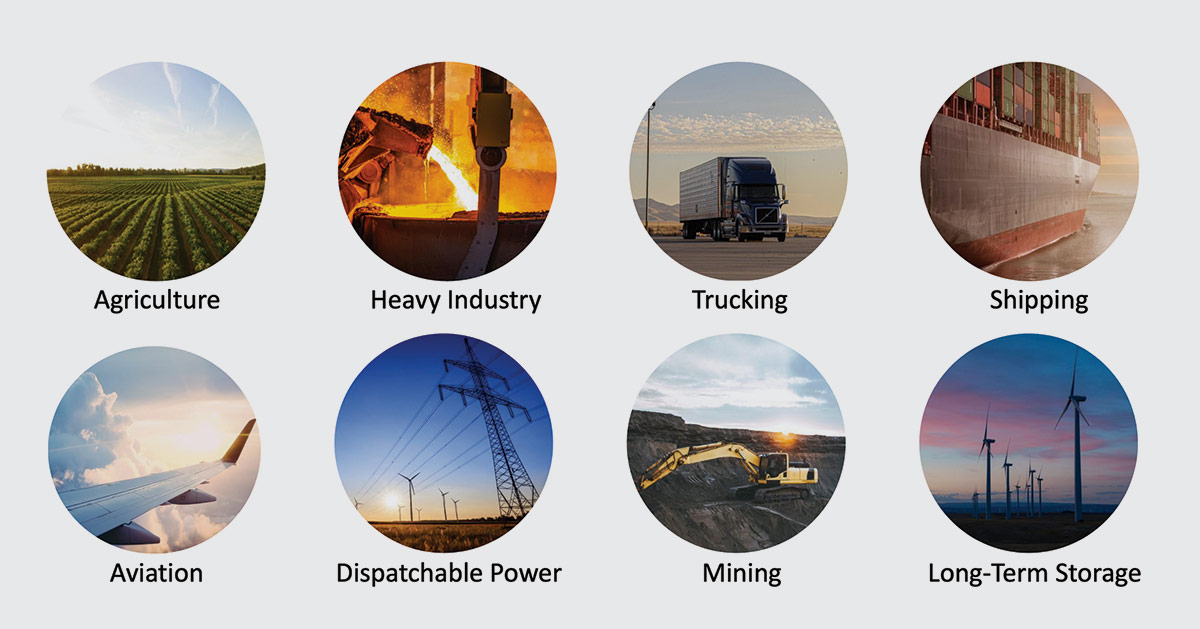 Green hydrogen can be used as a carbon-free fuel and enables the deep carbonization of hard-to-abate sectors. © Green Hydrogen Coalition

A long-term plan for decarbonization has officially been set in motion by the Bipartisan Infrastructure Law (BIL) signed on November 15, 2021. The once in a generation investment includes $8 billion for at least four regional hydrogen hubs, $1 billion for electrolysis research development and demonstration, and $500 million for clean hydrogen technology manufacturing and recycling R&D.

On May 15, 2022, the U.S. Department of Energy (DOE) is required to deliver a National Hydrogen Strategy Roadmap to Congress as well as a Clean Hydrogen Standard document. Four or more H2 hubs will be selected one year later, with prioritization going to those with the most diverse feedstocks, most diverse end-use, geographic diversity across the US, hubs in areas with the most natural gas resources and areas where new employment opportunities would be the greatest.

This significant funding investment builds upon numerous efforts by DOE and others. Long-term viability of a hydrogen economy has been outlined by a coalition of major industries and stakeholders in the 2020 FCHEA Roadmap to a U.S. Hydrogen Economy. The report details how a competitive hydrogen industry will reinforce U.S. energy leadership, significantly reduce carbon emissions and strengthen the U.S. economy by generating $750 billion per year in revenue and a cumulative 3.4 million jobs by 2050. The roadmap highlights the uniqueness of hydrogen as a zero-emissions vector and describes a mature hydrogen economy in four phases over the next decade including immediate steps, early scale-up, diversification and broad rollout .

The 2020 DOE Hydrogen Program Plan emphasizes the need for a comprehensive and diverse energy portfolio striving for resiliency, economic value and environmental benefits while seeking to reduce carbon intensity of transportation, electricity generation and manufacturing. H2@Scale is a DOE initiative envisioning how innovations to produce, store, transport and utilize hydrogen can help achieve scale to drive opportunities and reduce costs. In June 2021, DOE signaled its commitment to accelerating hydrogen deployment by announcing its first “Energy Earthshot,” the Hydrogen Shot, to reduce the cost of hydrogen produced using electrolyzers to less than $2 per kilogram by 2026.

HyDeal LA: a Leading Example of a “Green” Hydrogen Hub

Los Angeles is aiming to become the first green hydrogen city in North America and a global leader in multi-sectoral decarbonization. HyDeal Los Angeles serves as a template and catalyst for green hydrogen hubs in the U.S. with an accelerated target of 100% renewable energy by 2035 under Mayor Eric Garcetti’s Green New Deal, citing the critical role of green hydrogen for in-basin power plants. “Green hydrogen is a gamechanger in this transition to a low-carbon future, as the only viable, scalable option to decarbonize sectors that are difficult to electrify – such as heavy-duty trucking, seasonal renewable energy storage, industrial processes, shipping, and aviation.”

HyDeal LA will bring together the entire value chain across the LA Basin with low-cost electrolytic production, transport, storage and multi-sectoral aggregated offtake. Crucial to the plan will be transportation via a 310-mile dedicated 100% hydrogen pipeline connecting LA with Central Utah and underground geologic storage located in salt domes in Utah. The Green Hydrogen Coalition’s HyDeal LA will create the first competitive, high-volume supply chain for green hydrogen in North America, with the goal of delivering green hydrogen at $1.50/kg by 2030, in addition to;

Initiatives of the Green Hydrogen Coalition focus on policy and commercialization efforts. The first initiative is to establish a regional green hydrogen strategy for the West by providing decision makers with the information, tools and policy support to deploy projects. HyDeal also includes initiatives to co-create a path forward with local communities via the Authentic Community Engagement Innovation Initiative (ACE).

“HyDeal can rapidly scale green hydrogen production and use by displacing natural gas in the power plants around the Ports of LA and Long Beach helping LA achieve 100% renewable energy affordably. Converting solely cargo-handling equipment and heavy-duty vehicles within the Ports of LA/LB from diesel combustion to fuel cell EVs would eliminate 555,280 tonnes of CO2e per year,* an impact equivalent to planting 9.2 million trees” (Source: Port of Los Angeles Inventory of Air Emissions – 2019).

Note: Our article on green hydrogen in Spring 2022 implied that all of the four or more hydrogen hubs would solely have green hydrogen, which is produced from water. According to Utility Dive, at least one of these hubs will utilize gray hydrogen, which is produced from methane. To align with the mission of our association, Solar Today is clarifying that we do not plan to promote the expanded use of fossil fuels.

About the Author
Janice Lin is the Founder and Chief Executive Officer of Strategen and the Founder and President of the Green Hydrogen Coalition. Janice has over 25 years of strategy experience and has distinguished herself as a leading clean energy changemaker and visionary. Janice co-founded and for a decade served as Executive Director of the California Energy Storage Alliance, where she helped create the world’s most robust energy storage market. Janice is an internationally recognized thought leader in energy storage and grid decarbonization and won the 2019 Cleanie Award for Entrepreneur of the Year.