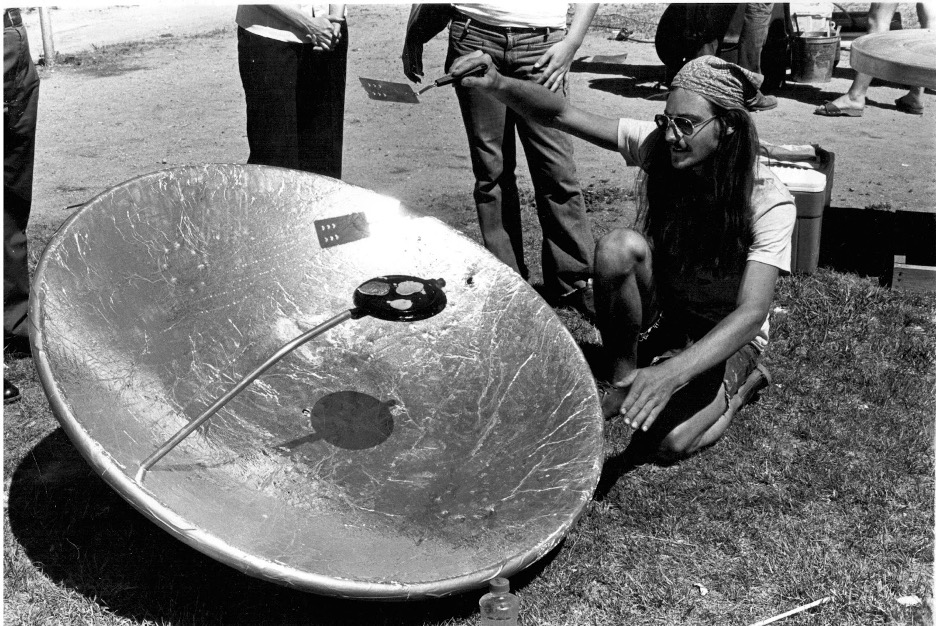 My fascination with solar cooking began when I was a kid and heard someone say it was hot enough to fry an egg on the sidewalk! That seemed not only impossible but absolutely maddening trying to get those little bits of gravel out of your egg.

As an architecture and planning student at the University of New Mexico in the 1970s, I was excited to go to Sandia National Laboratories on alternate Fridays for its special Sandia Salvage Sale, where all manner of scientific parts sold at impossibly cheap prices, like satellite dishes and components that might be useful in building, say, solar cookers.

My friend Roberto Parisot, the architect and kinetic sculptor, designed a robot that would collect solar energy to make a cup of tea. Not to be outdone (and because I’m very practical), I converted my parabolic reflector into a pancake maker by covering it in aluminum foil and placing a self-leveling griddle at the focal point of the parabola that could easily reach 300°F or 400°F. I got badly sunburned that day and should have worn welding goggles.

Cooking with the sun can be as simple as a foil wrapped veggie-melt sandwich on the dashboard of a car parked in the sun. The United Nations Educational, Scientific and Cultural Organization developed a family-size solar pot that we use for soups and roasted sweet potatoes, but this article is about big solar cooking — the Sun Oven Villager — a solar cooker large enough for a turkey, potatoes and a couple pies. The Villager weighs around 500 pounds and the trailer that hauls it adds a couple hundred more.

The New Mexico Solar Energy Association was fortunate to be granted a Villager by Sandia National Laboratories in the ‘70s for our solar fiestas and other educational events. Here’s the official site where you can learn more: www.villagersunoven.com/about-us

In June 2019, after years of faithful service of sharing the joy of solar cooking with thousands of New Mexicans, we saw vandals had stolen the trailer and damaged the Villager. Over the next several months, countless hours were spent rebuilding it. And on Oct. 26, the Villager was restored to its full solar-cooking glory. We’re proud to show it off at SOLAR 2022 in Albuquerque!

To learn more about the origins of passive solar, NMSEA, the Villager solar cooker, passive solar heating  and even crop drying, watch Luther Krueger’s interview with Mark Chalom and Betty Tsosie as they discuss Reaffirming Generations of Solar Wisdom.

About the Author
Andrew Stone is a lifelong solar enthusiast, is a lifetime member of the New Mexico Solar Energy Association, and was instrumental in planning and running the first annual Solar Fiesta at the University of New Mexico in 1977 and SOLAR 2022. He built passive solar adobe additions on homes in the ’80’s and permitted the first Public Service Company of New Mexico-grid-tied PV system in 2005. In 2016, he added one of the first grid-tied Tesla PowerWall battery-storage systems to make a residential nanogrid.

One Reply to “Big Solar Cooking: The Sun Oven Villager”