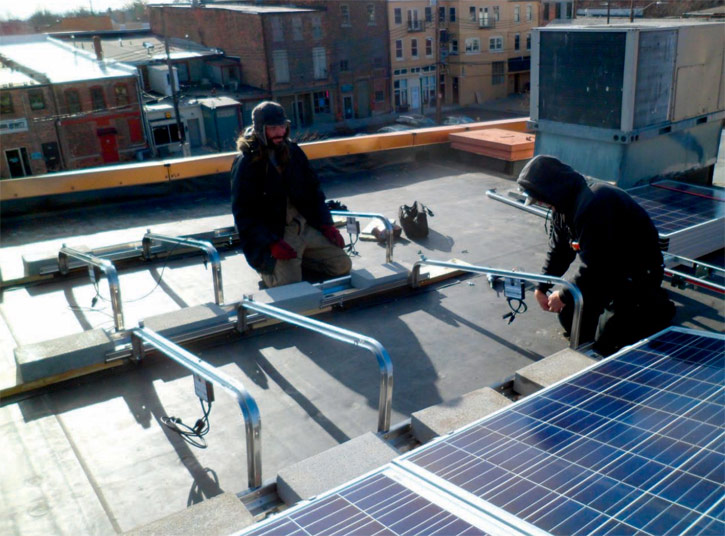 Solar Ypsi is a group of volunteers who educate, design, and install photovoltaic (PV) systems around Ypsilanti, Michigan. Started in 2005, SolarYpsi has given over 200 face-to-face presentations to over 5,000 people at local events and reached over a quarter million views on YouTube (SolarYpsi.org/GoogleVideo.html) in 2011 when Google featured SolarYpsi in a nationally televised commercial. Founder Dave Strenski has been invited to speak at dozens of local organizations and gave a TEDx talk in 2013 (SolarYpsi.org/TEDxVideo.html). His dream is to make Ypsilanti a “Solar Destination,” a place to learn about solar energy with hundreds of examples around town (SolarYpsi.org/AerialVideos.html).

SolarYpsi receives a steady stream of phone calls, letters, and emails asking for help with solar projects or requesting a presentation. When Strenski’s home phone rang one evening in the summer of 2014, it turned out to be an unusual request. The caller asked for Dave, and then started to explain how they wanted to donate $75,000 to SolarYpsi to fund more solar projects in Ypsilanti. Strenski was elated, but reluctantly had to tell the caller that SolarYpsi could not accept the funds since it was not a 501(c)3 organization, nor even incorporated. Not wanting to miss a potential opportunity, Dave asked the caller for a few days to think over a way for a charitable donation to be put to use.

An initial idea was to partner with an existing organization to broker the funds. However, a portion of the funds would need to pay for the partnering organization’s incurred costs. Another idea was for the donor to pick several local non-profit organizations to receive funding for a PV system. This plan was appealing to the donor, and soon the details fell into place.

SolarYpsi would donate the work of putting together a list of organizations interested in being considered, and the donor would choose five nonprofits from the list. After the organizations agreed to participate, SolarYpsi would solicit contractors to submit bids on all the locations combined. The donor would select a contractor and then contribute directly to each non-profit, and the projects would go forward.

SolarYpsi volunteers quickly created a list of 14 appropriate organizations, based on suitability for a solar project. Besides being a charitable organization, a qualifying non-profit would need to have an ample-sized facility that could support a 5,000-watt solar installation on its building and hopefully be located where the solar panels could be seen by visitors. While not an exhaustive list, the organizations included a variety of types of non-profits, including schools, a library, a health center, community centers, city properties, and churches, many of which had already agreed to host a solar project. To facilitate the selection process, SolarYpsi compiled basic information about each organization, including a photo showing exactly where the solar panels could be installed, plus a description of each building’s solar exposure and visibility by the public.

The donor reviewed the list of nonprofits and then opted to fund six organizations instead of five! The selected recipients included the Ypsilanti District Library, Parkridge Community Center, Ypsilanti’s Senior Center, Washtenaw International High School, the Corner Health Center, and the City of Ypsilanti Department of Public Services. All told, the donor contributed a total of $93,000. In the words of Ypsilanti’s Director of Public Services, Stan Kirton, “The generous donation of solar panels for the DPS Truck Port enhanced the City’s continued efforts to reduce its carbon footprint. We hope to one day increase the number of solar panels on the truck port to generate enough electricity to provide power for the entire operation of the DPS Administrative Building.”

Economics of Scale with Zero Overhead

Bundling all the projects into one larger job was critical to attracting competitive bids from contractors and reducing or eliminating administrative costs on the part of the recipient organizations. With SolarYpsi assisting with the evaluation of the bids, neither the donor nor the recipient groups needed to divert time away from their own work in order to study options. SolarYpsi helped to field questions from contractors as they put together their quotes. SolarYpsi also made sure that the bid price was all-inclusive and not to be exceeded, given that the organizations would not be able to secure any extra funds if the installation costs ran higher than anticipated. Local contractors submitted quotes, and the donor chose to go with S.U.R. Energy, which had an average install price of $3/watt across all six locations. This is a lower price than what the organizations could have obtained if each small project had been bid separately.

Each organization then contacted S.U.R. Energy and contracted the work using the predefined quote. Thus every dollar donated was used only for the solar installations. The staff of the organizations had very little distraction from their day-to-day activities because all the details had been worked out ahead of time. The organizations simply needed to pay the solar contractor, with the donated funds, when the work was completed. SolarYpsi visited the sites during the installations to take pictures and document the projects on its website. This also made it very easy for the organizations to spread the word about their solar installations on social media by simply pointing to their page on the SolarYpsi website:

The Gift that Keeps on Giving Solar installations are a great way to provide support for a non-profit organization. Non-profits are in the unfortunate position of not being able to take advantage of the 30% Federal Renewable Energy Tax Credit by the very nature of being a non-profit. This makes it considerably more expensive for non-profits to install PV. By donating funds to a non-profit for a PV installation, we can greatly reduce or nearly eliminate their electricity bill for the next 30 years! Reducing an organization’s utility bill continually frees up money in its operating budget that can instead be used for its programs. It’s also easier for a non-profit to raise funds for its programs than for its electric bill. Librarian Joy Cichewicz summed it up like this: “Our branch is saving about $900, almost 24%, per year on our electric bill. In addition to the financial savings, we serve a community that is very conscious of using sustainable resources. Anything the library can do to support that value is relevant. We are grateful for the generosity of the anonymous donor and for Dave in making this a reality.” Beyond dollars and sense, solar installations provide positive visibility for the organization, serving as an example of the organization’s commitment to a better future.

Ashley Fox, a teacher at Washtenaw International High School, put it this way, “Beyond saving our school $800 on its electric bill last school year, the solar panels have fueled inquiry in our school community. They have been the subject of scientific study in physics and environmental systems and societies both on an individual and class level. They have helped government classes consider the connection between sustainability, school budgets, and public policy. Furthermore, the investment in solar panels has been a powerful visual reminder for students that there are concrete ways for regular people to help create answers to major problems. Such an investment served as inspiration for coordinating overarching sustainability efforts for our school community, and making partnerships beyond our school.”

Where We Go from Here…

The anonymous donor project was tremendously successful. For SolarYpsi, it is now a model for future funding partnerships. There are probably dozens of local community organizations that have facilities suitable for a solar project. SolarYpsi continues to seek funding opportunities to connect these groups with money-saving solar technology.

Another project we are working on is a city-wide solar rebate project. Find more info on our website: SolarYpsi.org/5MW_ project.pdf. While volunteer labor reduces the price of a solar installation, we can only manage a few projects a year. To really grow solar power we need hundreds of installs per year, and the best motivator is a lower price. With a typical 5 kW solar installation costing about $15,000 ($3/ watt), we’re hoping to get funding to give out a $1/watt rebate, or $5,000 on a typical install. This coupled with the 30% Federal Renewable Tax Credit means the homeowner pays a third, the tax credit pays a third, and the rebate pays a third. If we could increase the volume of solar installs within the four square miles of Ypsilanti, contractors would get tremendous economics of scale and shorter travel distances between jobs and dramatically reduce the price of a solar install in our area. Then with this new price point, neighboring areas would also benefit, and like ripples in a pond solar power via PV would spread across the state.