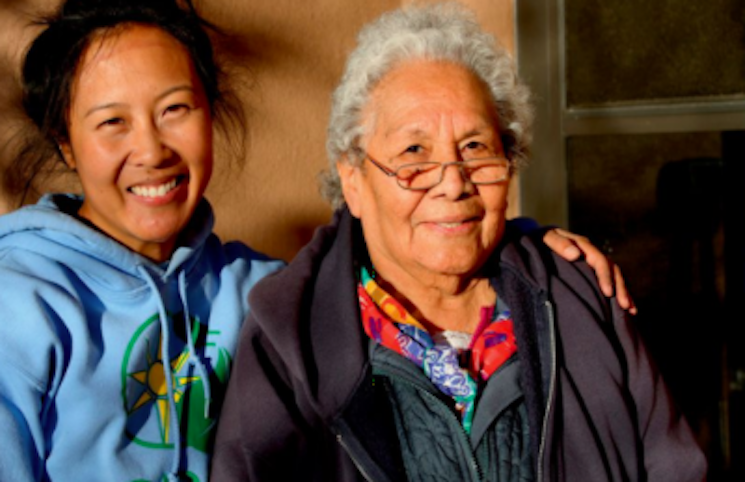 Runner was born on the Picuris Pueblo, high in the Sangre de Cristo Mountains of northern New Mexico. Once the largest of the northern Pueblos, the community today has 328 enrolled members and just 86 living on the Pueblo. As a tribal elder, All Runner has seen a great deal of change in her lifetime. She can distinctly remember a water pump in the village that froze during the winter, prompting the family to laboriously haul water from the river. They had none of the conveniences typically considered core home life essentials – light, electricity, indoor plumbing. And even now, during chilly Rocky Mountain winters, a constant fire in her wood stove heats the home she shares with her son Ed, whose collection of track and field trophies gives testament to the family name.

The Picuris of today have more modern amenities than in times past, but in some ways, life here is as challenging as it has always been. Located in a remote area far from urban centers, Picuris Pueblo is a resilient community with a diverse economy, and families here have been able to preserve their culture and lifestyle. Modern Picuris is home to a high-quality charcoal briquettes manufacturing plant, a thriving herd of bison, and is the majority owner of the Hotel Santa Fe. Yet, even with these businesses, the tribe struggles to find economic opportunity for its residents. Most tribe members must travel off the reservation for work, and many are unemployed.

Rose All Runner was skeptical at first when she was selected to receive solar panels on her roof as part of a demonstration project with nonprofit GRID Alternatives and the Northern Pueblo, but today, the 12-panel, grid-tied system she received has significantly reduced her monthly energy costs. Its installation also provided hands-on training for community members, and is helping educate the community about solar technology and its benefits.

The project was funded by a grant from All Points North Foundation (APNF), a small, private foundation based in Boston, MA, dedicated to driving awareness, education, training, and hands-on application of solar as a practical and cost-efficient energy source. The purpose of the project, which includes three installations for Northern Pueblo families, is to model sustainable energy development in Native American communities.

GRID Alternatives, a national organization that makes solar power and job training accessible to underserved communities, has partnered with over 30 tribes across the country to install solar for more than 330 tribal members since 2010, and works with tribal colleges to provide students with hands-on training to supplement their solar curriculum.

These partnerships have generated savings of up to 90 percent on electricity costs for families, while preserving cultural traditions with clean, renewable energy whose source is non-imposing on the land. Partnerships and participation are built with local community organizations, job training groups, energy efficiency providers, and solar subcontractors for employment opportunities. And the cost to the communities has been minimal, with funding provided by corporate, foundation, and government grants and incentives.

When done right, solar development in these communities can have a domino effect of providing training, creating job opportunities, promoting partnerships and volunteerism, and ultimately becoming a local and regional economic “engine that can” while fighting climate change that burdens the nation.

“GRID looks out for those who can most benefit from solar power and solar jobs and APNF is proud to support their important work with Native American communities,” said Laura Staich, executive director of APNF. “This pilot is powerful and serves as an affirmation of how tribal nations are successfully adopting and adapting to solar, finding a foothold in green training through “classroom rooftops” for tribal members and their inspiring communities.”

Intent on bringing solar to benefit “all of us,” GRID Alternatives was honored for its work with tribal communities in 2013 by the U.S. EPA Region 9, and expects to continue to expand its partnerships with tribal communities across the U.S. GRID formally launched its national tribal program in 2014, building on work begun in 2010 in California, and opened its first tribal satellite office to serve families in the North Coast region of California. The nonprofit also partnered with like-minded Henry Red Cloud’s Lakota Solar Enterprises and Trees, Water & People in an inter-tribal demonstration project on the Pine Ridge Reservation in South Dakota in July of 2014. Project leaders point to these initiatives as affirming the belief that reducing dependence on expensive and polluting fossil fuels is critically important. And, they add, on tribal lands, it is imperative. In 2014, GRID Alternatives was recognized as a Champion of Change by the White House.

Demonstration projects like GRID’s are helping build momentum among tribes around bold renewable energy visions. The Picuris Pueblo, along with its supportive housing authority — the Northern Pueblo Housing Authority (NPHA) — has ambitious goals to extend solar photovoltaic (PV) in its community. The tribe had already installed a solar electric system on its 2,640-square-foot firehouse, New Mexico’s first net zero energy building in Penasco, about 50 miles north of Santa Fe.

“NPHA is thrilled to be partnering with GRID Alternatives and All Points North Foundation to provide a home solar powered system to a low-income homeowner at each of the three New Mexico Pueblos we serve,” said Scott Beckman, executive director, NPHA, noting that Ms. All Runner was already saving $80 a month. “That’s a life-changing lot of money for someone living on a fixed income so she is very happy with her new system. We’re hopeful that positive results like these will be part of building the awareness and support partnerships like ours need to bring the benefits of renewable energy to homes around the country.”

For Forestry and Fire Director Luther Martinez, Ms. All Runner’s installation was not only a logical next step for the community, but also a great opportunity to provide a real-time platform for education about solar technology, and to help them better maintain the fire station’s system. “Picuris Pueblo is an isolated community, so we have to just use what we have got,” he said. “If anything breaks we will now have some knowledge on how to fix it.”

And they will need that knowledge. In March, Picuris Pueblo was awarded funding by the Department of Energy via the Northern Pueblos Housing Authority to install a one megawatt solar array to offset the electricity of all 50 homes and 12 tribal buildings. (See: http://energy.gov/articles/energydepartment-announces-over-9-million-funding- 16-indian-and-alaska-native-community.)

“Solar power is a great tool for tribes that are looking to develop economically in ways that resonate with our cultural values,” said Tim Willink, Director of Tribal Programs for GRID Alternatives, who is himself a Navajo. “It can reduce energy costs for families and communities, bring power to remote regions for the first time, and provide new employment opportunities in places where they are scarce. And best of all, it’s clean, with very low impact on the land.”

Each project is unique, developed in close collaboration with the local community to align with their development goals, cultural and ancestral heritage, and sovereignty. And the projects are designed to not only last but become springboards for future projects, with built-in skill building and community education opportunities that ensure the expertise to maintain the systems and build new ones remains with the tribe.

Recent projects include four grid-tied residential photovoltaic (PV) systems in a housing development built for low-income Spokane Indian families in eastern Washington; a solar array installed by tribal volunteers and university students on the home of Karen Spotted Tail in South Dakota, a Rosebud Sioux whose community faces unemployment rates as high as 83 percent; and an off-grid solar electric system for a Navajo elder and Vietnam Veteran in Arizona who had never had electric power before. In early 2016, GRID will install solar systems for two more Northern Pueblo families as part of the demonstration project that included All Runner’s installation.

GRID also provides one-year service learning fellowships for tribal members through its SolarCorps program, including Cheyenne Poorbear, a Lakota Sioux Tribal Member from Pine Ridge, who volunteered with GRID Alternatives while living in Denver and was hired to work with tribal communities in California’s North Coast.

Both APNF and GRID Alternatives leadership recognize the importance of driving demonstration projects forward, not as fleeting, one-time efforts but as a solutions-oriented springboard for both scalability and sustainability. Partnering closely with tribal communities and rooting projects in their broader development goals promotes continued opportunities for economic growth, providing the tribal residents not only with connectivity of solar “power” but “power” of another sort – important work experience, professional and practical working partnerships, and a growing economy in an area where the benefits have a very high impact.

But helping tribes scale solar will require sustained, long-term investment not just from nonprofits and local foundations but also from the government and business sectors, as well as policies that support solar development. In places where net metering is not supported, for example, the economics of grid-tied solar PV are challenging at best.

“The opportunity here is tremendous,” said GRID Alternatives CEO and co-founder Erica Mackie. “By working in partnership with tribes and investing in their vision for renewable energy development and sustainable economic growth, we can help bring cleaner air, lower energy costs, and good job opportunities in places that need them most.”

The hurdles to creating true scale make this work that much more of a priority for APNF. From the start, APNF has been intentional about supporting communities that have been overlooked or underserved. As the All Points North Foundation’s own logo, a compass, symbolizes, all people and communities should have the opportunity to overcome adversity and APNF is dedicated to navigating communities upward.

The funding of the three Pueblo demonstration projects is the latest in a string of APNF solar energy grant making. APNF grants to date across the country have empowered students to lead a cultural shift in their schools, brought solar to a theatre stage, and helped a wildlife sanctuary cut electricity costs. Through the Center for ReSource Conservation ReNew Our Schools grant, schools compete to see who can lower their energy footprint by the biggest percentage using their eGauge energy monitors to analyze their electricity use. Those that reduce electricity use by the greatest percentage walk away with photovoltaic systems on their school roof. For Dell’Arte International, APNF’s grant enables the critically acclaimed theatrical organization to increase the theatre’s energy efficiency and utilize the region’s available solar power. A 17kW solar generator will offset up to 70 percent of its electricity use. APNF also helped Everybody Solar harness the power of the sun for Wildlife Associates, a 120-acre wildlife sanctuary in San Francisco’s Half Moon Bay.

APNF invites other like-minded corporations inside and outside the renewable energy circle to collaborate on future projects. “There is undoubtedly strength in numbers when collaborating partners – tribal communities, housing authorities, nonprofit organizations, private foundations and solar installers – can come together to provide financial support, job training, and in-kind resources,” noted Staich who saw first-hand the need of tribal communities during a site visit to New Mexico. “We invite other organizations to partner with these resilient tribal families and communities to continue to enhance their quality of life while paying homage to their Native cultures and environment.” ST

Mark Dudzinski is a board member of All Points North Foundation, a small, private foundation based in Boston, MA. He also serves as the volunteer chairman of its Solar Subcommittee. After “retiring” from a 27-year high profile career as Chief Marketing Officer with GE Energy, he took the diverse skills he honed in the business world and now applies it to helping others through philanthropy work at APNF nationally. Internationally, he is founder of Light the World, a non-profit organization dedicated to bringing cost effective lighting to the 1.2 billion people who live by firelight when the sun sets. He is intent on changing the electricity delivery model globally.