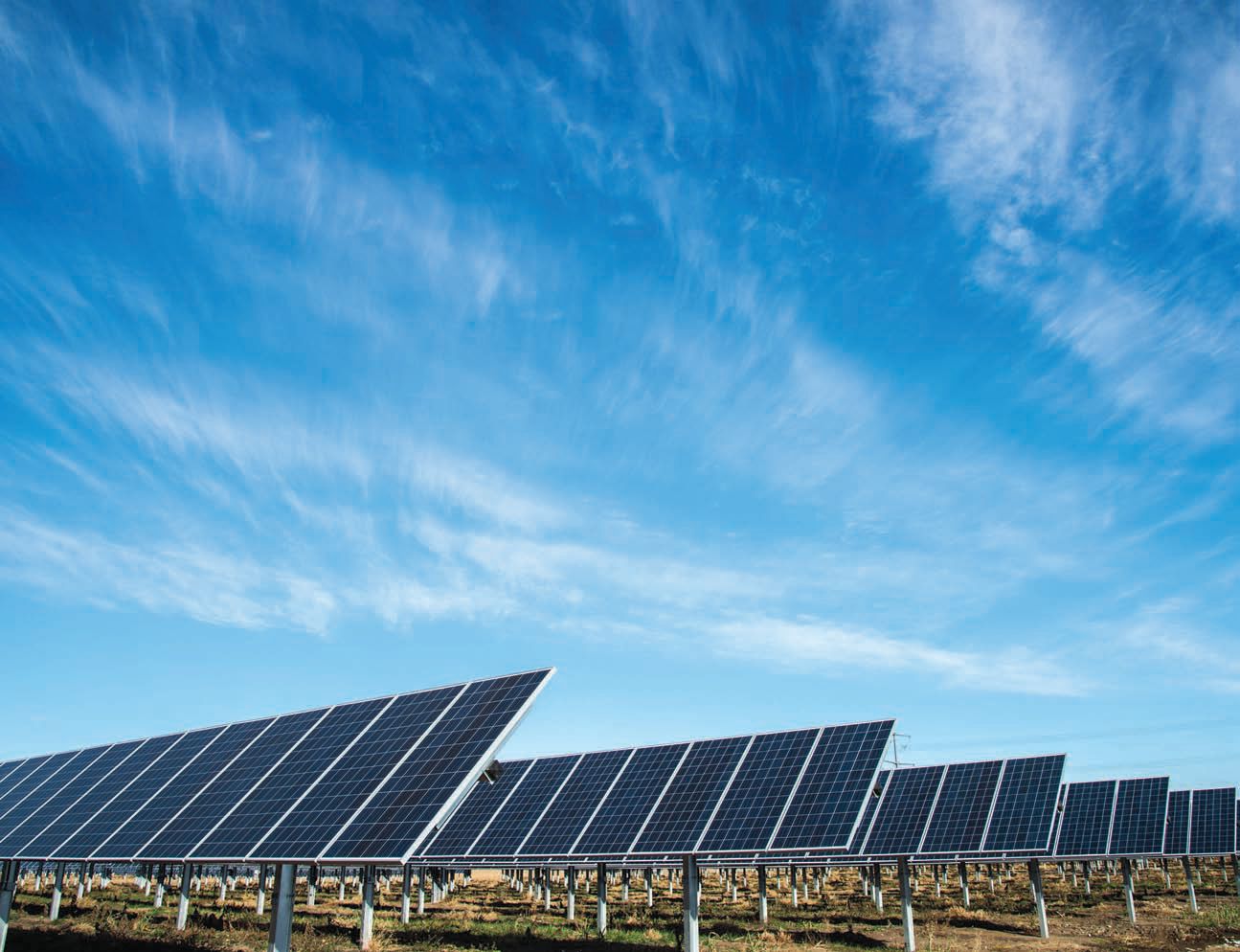 Based on recent results, the cost of renewables is now cheaper than coal generation. © American Public Power Association.

In this article, we explore current and future trends in utility-scale solar and wind and the potential for the movement to a 100% renewable electric grid. Using some recent renewable power purchase agreements (PPAs), we perform a case study on an electric co-op in Colorado – the Platte River Power Authority (www.prpa.org/). As we are considering utility-scale renewable project pricing, let’s look at PRPA’s 2017 resource cost as a comparison (see Figure 1).

Austin Energy announced in December 2017 that it had accepted a record low US bid for a solar power purchase agreement (https://bit.ly/2DdQJ02). Estimates put this bid as low as $21/MWH fixed for 15 years.

Also, the results of Mexico’s most recent energy auction were released on November 22, 2017, with 16 different bids at an average price of $20/MWH (https://bit.ly/2ATzwYL).

Canadian Solar was awarded 370 megawatts (MW) and Enel Group a new record low wind PPA at $18/MWH (https://bit.ly/2ATzwYL). In December 2017, Xcel Energy released its RFP responses. Xcel received 96 bids for wind, with the median at $18/MWH totaling over 42 gigawatts. Wind plus storage bids had a median bid of $21/MWH.

Based on these results, the cost of renewables is now cheaper than coal generation; as shown above, PRPA’s average cost for coal generation is above $27/MWH. Since PRPA is a located close to the lowest cost coal reserves of the Powder River Basin (https://yhoo.it/2Qh7Rrp) of Wyoming, this is one of the lowest cost coal-fired power plant operators.

The average cost for large investor-owned utilities in 2016 was about $35/MWH for coal, according to the US Energy Information Administration (EIA). Another important aspect of the above renewable bids is that the RFP-to-bid process takes time – maybe over a year. This means we are seeing old renewable energy cost dynamics at play, and current costs may be even cheaper today.

This new module is estimated to cost 40% less to manufacture and will also lower labor installation cost by up to 55%. First Solar is projecting a 40+% decrease in full system costs by 2020. First Solar has confirmed it currently has the lowest cost project structure, so future PPA pricing could be trending below $15/MWH.

The Chinese decision – June 2018 On June 1st, 2018, China’s National Development and Reform Commission (NDRC) set a limit on solar installations to 30 gigawatts (GW) for 2018 (https://bit.ly/2DFEgqq). The ripple effects on the Chinese solar supply chain have driven down costs and the average selling prices of silicon-based solar modules from China. Here is a quote from Cao Haiyun, the CEO of Jinko Solar on June 26, 2018 (https://bit.ly/2N9DPE6): “In terms of cost improvement, we are targeting I think a 20% improvement. And then roughly for the multi and mono products, the cost will improve to 24% to 25%.

The current trends show First Solar still in the lowest cost position, but the Chinese Si-based manufactures are also reducing costs rapidly. The upcoming competition in the utility solar space will lead to much lower bids in response to Request for Proposals (RFPs) executed in 2018 and 2019. Looking at these new cost dynamics, bids in 2018 and 2019 will fall well below $20/MWH, making the move to a 100% renewable electric grid more feasible.

PRPA Case Study: How Much Renewable Energy Generation Can We Really Achieve?

To compare these recent low PPAs with 2017 generation costs for a utility, I performed a case study on an electric co-op in Colorado – the Platte River Power Authority (PRPA). PRPA is an electric co-op that serves four cities in Colorado: Fort Collins, Longmont, Loveland, and Estes Park. Over the past year, the communities that PRPA serves have called for more renewables and less coal-fired generation (https://bit.ly/2D0c3cS). This trend is not just municipalities, but large corporations (with large electrical loads) as well (https://bit.ly/2xYxKoz). PRPA had about 75% coal generation (Craig and Rawhide) in 2017, at a cost of $27-28/MWH. PRPA also buys federal hydropower (LAP in the graph) at about $32/MWH.

Using the current data points for PPA pricing, I have run grid simulations for PRPA by using the most recent 12 months of hourly load data (8760 model) for this electric co-op. I loaded the 2017 8760 hours of PRPA loads into Homer Energy software.

Homer Energy is an economic grid and micro-grid software modeling platform. Homer analyzes all the possible sources for electric generation and matches each hourly load for the year, with solar, wind, storage, grid sales and purchases executive car service phoenix near my location. In doing thousands of simulations, Homer arrives at the mix of generation, electric purchases and sales that will minimize the levelized cost of energy (LCOE). The LCOE is a very similar metric to a long-term power purchase agreement (PPA) – a fixed cost for 15-20 years. My simulations included wind, solar, natural gas generation, storage, grid purchases and sales, and they assumed no coal generation. I ran over 100,000 simulations, and many of them had the levelized cost of energy (LCOE) under $25/MWH. The way to look at these results is as “what if” scenario analytics.

My assumption for solar was for an on-site solar array at PRPA’s existing coal and natural gas plants and for wind projects in Wyoming. I used PPA costs of about $24/MWH for both wind and solar to include some estimates for integration costs.

This modeled system picked 600 MW of solar and 450 MW of wind, resulting in 80% (48.2% wind, 31.4% solar) renewable energy penetration, with grid sales and purchases of about 20% each. The LCOE for this simulation is about $25/MWH, lower than all the current generation costs for PRPA, and lower than PRPA’s total average current cost of generation of $30.85/MWH.

The LCOE of PRPA’s current generation mix would be much higher due to inflation. A future proposed generation mix for PRPA is show above in Figure 2. We can see from this modeling that we can have a future state of 80% renewables, with a lower LCOE than the current cost of coal generation. Also, PRPA would be generating more renewable energy than the energy it provides to its municipalities, selling the excess to others in Colorado – helping them with their renewable targets.

Another important dynamic is the capacity factors for wind and solar. For our Colorado example, wind and solar combined can achieve a 60% capacity factor or better; wind can be over 45%, and utility-scale solar 25%. Wind and solar work well together, as it is windier in the winter and shoulder seasons, and windier at night, whereas solar produces more in the summer and in the daytime.

The dramatic declines in the cost of renewables are starting to change electric markets and utilities. While there are still technical challenges in a fully 100% renewable grid, how about the 80% renewable grid by 2025-2030?

Bill Ellard is an energy economist and consultant, servicing businesses, utilities, and municipalities, and focusing on distributed energy implementation, solar energy, demand side management, microgrid development, facility energy management, and renewable energy integration. He can be reached at bellard@yahoo.com.