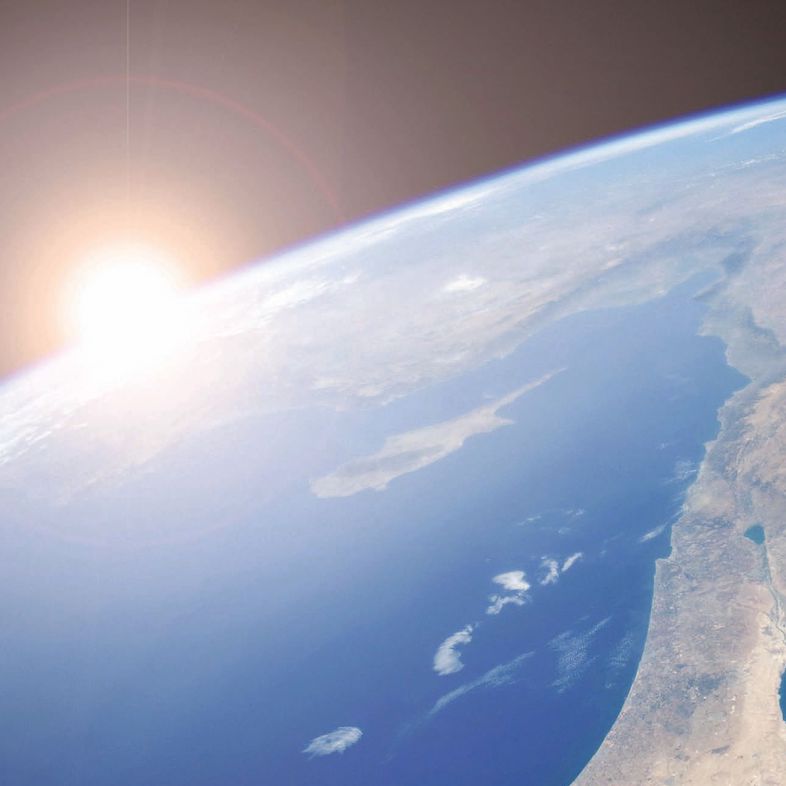 © NASA - Earth Observation taken by the Expedition 40 crew aboard the International Space Station (ISS). In view, the Middle East, Israel.

Since 1758, when our species was given the moniker Homo sapiens, we have learned a great deal more about ourselves and our relationship to the Earth. In recent decades, science has described a planet that is a single physiological system in which rock, atmosphere, water and organisms (including human beings) co-evolve. This is a main tenet of GaiaHypothesis (now, Gaia Theory), the brainchild of British scientist Dr. James Lovelock.

Largely due to the incorporation of “Gaian concepts” discovered by scientists inspired by and/or working with Lovelock, the discipline of “Earth science” evolved into “Earth system science” during the last decade of the 20th century.

Research and modeling done by Earth system scientists and climate scientists are based on conceptualizing Earth as a single physiology.

However, this new understanding of Earth is not yet well-connected with other academic disciplines nor has it filtered into public consciousness as a unifying context. Thus, our society continues to face a barrage of modern challenges armed mostly with outdated views of how our world works and how we fit in.

As the famous Einstein saying goes, “We cannot solve our problems with the same thinking we used when we created them.” This essay proposes that we need a new view of ourselves as part of a living planet to effectively address dangerous trends that confront us and to move in sustainable directions. This view needs to be consistent with our most advanced science but also firmly connected with our humanity with appropriate metaphors. One such metaphor is “Geo sapiens” – a new label for our species meaning “Earth wise.”

Understanding Earth as a vast intermeshed system of feedback loops transcends boundaries between biology, geology, hydrology, meteorology and other disciplines. We now understand that atmospheric content, ocean salinity, our planet’s reflectivity (through cloud and ice cover, vegetative cover and more) and many other characteristics of our planet are automatically self-regulated by living processes. As our sun gradually heats up over billions of years, everything at the Earth’s surface, the atmosphere, and surprisingly deep into the lithosphere co-evolve resulting in temperatures that are much cooler today, due to these self-regulatory processes. Most minerals on Earth are only here because biological cycles and geological cycles are so enmeshed. Scientists are now considering the idea that plate tectonics was necessary for life to begin.

Importantly, such an all-encompassing view of the life of our planet must also include humanity and everything about us, including our minds, the ways we think and our behavior. Although the term “Anthropocene” has been used to recognize that human activities have dominant influence on climate and the environment, it is human thinking and behavior that underlie those activities and are truly the drivers of Earth’s physiology today. This view of the role of our minds and behavior as part of nature compels us to take responsibility for our actions. Thinking and behaving as if growth for its own sake is a sign of success, for instance, while perfectly “natural,” could lead to our demise. Alternatively, defining success based on our relationship with living systems could lead to sustainability.

What’s in a Name? And WhyIt Matters.

James Lovelock first developed his ideas of a planet as a single physiology while working with NASA in the 1960’s to determine whether or not there was life on Mars. He concluded there was no life on Mars, but came to the conclusion that life was not likely to persist on any planet unless as part of a living system as a whole. He began to see that the atmosphere, water, rock and organisms on our own planet did form that kind of a living system.

When Lovelock returned to England, one of his neighbors was William Golding, author of “Lord of the Flies.”Golding thought Lovelock’s ideas about the Earth were tremendously powerful and suggested that the hypothesis of a living planet be named “Gaia” after theGreek goddess of the Earth. Golding thought this would honor the fact that western science was rediscovering what western ancestors had known at a mythic level for thousands of years.

The title and metaphor “Gaia” immediately became popular, especially among people with spiritual and environmental interests. In part because of “new-age”connotations the term seemed to carry, many scientists either rejected or never took a close look at the science. Even though most of the science eventually proved to be true and is now part of Earth System Science, the metaphor has largely been divorced from the science. This is unfortunate, for we need ways to bring the science of the Earth as a living system out of its academic silo and link it not only to other disciplines but to our humanity – the ways we think and behave. Metaphors can gather public interest, make connections between world traditions and science, and draw attention to our common need to create sustainability.

“Gaia” needs to find a second and more profound life as a metaphor to guide our society during the coming decades.But another way to express “Gaia” is with the word “Geo” for both are theGreek goddess of the Earth. In the18th century, when the discipline of“Geology” was named, western culture was in the midst of a “Greek revival” in which the wisdom of ancient Greece was being rediscovered. James Hutton, the 18th century “Father of Geology,”was a physician whose interest in geology was his way of understanding the physiology of Earth!

The Special Relevance of Living Earth Metaphors to Renewable Energy

Scientifically, the sun is central to life on Earth. Photosynthesis is basic, of course, but the story goes deeper than simply our reliance on this metabolic pathway. James Lovelock described the evolution of photosynthesis as the “birth of Gaia”– that is, the birth of a living system. Life in the form of bacteria existed on Earth before photosynthesis, but relied on the high energy molecules that resulted from stored solar energy. This “primordial soup” would have been used up and even bacterial life would have disappeared were it not for photosynthesis, which linked the life of our planet to the sun’s energy in a renewable way. Longterm life on a planet depends on a system inherently and seamlessly connected to renewable energy.

The sun, our energetic source of life could have also been our destruction early in the history of our planet were it not for a co-evolved response to the sun’s inexorable warming by all parts of the Gaian system. This co-evolution produced changes in our planet’s albedo(reflectivity of sunlight), sequestered atmospheric carbon into rock, water, soil and organisms, and otherwise resulted in physiological changes that kept planetary temperatures much cooler than would have otherwise been the case. In addition, free oxygen produced by photosynthesis “scavenged” hydrogen in the atmosphere, tying it up as water vapor and not allowing this lightest element to escape to outer space. With out this aspect of the Earth’s physiology, oceans may not have persisted on Earth even with cooler temperatures.

The sun is, thus, not only the source of most of human and non-human energy, it is central to the very physiology of our planet. Even those aspects of sustainability that don’t seem to relate to renewable energy really do!

Preservation of healthy, fertile soil, forests, marshes and all other “living tissues” of the Earth is much more significant than just as habitat for biodiversity (as important as that is). It is also the only way that the physiology of our planet can be maintained in away that enables human life. The sun’s energy courses through all of these systems and is central to sustainable agricultural practices, water systems, resource use and more.

In short, we need ways to communicate and plan in systemic ways that capture the full scientific reality of our being apart of a living planet and to do so in metaphoric terms that connect to our humanity and reveal the sun as central to our existence. I am proposing “Geo sapiens” as a wise way to spur our thinking in these directions.

How Can We Nurture This Mindset?

The first challenge is in coming to a consensus as to the need to think scientifically and metaphorically simultaneously. For scientific/technically minded people (such as many in the renewable energy field), this might first mean recognizing the scientific validity of a living planet. For those who are already knowledgeable and/or convinced of this, it might help to know that “Gaian” thought contributed hugely to Earth system science and modeling. Once the scientific validity of the Earth as a living system is embraced, it can become part of widespread efforts to communicate about its changes. For this, the use of metaphors is crucial, and I believe that “Geo sapiens” is a good place to start.

The use of the phrase “Geo sapiens” as an obvious play on “Homo sapiens” can encourage us to reassess who we are and our relationship to the Earth. The discovery that “Geo” is synonymous with “Gaia” is educational in and of itself in that it shows that metaphors are a “matter of a fact” part of science. And this nomenclature allows us to contemplate a “second Greek revival” as it were…one that allows us to revive cultural wisdom from all traditions around the world.

A 1985, a “The Far Side” cartoon depicted a dinosaur at a podium addressing a group of fellow dinosaurs. The reptile opined: “The picture’s pretty bleak, gentlemen…The world’s climates are changing, the mammals are taking over, and we all have a brain about the size of a walnut.” This cartoon’s humor and its warning lie in identifying the element of truth in ourselves. Are we limiting our own ability to address climate change and other challenges simply because of the way we think? Can we use metaphors such as “Geo sapiens” to break up the confining shells of present ways of thinking and become “Earth Wise Humans?” Renewable energy and the sun, in particular, are at the heart of the story and science of humanity’s relationship to Earth, so renewable energy advocates may bear special responsibility and realize special opportunities by advancing these new ways of thinking.

Note: For more on biology and geology co-evolution, read the Smithsonian article “Life and Rocks May Have Co-Evolved on Earth” at https://bit.ly/2VNGj3l.

Martin Ogle is the founder of Entrepreneurial Earth, LLC. He worked for 27 years as Chief Naturalist for the Northern Virginia Regional Park Authority. Mr. Ogle attained B.S. and M.S. degrees in Wildlife Science from Colorado State University and Virginia Tech, respectively. Mr. Ogle lives in Louisville, Colorado with his wife Lisa and twins, Cyrus and Linnea.