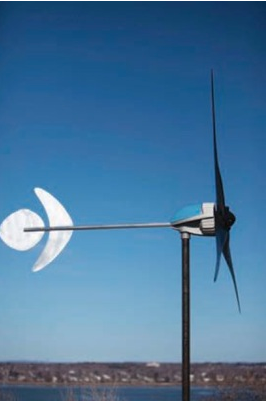 With help from NREL, Pika Energy is working to improve its injection-molded blade manufacturing process to reduce the levelized cost of energy of its 1.8-kilowatt turbine, the T701, pictured here. Photo credit: NREL 31729

Small and mid-sized wind turbine manufacturers in the United States have led the international distributed wind market in installed capacity for decades. Continued reductions in the cost of distributed wind systems are essential to successfully compete with currently economical photovoltaic systems. Annual capacity additions in 2013 were particularly low. In an effort to reduce the levelized cost of energy (LCOE) of distributed wind systems manufactured in the United States, the U.S. Department of Energy (DOE) has provided funding through the National Renewable Energy Laboratory (NREL) to support several projects.

The Competitiveness Improvement Project (CIP) is designed to improve the technology of U.S. distributed wind turbines with rotor swept areas up to 1,000 square meters (10,764 square feet) by improving turbine designs and manufacturing processes. As a result, these improvements will help lower costs, boost efficiency, and help manufacturers obtain third-party certification, such as that available from the Small Wind Certification Council. The goal of the CIP is to not only increase the number of certified wind turbines entering the domestic market, but position U.S. distributed wind turbine manufacturers to supply reliable, affordable, globally competitive technology.

In 2012, NREL released the first CIP request for proposal, followed by a second in 2013. The second RFP expanded funding opportunities to include prototype and certification testing, in addition to providing opportunities for component or manufacturing process improvements. Under both solicitations, potential awardees were required to show strong evidence of expected success for the proposed effort, expected reduction in turbine LCOE, and a viable plan to achieve turbine certification. Awardees were also required to cost-share the total project cost with NREL. Cost requirements ranged from 20 to 50 percent, depending on the topic area. The expected period of performance was 18 months.

During the first round, NREL funded Pika Energy to improve its injection-molded blade manufacturing process to reduce the LCOE of its 1.8-kilowatt turbine, the T701. NREL also funded Bergey Windpower Company to evaluate its Excel 10 wind turbine, which resulted in a decision to change the turbine to a stall-regulated design with improved airfoils. In combination with other upgrades, Bergey’s redesign is expected to result in a significant LCOE reduction.

The second round of proposals resulted in the selection of five more projects, covering the full range of CIP topics: Endurance Wind Power for prototype testing, Urban Green Energy for certification testing, Northern Power Systems for component improvements, and Pika for both component and
manufacturing process improvements.

To date, Pika has completed its Round 1 CIP subcontracted effort. All other CIP awardees are in different stages of completing their contracted efforts. It is anticipated that by the end of 2015, the six remaining projects will be completed.

The success of the CIP has benefitted the domestic distributed wind industry, according to Jennifer Jenkins, executive director of the Distributed Wind Energy Association. “I am very pleased with the progress the CIP program has had in supporting the expansion and deployment of small wind projects here in the United States,” Jenkins said. “Our industry is at a critical juncture and this program is helping to provide the stability needed for continued growth.”

In addition to the CIP, NREL has committed DOE Wind Program resources to other projects supporting the distributed wind sector.

Most recently, NREL released the “Community Wind Handbook,” which focuses on providing guidance on siting and other activities related to small community wind projects (access the handbook at bit.ly/1rjxdlx).

NREL has also developed a model of the future market diffusion of distributed wind generators, based on economics and associated consumer-purchasing behavior. With a carefully selected matrix of input assumptions for future conditions, NREL will learn what the key drivers, threshold values, and possible range of market sizes are out to 2050.

Finally, NREL continues to make progress on its distributed wind Jobs and Economic Development Impact (JEDI) model, which is expected to be available in early 2015. JEDI is a user-friendly tool that can be used to estimate the economic impacts of constructing and operating power-generation projects.

DOE’s Wind Program goal is to accelerate widespread deployment of clean, affordable, reliable, and domestic wind power to promote national security, economic growth, and environmental quality. A targeted outcome is increasing the U.S. installed wind capacity over the next 16 years to 300 gigawatts by 2030. CIP, along with other NREL programs, continues to contribute to the effort toward reaching this outcome and securing a strong position within the international distributed wind market.

Karin Sinclair is a senior project leader at the National Renewable Energy Laboratory and past chair of the ASES Wind division. Learn more about ASES technical divisions.