The Economics of Load Defection 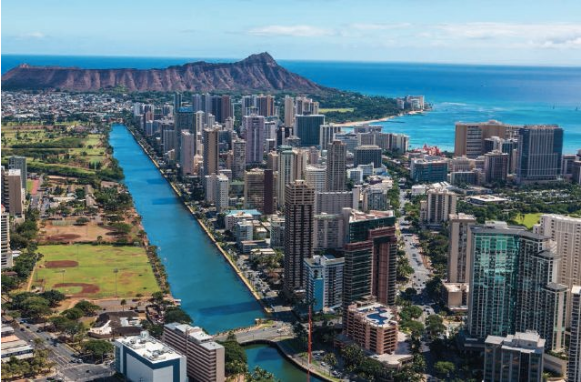 In Honolulu, Hawai’i, the excellent solar resource and high retail electricity prices mean that a solar-plus-battery-only commercial system becomes competitive with retail electricity by 2015. For Hawai’i, the economics of these systems have arrived more quickly than the required turnkey, scalable business models that can make their use widespread.

When Greentech Media published its annually updated list of cleantech buzzwords in December 2014, it included “grid defection.” Rocky Mountain Institute’s (RMI’s) February 2014 analysis The Economics of Grid Defection (rmi.org/electricity_grid_defection) was a central piece of that conversation.

It was the first comprehensive and publicly available analysis on the subject, and in the months that followed, a number of financial institutions—including Barclays, Citigroup, Morgan Stanley, and Goldman Sachs, among others—came to similar conclusions. In the face of declining costs for solar photovoltaics (PV) and batteries, current utility business models will face serious challenges.

RMI and our partners found that in the coming years and decades—and certainly within the economic life of new investments in conventional generation—large numbers of residential and commercial customers alike will find it economical to defect from their utilities and the electricity grid and supply themselves with power from solar-plus-battery systems. This finding foretold a future in which customers have a choice to either cost-effectively self-generate without the grid or be a traditional customer with the grid.

But we said then and we’ll say again now—just because grid defection may become an economic option doesn’t mean customers will actually choose to cut the cord with their utility. And there are plenty of reasons why doing so would be a suboptimal outcome.

So in our latest report, The Economics of Load Defection,(rmi.org/electricity_load_defection), we focused our analysis on a much more likely scenario that could represent an even greater challenge, namely customer economics for grid-connected solar-plus-battery systems. Such systems would benefit from grid resources, so they could be more optimally sized—smaller, less expensive, economic for more customers sooner in more places, and adopted faster.

One of the key questions the report addresses is how system configurations and economics would evolve over time when grid-connected customers have the option to source their entire load from a) the grid, b) a solar-plus-battery system, or c) some combination of the grid, solar PV, and batteries. The report evaluates the economics through 2050 for a median commercial and residential customer in five representative U.S. locations—Honolulu, Hawai’i; Los Angeles, California; Louisville, Kentucky; San Antonio, Texas; and Westchester, New York. Here’s a synopsis of our findings.

New customers will find solar-plus-battery systems most economic in three of our five geographies—Honolulu, Hawai’i; Westchester, New York; and Los Angeles, California—within the next 10 to 15 years. Solar-plus-battery systems already appeal to early-adopter residential customers, especially in places such as the Northeast 0% where the memory of blackouts after storms like Hurricane Sandy are still fresh.

Eventually, solar PV can economically supplant the grid, supplying most of a customer’s electricity. Over time, as retail electricity prices from the grid increase and solar and battery costs 0% decrease, customers logically reduce their grid purchases until the grid takes a backup-only role.

Potentially large kilowatt-hour (kWh) defection could undermine revenue for grid investment under current rate structure and business models. Our analysis shows that grid-connected solar-plus-battery systems become economic for large numbers of customers, and those systems have the potential to supply greater and greater portions of customers’ electricity.

Assuming customer adoption follows optimal economics, the magnitude of load defection from the grid is large. In a few places, customers are already investing in solar-plus-battery systems for their 100% per kWh energy charge savings alone, displacing pricier grid-purchased electricity with cheaper power produced with on-site solar-plus-battery systems. Hawai’i—where retail electricity prices are the highest of any U.S. state—has positive economics for this today.

We also found that fixed charges or the elimination of net metering don’t “fix” the problem. Our findings suggest that eliminating net metering merely delays utility load erosion. Fixed charges have a similar effect. As with the elimination of net metering, residential fixed charges would likely delay the economics for grid-connected solar and solar-plus-battery systems. Importantly though, both of these changes would only represent short-term “fixes,” and—in the long run—this will make more drastic choices, such as complete defection, relatively more attractive.

In addition, we found that investing in their lowest-cost option for electric service through grid-connected solar and solar-plus-battery systems can effectively cap customers’ electricity costs. No matter how expensive retail electricity prices get in the future, the levelized cost for grid-connected solar and solar-plus-battery systems keeps customers’ bills at or below a “peak price,” in some cases yielding a significant savings on their monthly utility bill.

Although potential implications for utilities, third-party solar and battery providers, financiers/investors, and other electricity system stakeholders are profound, customer adoption of these systems also presents a number of opportunities. The grid-connected customers of this analysis crucially do maintain their grid connection, assuming that potential fixed charges and other changes to retail electricity rate structures don’t become so onerous as to encourage customer grid defection. This means that although they could represent significant load loss, customers’ grid-connected solar-plus-battery systems can potentially provide benefits, services, and values back to the grid, especially if those value flows are monetized with new rate structures, business models, and regulatory frameworks.

For example, for distribution grid operators (such as wires-only utilities), customers with solar and battery systems should be able to provide value to the grid through upgrade deferrals, congestion relief, and ancillary services. However, new pricing, regulatory, and business models need to emerge and mature to capitalize fully on these opportunities.

For owners and operators of central generation and transmission (such as independent power producers and merchant power plants), our analysis suggests that solar-plus-battery systems will accelerate the decline of sales from central generation, reduce peak price spikes in deregulated markets, and encroach on markets for ancillary services. There is also a risk of stranded assets—existing assets still within their economic life and cost recovery period will serve a smaller and smaller remaining load, requiring price increases to cover costs and returns.

For vertically-integrated utilities, these systems will strain current business models, and adjustments will be necessary to fully capitalize on the rising adoption of solar PV and batteries. Distribution utilities whose revenue depends on volumetric sales of electricity (e.g., that are not decoupled) will likely face similar challenges.

The Fork in the Road

The electricity system is at a metaphorical fork in the road. Down one path are pricing structures, business models, and regulatory environments that do not provide customers with proper incentives to invest in a way that can work with the electricity system as a whole. This can be a self-reinforcing path—distributed investments that favor individual customers and reduce their grid dependence can increase overall costs for remaining grid-dependent customers, making solar-plus-batteries more attractive still. Ultimately, we worry that this path could lead to resistance to these technologies from established industry participants, and make the economics for complete defection more compelling for customers.

Alternatively, pricing structures, business models, and regulatory environments implemented today or in the near future that appropriately value the grid benefits of solar and solar- plus-battery technologies as part of an integrated grid can lead the system down another path. Solar PV and batteries, with the proper incentives, can potentially lower system-wide costs while contributing to the foundation of a reliable, resilient, affordable, low-carbon grid.

These two pathways are not set in stone, and there is some room to navigate within their boundaries. But decisions made today will set us on a trajectory from which it will be more difficult to course correct in the future. We firmly believe that early and proactive action that appropriately values solar-plus-battery systems (and other distributed energy resources) and allows them to contribute to grid services will lead to a lower-cost, cleaner, and more reliable electricity system.

Editor’s Note: This article is reprinted with permission from the Rocky Mountain Institute (RMI). It is an edited version of a blog post (bit.ly/1ILG3S6) about RMI’s recent report, The Economics of Load Defection: How Grid-Connected Solar-Plus-Battery Systems Will Compete With Traditional Electric Service, Why It Matters, and Possible Paths Forward. The full report is available as a free download at rmi.org/electricity_load_defection. The study on which the report is based is the work of RMI, HOMER Energy, The Butler Firm, and global