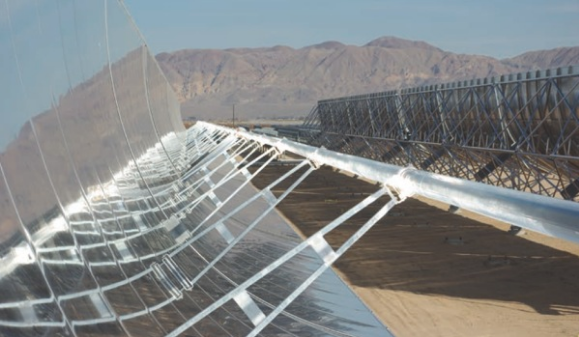 The question is “can Mississippi achieve such reductions?” The answer is emphatically “yes”!

More than 50% of the new electricity generation installed in the United States in the first quarter of 2014 was from renewable sources, and 30% was from solar alone. Jackson, Mississippi, ranks 13th in the country in terms of solar radiation, with an average of 5.1 kilowatt-hours per square meter per day. States with more solar installations, such as New Jersey (Newark—4.5), Massachusetts (Boston—4.6), Illinois (Chicago—4.4), and portions of Texas (Houston—4.8) have a less robust solar resource than Mississippi.

It’s time for Mississippi to catch up with the rest of the nation. There is significant public interest in generating more of the state’s electricity with solar energy. But how can we get there?

A promising strategy is to have Mississippi develop hybrid concentrating solar power (CSP) and natural gas (NG) power plants. The best example of such a plant is Florida Power & Light’s (FPL’s) combined CSP and NG facility at its 75-megawatt (MW) Martin Next Generation Solar Energy Center located north of West Palm Beach. The installation covers 500 acres and uses 190,000 mirrors to generate enough electricity for about 11,000 homes. The CSP plant is coupled with an adjacent NG-fired plant that can produce about 3,800 MW of power. CSP provides heat to generate electricity during the day and NG is used at night.

This approach would allow Mississippi utilities to achieve the carbon reductions required by the EPA Clean Energy Plan, and FPL has already demonstrated the feasibility, cost effectiveness, and reliability of this hybrid plant configuration.

Here’s how it works. A CSP collector field consists of multiple rows of parabolic trough mirror collectors positioned on a north-south, horizontal axis. The parabolic troughs focus the sun’s energy on a central tube containing a high-capacity thermal fluid. A series of pipes transfer the thermal fluid to water heaters, where it is used to generate high-pressure, superheated steam. The steam is then used to turn conventional steam turbines, which generate electricity. The heat can also be stored for future use. The thermal fluid is recirculated through the parabolic trough system to gather heat again and again.

The parabolic mirrors focus or “concentrate” solar radiation onto receiver pipes located at the focus of the parabola, ensuring continuous absorption throughout the day. Because of their parabolic shape, troughs can focus 30 to 100 times the sun’s normal intensity, resulting in operating temperatures of 750°F to 1,000°F. This is equivalent to the heat generated by burning NG to create steam to turn electric generator turbines.

CSP power plants avoid the high and unpredictable costs of fuel, so developers and investors can focus on the capital cost of installation and operation and maintenance. Various studies have found that average electricity costs for new standalone CSP plants with energy storage currently under construction range between $0.12 per kilowatt-hour (/kWh) and $0.22/kWh, depending on location. This data shows that CSP is already cost competitive with NG-fired plants.

Land requirements are roughly 4 to 5 acres per MW. For example, a 582-MW facility (the size of the new Kemper Power Plant in Choctaw County, Mississippi) would require only approximately 2,910 acres in contrast to the 12,000 acres required for Kemper’s associated lignite mine alone (and not including the acreage needed for the cooling loop). Future costs for CSP systems, as technologies improve, could be as low as $0.04 to $0.06/kWh for complete, standalone CSP trough plants.

However, when CSP plant components are coupled with existing NG plants, costs are substantially lower because energy storage is not required and the steam-generating unit already exists. Combined CSP/NG plants will not result in increased electricity rates, because new CSP component costs are offset by reduced NG fuel costs.

Mississippi currently has 12 NG-fired power plants that sit idle 85% of the time. These plants could provide up to 7,993 MW of power. Coupling CSP to these units would enhance electricity production while protecting against price increases of NG and extending NG supplies.

Statistics from the U.S. Department of Energy (DOE) corroborate these cost estimates by listing current CSP power costs for electricity at about $0.13 to $0.17/kWh. The average cost in 2014 for residential electrical power in Mississippi is $0.116/kWh, according to the U.S. Energy Information Agency, up 7% from 2013 costs. Power costs for solar systems are anticipated to decrease over time as new advances are made, while costs for power generated from coal, NG, and nuclear are anticipated to increase year over year. In addition, DOE projects that advanced energy storage strategies could economically store solar heat for use at night and during periods of low insolation.

DOE studies also show that new CSP plants with storage under construction now could produce electricity at costs comparable to NG-fired plants. Moreover, fossil and nuclear technologies have costs that are unaccounted for in our present economic models, such as carbon emissions, air pollution, land and water degradation from mining, safety and security risks posed by commercial reactors, risks from nuclear weapons proliferation, and the dangerous legacy of radio-active waste. These costs should be accounted for in the price of these technologies before making price comparisons.

A 2004 Energy Foundation report concluded that in the next two decades with current technology, solar photovoltaics (PV) could provide Mississippi with 27 million megawatt-hours per year—about 59% of Mississippi’s annual electricity consumption. This is a low estimate, because it uses a modest value for Mississippi’s hours of sunshine and only includes the available residential and commercial roof space. Using the available space from parking lots, awnings, windows, highway medians, and industrial buildings would further increase the amount of potential electricity generated from solar in Mississippi. The overwhelming majority of solar panels can and would be built into existing buildings and infrastructure, and would not take up any additional land. Costs for such PV installations would not be borne by the electrical utilities, so electricity rates would not increase to supply the additional generation.

Two reports released September 2014 by the International Energy Agency (IEA) state that by the year 2050, solar could eclipse fossil fuels, hydro, wind, and nuclear as the world’s most widely used source of electricity generation. According to the IEA, “solar PV could conceivably be used to generate as much as 16% of the world’s electricity needs by mid-century, with solar thermal electricity generated by concentrating solar plants…accounting for another 11%.”

The second report, Technology Roadmap: Solar Thermal Electricity (bit.ly/1b0hN49), stresses the ability of CSP to store thermal energy and provide necessary backup power during periods of peak loads, on cloudy days, and overnight. Currently, the sum total of global CSP deployment is 4 gigawatts (GW), but the report projects that if 1,000 GW of CSP capacity was installed by 2050, 2.1 billion tons of CO2 emissions could be avoided every year. The reports state that when combined, PV and CSP could cut annual CO2 emissions by more than 6 billion tons—effectively equaling the current output of worldwide transportation emissions and exceed- ing all CO2 emissions produced in the United States today.

In order for Mississippi to participate in this solar boom, the state needs to adopt aggressive measures to encourage the installation of PV systems, such as those enacted in Louisiana, Florida, South Carolina, Tennessee, Texas, etc. How?

With Mississippi’s interconnected grid, slow rate of projected growth in electricity demand (less than 1% per year), and idle NG-fired plants, the state can play a significant role in meeting the Clean Energy Plan requirements and offsetting the retirement of Mississippi’s aging coal-fired power plants if needed. Taking advantage of existing NG power plants in Mississippi and converting them to combined CSP/NG plants will help meet the requirements of the new Clean Energy Plan while keeping electricity rates at current affordable levels.

The Mississippi Department of Environmental Quality (MDEQ) is reviewing the Clean Energy Plan and the goal for CO2 emission reductions proposed for Mississippi under the plan. Although the MDEQ is contesting the percent reduction of carbon that EPA has specified for the state, the MDEQ could evaluate the opportunity for combined CSP/NG power plants in Mississippi to be key to achieving the final goal for carbon reductions. Whatever level of CO2 reductions the MDEQ determines is appropriate for Mississippi, solar energy can play a major role in achieving the goal.