It’s a mature technology, first invented by Alexandre-Edmond Becquerel in 1839 and initially commercialized at Bell Labs in the 1950s.

For residential application, PV falls into two main categories. First is grid-tied, where the home generates its own electricity but can also draw power from the utility company at night. The second is off-grid, where the home is located too far from an electrical utility cable and the home must generate its own power, storing energy in batteries for use at night. 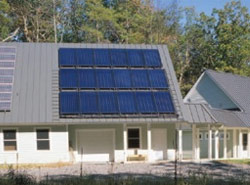 A basic home PV system consists of PV cells connected and packaged together in weather-protected modules, which are fastened side-by-side on a racking system to form an array. The PV modules produce direct current (DC), which in a grid-tied system flows to a grid-interactive inverter. An inverter changes DC voltage to the alternating current (AC) for the household electric circuit powering wall outlets and all AC appliances.

Excess power from the inverter may flow out of the house through the utility company’s electric meter, into the city-wide grid. When this happens, the meter may run backward, and the utility will credit the outflowing electricity against electricity purchased from the grid at other times, like at night. This process is called net-metering.

In an off-grid system, DC power flows from the modules through a charge controller (also called a regulator), which is an electronic device that produces a smooth flow of current at the desired voltage. From the charge controller, the power can go to a set of storage batteries and then on to the inverter, as needed.

Learn more about Efficient Homes, Photovoltaics and Home, or the Solar Home Tour.

What are PV cells made of, and how?

Crystalline PV cells use silicon, a little bit of boron and phosphorus along with anti-reflection materials and a screen printing of electrically conductive grid lines on the top and a coating of aluminum on the bottom to collect the electrons. The cells are made by liquefying the silicon (derived from pure sand) at high temperatures, and then slowly cooling the material in a way that makes large crystals. For single crystals, a cylindrical boule is very slowly pulled from the molten silicon. Polycrystals are cooled in a block formed by quartz glass, making grains of crystals as large as possible. The solid materials are sawed into very thin wafers, to produce the individual cells.

Thin-film modules are made from very thin layers deposited on an electrical conducting surface. These materials may originate as silane gas for amorphous silicon, cadmium and tellurium for CdTe, or copper, indium, gallium and selenium for CIGS. The deposition techniques may include sputtering, co-evaporation in a vacuum, electro-deposition, sintering or other techniques. Many variations of thin-film materials are being investigated for low-cost manufacturing and higher solar-to-electrical efficiencies. 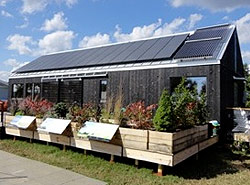 Location is critical to PV performance. The array should face the sun. This usually means due south, though if you have a heavy air-conditioning load in the late afternoon you may want to point the array southwest. The array should not be shaded during any part of its productive day. The array should be tilted upward at the correct angle to optimize seasonal exposure — typically at the angle of your latitude so it gets sunlight at a right angle at the spring and fall equinoxes. Some arrays can be made adjustable for varying the angle at different seasons. If the array needs to be elevated above the roof surface, it places additional uplifting loads on the roof structure during wind storms. If the roof doesn’t offer a suitable structural surface, consider a ground-mount array in the yard, or a solar pergola like the one at right.

Some newer grid-tied systems replace a large central inverter with several microinverters, individually attached to the back of each PV module. Power coming off the module/inverter combination is 230 volts AC and can tie directly to the household service panel. A major advantage is that if one module is shaded or broken, performance of the rest of the system is unaffected. You can monitor the performance of each individual panel, on a home computer or your smart phone. DC to DC optimizers are also now available, which help to optimize the power from a string of PV modules, but do not convert to AC as inverters do.

A 3-kilowatt (kW) inverter can’t handle the power produced by a 5-kW DC array. If you install a 3-kWarray, you may consider putting in a 5-kW inverter to allow for expansion of the array in the future. Also be aware of economies of scale. Labor costs may be lower, per unit, for a large system. If a 5-kW system can be installed in a day, you won’t save labor costs by buying a 3-kWsystem, which may also take a day.

Electric power is measured in watts. A kilowatt (kW) is 1,000 watts, and a megawatt (MW) is 1 million watts. You buy electricity in kilowatt-hours (kWh), which is energy (as opposed to power). For instance, if you run a 100-watt light bulb for an hour, you’ve used 100 watt-hours of energy. If you run it for 10 hours, you’ve used 1 kWh, for which the average household would be billed 11 cents (at $0.11/kWh). A1-kWPVarray can produce 1 kW in direct sun. If sunlight falls on it five hours a day, it may produce 5 kWh that day.

If your family uses 600 kWh of electricity each month, that works out to about 20 kWh per day. If you get an average of five hours of direct sunlight daily, you’d balance your electric use with about 4 kW of net-metered PV power. A 2-kW system would offset about 50 percent of your bill.

A web-based monitoring system tells you how much power you’re making from each individual module, moment to moment and logged hourly, daily, weekly, monthly and annually. It can tell you precisely how much your system saves on the power bill.

Modules are tough, and usually carry a 20- to 25-year warranty. They need to be cleaned occasionally, which is usually a matter of hosing off dust and leaves. If appropriate, consider how you’ll clear snow off the modules. The inverter needs to be mounted in a cool, shaded place, such as the north side of the house. Inverter life expectancy can vary 10 to 15 years. 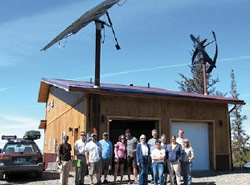 If you live far from the main road, it may be too expensive to run a power line in from a utility pole. In that case you’ll need to generate your own solar electricity and store it in a bank of batteries for use at night. Off-grid homes use heavy-duty deep-cycle batteries, similar to the batteries used in fork-lift trucks.

Batteries are charged with DC from a charge controller, which can take power directly from a PV array. Power taken off the battery goes to the inverter for household use.

If you live on the grid, a battery storage system is usually unnecessary. It can, however, substitute for a backup generator, assuring you’ll have power during any utility company outages. That means your small business can have reliable refrigeration in hot-weather brown-outs, and you can operate a fan-driven natural gas furnace when an ice storm takes out electrical power lines.

Learn more about Efficient Homes, Photovoltaics and Home, or the Solar Home Tour.

This article is adapted from the Solar Energy Resource Guide 2008, published by the NorCal Solar Energy Association, a chapter of the American Solar Energy Society.  Joseph McCabe, P.E., is an ASES Fellow and Lifetime ASES member. Contact him at energyideas@gmail.com.