Hitting the Trail with the Sun Behind Us 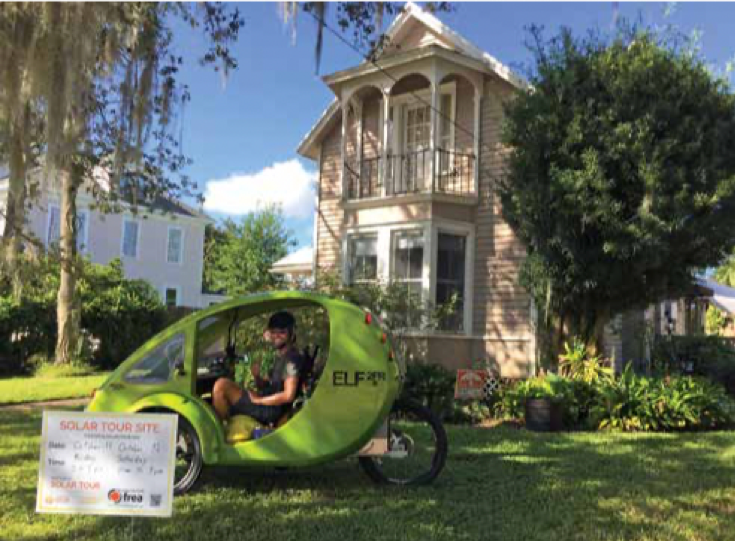 The tour ended at a 1903 home, owned by FREA President (and ELF rider) Bill Young.

On October 11, 2019, a group of people gathered at the new Welcome Center for the start of the first solar tour by bicycle in the historic downtown district of Titusville, Florida. Titusville is located on the Indian River across from Kennedy Space Center. Creation of this bicycle tour brought together several themes, showcasing local examples of renewable energy for sustainability, past and present, and was targeted for people interested in healthy living. Florida Renewable Energy Association (FREA) and local volunteers organized the tour as part of the 24th National Solar Tour, directed by American Solar Energy Society (ASES) and SolarUnited Neighbors (SUN). FREA partnered with the Coast-to-Coast Bicycle Company, an ideal location due to its inclusion in the Florida Department of Transportation’s system of ‘Greenways and Trails’ program.

The uniqueness of this solar tour lay in the combined experience of history, solar applications and transportation. Three walking and biking trails are routed across the state, converging in Titusville; one of them runs along the entire east coast of the country from Key West, Florida to Maine. As the bicycle riders followed the tour route through the historic district of Titusville, they saw and learned about the transition of energy sources and how their community was shaped by events of the time.

Titusville was founded in 1867 at the height of the Industrial Revolution in North America. In 1890, this small town of just over two hundred people obtained an Edison steam generator to produce electricity. The electric plant burned wood and operated from dusk to 9 pm each day, powering only the city, as rural electrification did not start until the 1920s. Florida Power and Light (FPL) purchased the city electric plant in 1926 and replaced the direct current (DC) generator with an alternating current (AC) generator, as the rural electrification program expanded across the country.

Solar thermal (hot water) systems were first patented and manufactured in Baltimore, Maryland in 1891 under the name “Climax.” People across the country were relieved not to have to chop wood or shovel coal in order to heat water. In 1923, a Miami real estate tycoon built a factory to make solar thermal systems for distribution in Miami and throughout Florida.

As transportation advanced from horse and buggy, mobility became more and more accessible with the introduction of paddle-wheel steamships, locomotive trains, bicycles, automobiles and airplanes. By 1914, electric vehicles (EVs) had gained widespread use, and Henry Ford’s wife drove one at their summer home in Florida.

The modern bicycle was developed in the 1860s with the invention of the Velocipede and by 1945, people were riding bikes for fun and exercise in what was called ‘cyclotouring.’ Today, bike clubs, exercise activities and touring events are becoming more and more popular, as bikes are used as an environmentally inclined method of transportation. The FREA Solar Tour by Bike was about education as well as exercise.

Charles Fritts assembled the first photovoltaic (solar electric) array in 1884 in New York City. By 1954, Bell Labs changed solar cell material from selenium to silicon for greater efficiency and use in powering remote communications. America’s entrance into the space race brought photovoltaics (PV) to Cape Canaveral Air Force Station for powering satellites in the rigors of space, such as the Vanguard in 1958. The space program’s growing need for transportation on the moon produced an electric vehicle called the Lunar Rover, launched on Apollo 15 in 1971.

The tour included nine locations. The group stopped at each site to view installations and hear a lecture on history, solar technology and energy efficiency applications.

What better way to kick off the solar tour by bike than at the Coast-to-Coast Bicycle Company housed at the new Welcome Center built in 2017? A 5.2 kilowatt (kW) grid-tied PV system was installed, as the city developed an energy sustainability program, reducing the city’s electric load and powering an electric vehicle charger for the community.

The first historic home on the tour was built in 1894 and is seen in the accompanying photo taken in 1937. Note the residential solar hot water system on the roof, which was located over the kitchen, check them out here. Current owners supplied the picture and believe the system was removed after a fire in 1953. The North Brevard Historical Society had anecdotal information that eleven homes along Indian River Avenue had solar hot water in the early part of the 1900’s. What a luxury for the time, as solar hot water meant that you did not have to chop wood to make a fire to heat water for the Saturday night bath!

The next home on the tour was modernized with new construction and included the addition of a swimming pool with a solar water heating system to extend the swimming season in Florida. Most of the solar systems in Titusville are swimming pool heaters, which add about 18 degrees Fahrenheit to the temperature of the water. The design of swimming pool heaters is different from residential solar hot water systems. The pool system consists of a thin plastic tube collector, usually connected to a pump to circulate heated water throughout the pool. The concept of heated pools actually began with the Romans in 100 AD.

The next stop showcased a home built in 1960 during the growth of the town due to the missile and space programs. Kennedy Space Center’s Vehicle Assembly Building and several launch pads can be seen from the home. A 6 kW grid-tied PV system was installed in 2017, as this homeowner participated in the Solar United Neighbors Brevard County Solar Co-op.

Two Sears kit houses built in the 1920s were included on the tour, in which one home had both PV and solar hot water. A swimming pool was added 10 years ago that included installation of a solar thermal system to their shed to warm the pool. Two years ago, a 9 kW grid-tied PV system was added to the home in an effort to reduce electric bills, as the cost of PV electricity became lower than the utility. The other homeowners’ dock and dock utility power lines were damaged during Hurricane Dorian in 2019. They repaired the dock and changed the electrical supply to PV. They added a stand- alone PV system to the roof of the dock shed to power lighting and small electronic entertainment devices. The PV system includes batteries for nighttime operation, enhancing entertainment on the dock.

After an exciting hour of riding our bikes from site to site, we ended the tour at our home, built in 1903. The house was built before air conditioning, so tallceilings on the first floor had double- hung windows that allowed air flow, creating a chimney effect to the second floor. The building has a raised floor crawl space above the ground and unique roof vents for additional air flow. Originally, a water tower in the back yard collected rain water from the roof, and well water was obtained from a mechanical windmill. The house was built three blocks from the city electric utility, which powered the home’s lighting. Blocks of ice were supplied by the city ice house powered by the city electric utility for ice boxes, as modern refrigerators were not available.

Following Hurricane Charley in 2004, a 700-watt standalone PV system with 1.5 kilowatt-hour (kWh) battery pack was added to power critical items, such as the refrigerator, lights and fans. In 2010, a new roof with historically designed metal shingles was installed on the front of the home with standing seam on the back. The standing seam allowed PV and solar hot water to be added without making holes through the roof. The modern solar thermal water system features a PV module to power the water pump to circulate the water through the solar collector during power outages. In 2011, a 2.6 kW grid-tied PV system was added to realize lower electric bills through net metering and to take advantage of state rebates. In 2018, the SMA inverter was upgraded to an inverter with Secure Power Supply so the home can have as much as 1800 watts of emergency power during power outages.

A Clipper Creek electric vehicle charger is connected to the main power panel for ease of level 2 charging of two plug-in hybrid cars. This added load offset some of the cost savings of the grid-tied system, but gave us ‘free’ fuel for the cars. A spare inverter is on hand to tap into our hybrid electric vehicle batteries during power outages.

Since the 1800s, the industrial revolution has touched every aspect of our lives. With these impacts came increased use of energy sources, such as wood, wind, solar, coal, natural gas and oil. The Solar Tour by Bike through the Titusville historic district showed the interaction of old and new energy technology and early development in the market place. As technology advanced, the market changed and energy sources changed with the times. Before the 1900s, passive building design was common, and wood and wind were major energy sources. Coal and oil joined the mix, followed by modern renewable energy sources. Production, distribution and use of electricity generated by multiple energy sources has changed the world.