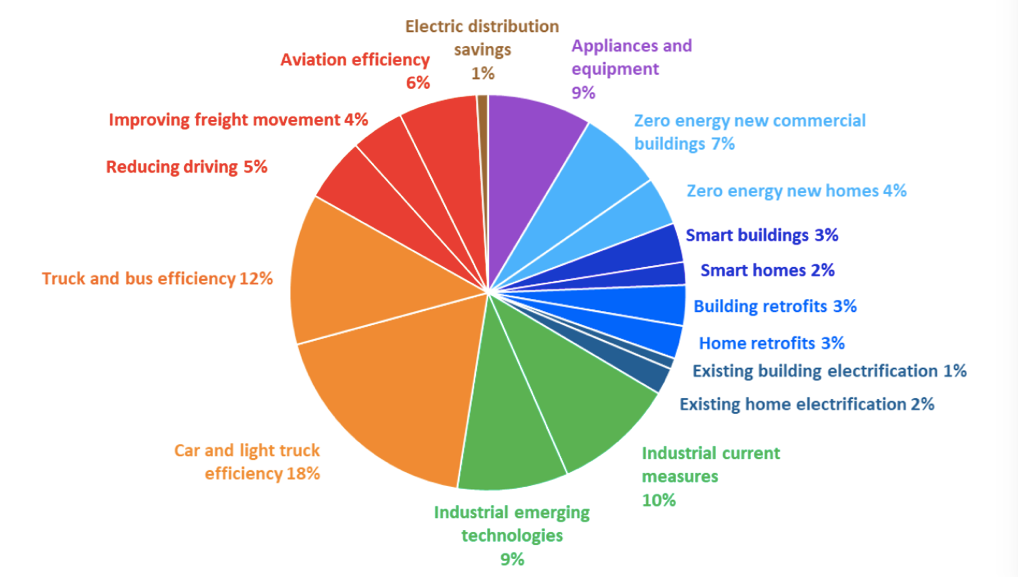 ACEEE estimated greenhouse gas reductions associated with categories of energy-efficiency measures. Assumptions about the energy resources affected impact resulting greenhouse gas reductions, for example, indicating outsized reductions for improvements in the transportation sector. Improvements in appliances and equipment have relatively less direct impact on meeting climate targets, but savings in that category can turn public opinion about the benefits of overall support for a clean energy transition. (ACEEE 2019)

According to a recent report from the American Council for an Energy-Efficient Economy (ACEEE), a range of energy efficiency strategies could cut U.S. greenhouse gas emissions projected for 2050 by about half. The International Renewable Energy Agency (IRENA) has reported similar findings for the U.S. and other industrialized countries, while underscoring that energy efficiency and renewables are indeed better together. It concluded, “Both renewable energy and energy efficiency offer roughly the same amount of mitigation potential … but only when working in synergy.” In other words, in the race to renewables, energy-efficiency policies determine both where to draw the starting line and to some extent, how many rocks will be left on the road.

Specific recommendations for increasing energy efficiency and for combining efficiency with renewables differ from nation to nation and state to state. In all, the opportunities are almost countless on both the supply-side (improving energy development, generation and delivery systems) and on the demand-side (improving energy use). This led the U.S. Energy Information Administration (U.S. EIA) to project that energy intensity (the amount of energy needed per unit of economic production or GDP) should improve markedly throughout the U.S. economy, including in residential households, the commercial and industrial sectors, and transportation, between now and 2050. ACCEE and other climate watchers foresee the potential and the need to do even better.

Yet energy economics represent a complex tangle of causes and effects. When something goes wrong, such as the stalling progress in U.S. energy intensity that the EIA noted last year, the problem can be hard to solve. There are many ways to improve energy efficiency in every sector, but policymakers who are looking for a silver bullet solution sometimes say they are overwhelmed with “silver buckshot.” Or worse, they may join a growing political trend to back off clean energy policies and simply let the market run its course.

Andrew deLaski, Executive Director of the Appliance Standards Awareness Project (ASAP), describes the Trump Administration’s current opposition to advancing appliance and equipment standards as emblematic of the overall challenge that faces energy efficiency proponents today. For decades, energy efficiency standards of all kinds have provided a streamlined way to promote innovations that are good for the public and the economy.

“Appliance efficiency standards are the top U.S. policy for saving energy in buildings. They cover more than 60 categories of appliances and equipment, accounting for nearly all energy use in homes and 60% of energy use in commercial buildings,” deLaski said. “Appliance standards alone accounted for 13% of U.S. energy savings in 2015,” he added.

These savings are above and beyond the savings attributed to the U.S. EPA Energy Star program, which promotes the top third of energy-efficient products in each major category. Energy Star offers labeling and public education in collaboration with industry, achieving nearly universal (87%) brand recognition nationwide.

Federal minimum efficiency standards and verification procedures, which are the focus of ASAP’s work, are the bedrock not only for Energy Star, but for all kinds of efficiency programs and for clean electrification efforts, which must rise in sync with new renewable energy goals. The push for standards first accelerated in the late 1990s, when DOE upgraded standards for central air conditioners, clothes washers, fluorescent lighting ballasts and water heaters. The air conditioner standards alone were credited with avoiding the need for 150 new fossil-fueled power plants. Since that time, advocates have made progress against cyclical threats of rollback or delays, with some of the greatest progress during the Obama years and the worst setbacks occurring since 2017.

As of January 2020, the DOE has missed 21 legal deadlines for updating appliance standards. Further, the DOE introduced a new process rule that gives industry a stronger hand in writing new standards or encouraging their complete dismissal. The same rule would likely force advocates into costly litigation in order to introduce improvements. Dishwashers are just one category that is currently affected. Last fall, a group co-founded by the conservative Koch brothers responded to an upcoming rule with a nationwide petition to “Make Dishwashers Great Again,” claiming that energy efficiency standards have degraded dishwasher effectiveness and speed. DOE plans to issue a final dishwasher rule early this year, and efficiency proponents, who expect the worst, are already preparing to sue.

President Trump announced the rollback with a rambling commentary on compact fluorescent lamps (CFLs). In addition to his complaints about the price of these “new bulbs,” the President said, “(and) if they break it’s considered a hazardous waste site.” This exaggeration, referring to a small amount of mercury in the CFL lamps, was unwarranted, but more to the point, CFLs were already nearly gone from the market. By the first quarter of 2019, CFLs accounted for less than 5% of all light bulb sales, according to the National Electrical Manufacturers Association. Top manufacturers, including GE, had stopped making them. They are being replaced by affordable LEDs that come in an array of color tones and offer features from three-way switching to remote controls. In 2017, Energy Star partners published an early report on this remarkable market transformation, calling it “The Lighting Revolution.”

According to the ACEEE, the current rollback on lighting standards could cost U.S. consumers an extra $14 billion on energy bills annually and significantly raise energy generation needs.

While LEDs may win in the marketplace eventually, thanks to mostly to their sheer competitive superiority, other endangered products may fail to inspire. DeLaski points to high-efficiency natural gas furnaces as a particularly vulnerable category to watch this summer. “While we need clean electrification, we also need to promote the greatest efficiency possible for gas-fired equipment today,” deLaski said, adding “That’s a climate imperative in regions where natural gas is still the dominant heating fuel.”

When asked what steps clean energy supporters might take, deLaski suggested watching his website, www.appliancestandards.org, as well as those of supporting organizations, such as ACEEE, for opportunities to comment on the Federal regs. In addition, efficiency proponents can support state-level action to advance energy efficiency, from state-level appliance policies to building codes to electric vehicle (EV) infrastructure funding.

This may also be a good time for grassroots consumer action. According to the Smart Energy Consumer Collaborative, a research and consulting group supported by utilities and the clean-tech industry, nearly half of consumers nationwide now fall into one of two energy market segments that are inclined toward efficiency: Green Innovators (20%) or Tech-Savvy Protégés (25%). Another large market segment is described as the Moveable Middle (29%), because it represents people who are mostly undecided about energy-related products and behaviors. Given easy access to efficient new appliances and equipment, the majority of consumers are likely to respond.

Media watchers suggest that campaigns against energy efficiency standards are driven by these same market trends. If consumers on both sides of America’s political divide understand clean energy lifestyles as smart and abundant with choice, then partisan campaigns against all kinds of energy regulations could crumble. In short, it’s not all about the light bulb.

This author’s own recent research suggests that the prevalence of outdated information about energy efficiency creates significant vulnerabilities for those promoting more progress. For example, government agencies and non-profits often circulate decade-old brochures and use the CFL as a symbol of energy efficiency. A Google search for information on energy-efficient household lighting turns up numerous outdated images of CFL lamps and price comparisons that show LEDs priced at $10 apiece or more and looking like flashlights embedded in football helmets. This fuels erroneous statements from energy-efficiency policy opponents. Searches for information about other household equipment, such “heat pump pros and cons,” similarly turns up advice that is seven to ten years old. That was before the prevalence of new high-efficiency split systems and heat pumps that work well in more extreme climate conditions. Even solar proponents should blush to find a plethora of outdated information in wide circulation, including outdated solar cost estimates and financing options. I have worked with organizations like the American Public Power Association to update their outreach; at minimum, energy-efficiency proponents should delete outdated web content.

If energy efficiency, renewables, and related technologies are going to work together in a race to transform our energy economy, then we must anticipate accelerating cycles for updating all of our strategies and tools. That begins with regularly updating energy efficiency standards and frequently revisiting energy efficiency policies on both the supply and demand sides. It also means making sure the public knows when we are succeeding.