California Must Take Back Its Power—Literally The idea of wrestling the power grid out of the hands of private investors and making it a publicly owned utility has grown more and more appealing. 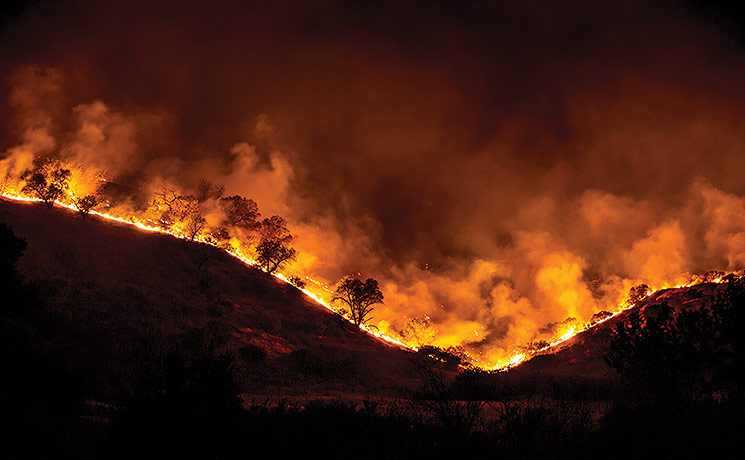 Tree ridge in flames during the Woolsey Fire, California, 2018.

We Californians are watching our state burn. Our houses are literally on fire, and yet we should not be surprised. Our current “new normal” is an utterly predictable consequence of global warming. While the climate crisis fueling our wildfires is the direct result of the fossil fuel industry’s profit-driven corporate greed, another culprit, one that has for years valued moneyed interests over human needs, is also to blame: the nation’s largest utilities company, Pacific Gas and Electric (PG&E).

The most direct example of how PG&E has caused death and destruction was 2018’s Camp Fire, which razed the retirement community of Paradise and caused 85 deaths. The state of California determined that PG&E’s transmission lines were the cause of that horrific fire, and according to Gov. Gavin Newsom, the company was guilty of “two decades of mismanagement, misconduct and failed efforts to improve a woeful safety culture.” Rather than focus on how to compensate fire victims and survivors while upgrading the power infrastructure, the company filed for bankruptcy to protect investors.

Then, earlier this year, the company attempted to pay its executives $11 million in bonuses as “incentives” to improve safety standards. A federal bankruptcy court judge later rejected the bonuses, saying, “There is simply no justification for diverting additional estate funds to incentivize them to do what they should already be doing.” PG&E has known for years that it needed to upgrade its infrastructure, yet failed to do so.

Meleiza Figueroa, a longtime political activist and environmentalist who is currently a faculty owner at the Cooperative New School for Urban Studies and Environmental Justice, explained to me in an interview that “PG&E has gotten all of these subsidies, all of these land easements from the government to build this huge infrastructure that they cannot and will not keep up.” The state’s regulatory agency, the California Public Utilities Commission, has clearly failed to hold PG&E accountable.

Now PG&E is resorting to mass power outages to protect itself from liabilities during fire season, plunging millions of Californians into darkness. In a statement, the company explained: “We understand the widespread impacts this Public Safety Power Shutoff will have across Northern and Central California. We would only take this decision for one reason—to help reduce catastrophic wildfire risk to our customers and communities.” While that may sound reasonable on the surface, it obscures PG&E’s decades- long negligence of the state’s power infrastructure—negligence in the service of maximizing shareholder profit over long-term grid resilience. Moreover, the outages themselves are dangerous, especially for vulnerable communities of disabled, elderly and low-income people, and could cost the state billions.

Figueroa pointed out that the company appears to be prioritizing higher income customers, saying that in recent weeks in Sonoma, PG&E “already cut off power to 28,000 homes around the area, but they did not turn off the high-voltage transmission lines,” which she speculated might be for “energy that is transported out of the area to more affluent regions,” and are risk factors for sparking wildfires. She made the case for transitioning to microgrids instead of a centralized power system, which she says would create a way for “people on the neighborhood level or the town level to own their own energy and generate it on site,” thus undermining the need for the high-voltage transmission lines that have sparked many fires.

Most Californians may have been shocked, during the last few fire seasons, to realize that PG&E is a private company that pays dividends to its investors when it makes profits— which come straight out of the pockets of ratepayers. It serves a majority of households in the nation’s most populous state and operates as amonopoly, reaping profits off the basic needs of Californians. The idea of wresting the power grid out of the hands of private investors and making it a publicly owned utility has now grown more appealing.

Soon after last year’s devastating Camp Fire, a campaign called Let’s Own PG&E was formed, demanding that the state refuse to bail out the company with taxpayer money. The campaign also points out how PG&E directly exacerbates our climate crisis: “PG&E’s executives and investors have resisted and lobbied against decarbonization at every turn, arguing that natural gas and coal must remain a significant part of their energy portfolio in order for them to remain profitable.” The campaign backs the idea of a Green New Deal, stating: “A public PG&E could be a cornerstone of a Green New Deal in California, which would guarantee new union jobs for hundreds of thousands of Californians to build a clean economy.” Presidential candidate and Vermont Sen. Bernie Sanders has made public ownership of utilities a critical part of his climate plan.

Sadly, California Gov. Gavin Newsom, who has been a vocal critic of PG&E, also maintains that power outages are a necessary evil to avoid wildfires andapparently wants the company to remain in private hands. He has suggested that Warren Buffett’s Berkshire Hathaway make a bid for California’s power company. But other elected officials in California are making the case for taking PG&E out of private hands. Congressman Ro Khanna, whose district includes Silicon Valley, has said, “It’s time for the state to take ownership of PG&E, and make sure that they are doing what they need to do to keep the power on and keep people safe.”

Figueroa points out that “even if the state were to take over PG&E, they would be inheriting a highly degraded, highly centralized system of power transmission that is just not going to be sustainable and will continue to be hazardous in the long run.” San Jose, the largest California city PG&E powers, has touted the idea of turning the company into a customer-owned cooperative. San Jose Mayor Sam Liccardo has emerged as a strong voice on the issue, writing that states: “We simply cannot rely upon PG&E to act in our residents’ best interests.” He explains that while “Creating a utility owned by the public—whether its customers or a municipality—will not provide a panacea to the [power outage] problem,” it will “ensure that the company that emerges from bankruptcy is not distracted by demands by investors for short-term financial performance, and better able to access capital to invest in its infrastructure.”

There is an analogy to be made with our current health care system that relies on a profit model to deliver quality medical care to all Americans. Just as people need health care, they need electricity to power their homes. And just as a growing chorus of Americans are demanding a nationalized health care system that removes investor profits from the equation, Californians are realizing the need to take back their power—pun most definitely intended.

Sonali Kolhatkar is a columnist for Truthdig. She also is the founder, host and executive producer of “Rising Up With Sonali,” a television and radio show that airs on Free Speech TV (Dish Network, DirecTV, Roku) and Pacifica stations KPFK, KPFA, and affiliates. She is the former founder, host and producer of KPFK Pacifica’s popular morning drive-time program “Uprising.”