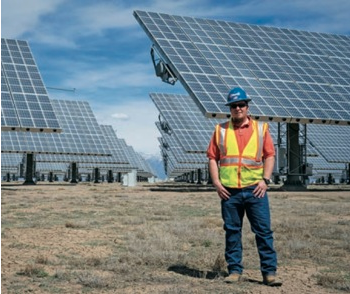 Brad Gagne is the facility manager for the Alamosa Solar Generating Project developed by Cogentrix on 225 acres in the San Luis Valley near Alamosa, Colorado. Photo credit: Dennis Schroeder, NREL 30547

We begin 2015 with solar energy generating 1% of U.S. electricity—a small, but very notable milestone. It shows how much growth it takes to make an impact on our over-sized consumption of energy.

Last year, we added 7.4 gigawatts (GW) of solar, a 42% jump from 2013, which was another very strong year. That number brings the U.S. total to 20.2 GW, and it’s expected to double in the next two years, when solar will produce 2% of our electricity.

“Every three minutes, the U.S. solar industry flips the switch on another completed solar project,” says Rhone Resch, president and CEO of the Solar Energy Industries Association. Across the United States, there are 600,000 individual solar installations—on rooftops, parking lots, landfills, deserts, and fields—supplying enough solar for four million homes. Four thousand schools now have solar, where the energy savings can literally make the difference in being able to pay teacher salaries and buy textbooks.

The U.S. solar workforce grew 22% last year, to 173,807—far exceeding the 93,000 people employed by the coal industry. Solar jobs have almost doubled since 2010, according to The Solar Foundation’s annual census. Almost 90% of new solar jobs are in installation, with SolarCity alone hiring 4,000 people in 2014. And they are well-paying jobs, averaging $22 an hour.

Solar employment grew nearly 20 times faster than the national average of 1.1%, far outpacing fossil fuels, which added just 20,000 jobs—and now, many of those companies are laying off employees because of low gas prices.

“One out of every 78 new jobs created in the United States over the past 12 months was created by the solar industry—nearly 1.3% of all jobs,” says Andrea Luecke, executive director of The Solar Foundation. Seventy-three thousand of them are in California, but they are spread across the United States.

The situation is even more impressive in California if we look at all renewable energy jobs. By the end of this year, there will be 500,000 in the state, the majority in energy efficiency upgrades for buildings.

What’s Behind the Growth?

The sharp drop in solar prices—down 53% since 2010—and cheaper financing costs are facilitating strong growth. Even if federal tax credits drop, Deutsche Bank expects financing costs to fall from 7% to 9% now to around 5.4% next year, helping new financing models like Yieldcos, solar loans, asset-backed securities, and retail bond offerings.

If Congress renews the Investment Tax Credit (ITC), Deutsche Bank expects solar to reach grid parity in 47 states by 2016—up from 10 states now—setting the stage for much bigger increases, says Vishal Shah, a solar analyst at the bank. Even if the ITC is allowed to expire, it’s not crucial anymore, he says, because of falling prices and ease of financing. The only thing that can derail these projections are moves by utilities and groups like ALEC (American Legislative Exchange Council) to stunt, if not eliminate growth, says Shah.

But even if they manage to cut growth to only 22% a year—half what we saw this year—solar would still reach 10% of U.S. electricity over the next decade or so, accounting for half the emissions cuts required under the U.S. Environmental Protection Agency’s proposed power plant regulations.

To keep the ball rolling, states that are getting close to meeting their renewable portfolio standards need to raise them. In California, for example, utilities are on track to use 33% renewable energy by 2020. Because of that, they are showing less interest in signing new long-term power agreements, which is making it hard for new projects to find financing. Governor Jerry Brown took care of that problem in his inaugural speech, when he proposed raising the target to 50% renewable energy by 2030. More states need to do that.

Clearly, if we want solar to grow at the pace we need to impact climate change, the tax credit should remain in force. But with Republicans dominating Congress, uncertainty prevails. Fears of the ITC disappearing are also holding back project development, because they would have to be completed by the end of 2016. Qualifying for the credit becomes harder the closer we get to that date.

But for now, let’s celebrate!

Rona Fried, Ph.D., is president of SustainableBusiness.com, a thought leader on green business known for its daily news and Green Dream Jobs service since 1996.